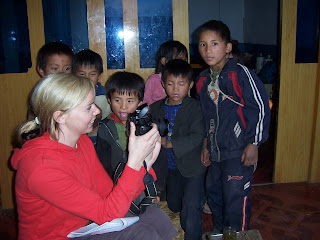 For a long time, being able to communicate in Chinese language was a dream of mine, and when this photo was taken, it was a very far-fetched one. Now, however, I actually do speak Chinese and I use it every single day at work. It's time to start chasing new dreams.

I’ve been dreading to write this post, that’s why I have neglected my blog for the last few weeks.

When I turned 29 on August 15, I hit a milestone, namely 5 years in China. On September 11 (which I know is a very sad day for most people) I’ll hit another one: 10 years of living abroad. That’s more than one third of my life, and pretty much my whole adult life (so far).

I’ve been thinking a lot about everything I’ve been doing for the last 10 years abroad/5 years in China, and I look back at most of it with joy. I don’t have any real regrets, just some “I wonder what would have happened if I would have done this instead of that….” But I believe that’s pretty normal.

Next year I turn 30, and it feels as if I’ll enter a new era of my life (might sound cheesy, but that’s how I feel about it). I will leave my 20-ies with some sadness. It has been 10 pretty amazing years of living abroad and getting to know myself through my adventures and experiences in different countries, not to mention my interactions with people from different backgrounds and cultures. I’ve met some pretty amazing individuals over the years, some of which I still consider my closest friends. All in all, life in the 20ies has been pretty d*** good.

However, in order to make the most of this “final year,” I thought I’d make an effort to do something a little bit special. Something for me, like fulfilling a far-fetched dream of mine. So, some days before I turned 29 I started making a list of things I wanted to do before turning 30.

Seeing that I’m a bit of a list abuser (I make lists of food I want to eat, and at work I am know as being a “list person” too as my “to do” lists have been passed around more than once) I made an endless list, including all kinds of silly things I wanted to do before turning 30, like “trying 50 new restaurants in Shanghai!” and “wake up with a smile of my face at least 70% of the time.”

In order not to come across as a mad lady (unless I already have) I decided to narrow it down to three big things. Three dreams that I wish to fulfil before August 15, 2012. And those are:

* Run a full marathon (and at least one more half)

So, there you go. My list. My dreams. My goals. Shouldn’t be that hard to accomplish, right?

Pretty much all of my friends laughed when I mentioned the marathon, but nodded when I said I wanted to write a book (it’s not the first time I mention it to them, as it has been my dream for as long as I can remember, I actually “announced it” to my folks at the age of 10 when we were having dinner. Then they told me I should become a journalist first, as one simply can't just “become” a published writer).

Me, on the other hand, think the book is the scary part. Running is just running, and although I’ve had a sore hip for 2 months now and haven’t been able to run the miles I should run every week (but I do other training instead, and I’m training pretty hard, 4-5 times/week so I believe I’m keeping fit still), that doesn’t worry me too much. If it’s something I have it’s physical willpower –and I’m good at pushing myself when it comes to challenges. I might not finish within 4 hours, but (unless this hip continues to torture me all year long) I will finish the race, even though it might be painful.

The book, on the other hand… is another story. Since it’s been a dream of mine for so long there’s a bit of sentimental attachment to it. It’s super scary, and there’s constantly this fear of failure going on in my head. But as a wise friend told me:

-You cannot fail something unless you’ve tried.

So I better keep trying.

And this is when blogging comes into the picture. How do I make time for that? I already have a full-time job, I always come home late at night (since I do my workouts pretty much every day after work), and my best time for writing (when my brain is feeling fresh and creative) is during the very early mornings (which is the time slot that has been devoted to my blog for the last 4 or so years).

So, now you see how this equation isn’t adding up.

And now you know why I haven’t been updating my blog for the last few weeks.

I still don’t want to say “OK, so this is it, I’m closing down, bye bye, thanks for reading all these years! (and all of you who left me nasty, anonymous comments or abusive email, now you might as well disappear from this platform forever!)” because who knows: maybe I won’t fulfil my dream. Maybe I will be back. Maybe I’ll miss blogging too much. Maybe I’ll simply give up and go back to what has been my daily routine for the last few years.

So, this is not a goodbye.

But a see you later.

And I promise, regardless if I succeed or fail, to come back and update this blog on how I did with my three big “to dos” before August 15, 2012. And who knows. Maybe also along the way.

Until then.
Posted by Jonna Wibelius at 7:18 AM 40 comments: