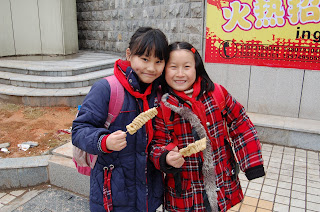 Will these 2 ever break some rules when the hit puberty?

Like I told you guys before, we are a mixed crew working here in the office in Finland: some Chinese, some Finns, some Swedes, some Danes, some French, some Estonian etc, etc… Yesterday one guy (western) thought of the genius idea (?) to find out what’s “cool in China amongst teenagers.” In order to so, he decided to have a chat with one of our Chinese co-workers: a fairly young, Shanghainese boy that we can call “Wang.” I don’t really know why Wang was chosen, but seeing that he sometimes wears a hat to the office (the funky, white kind) I guess some people might consider him a person “in the know” (about cool-ness amongst Chinese teens).

In order to rate the coolest thing you can do as a young, Chinese person, Wang was given several examples to choose from, such as: tattoos, piercing, drinking, dating, skateboarding, fireworks… and so on.

And what kind of rules then?

Well, any rules. According to Wang, going against the norm is apparently considered cool amongst Shanghai teens.

So what’s the most un-cool thing then?

Well, not that hard to guess: “telling on others/ being good friends with the teacher.”

According to Wang, every single class had a non-cool person, who spent every living second sucking up to the teacher. The cool kids, however, were apparently harder to spot.

I have to say that I’m a little bit surprised by Wang’s answer. I wouldn’t have necessarily thought that Chinese teens even regarded “breaking the rules” as something they would do… From what I’ve witnessed in China, those teenage kids are under so much pressure in school that they don’t even have time to think about things like “breaking the rules” in between their piano lessons, afternoon classes and mountain of homework. But there you go, turns out we aren’t that different after all. Being a fairly un-cool kid over here back in the days, I sure enjoyed a bit of rule-breaking myself:

-Hiding everywhere from in the bathroom to the drying cabinet during winter so that I didn’t have to step outside in the freezing cold during our breaks (one cleaning lady almost had a heart attack when she found me in the cabinet).

-Parking my bicycle where I wasn’t supposed to.

-Stealing an immaculate amount of pens and notebooks.

Wonder what cool kind of rules Wang broke when he was a youngster.

My students like to "break the rules" concerning the school uniform. They shorten the skirts, don't tuck their shirts in their pants, etc.

I was never cool!

Everyone has broken some rules in their lifetime, so it's not a surprise. But do people break rules for the purpose of gaining popularity? I certainly hope not...

Even growing up in China till I was about 10 years old, I could never understand what is cool there. Granted, I probably wasn't old enough to understand anyway.

I've had some hilarious moments in primary school in China, but they should not be shared in public and on the internet. But I can tell you, my parents and teachers were definitely not happy >.<

Kanmuri -haha, shorten their skirts. Young girls certainly grow up faster these days. I remember when I was a kid -I refused to wear skirts/dresses altogether.

I only broken the rules that I thought were stupid, like boys can only have hair that is shorter than 3 cm.... but in the meantime I got along with the teachers (only the good ones of course) quite well, one of them even allowed me to sell mineral waters and snacks in the class.

I've heard in Japan the children are allowed to have a lot of what they want. Then when they are 5 years old all of that stops and they are expected to be more grown up. The parents then enforce a stronger discipline & are quite strict, is this true & is this done in china too? Would anybody know if this is normal practice?

A lot of my Chinese friends (especially boys) told me they misbehaved a lot when they were in primary school. One notable example was a friend that used to wipe chalkboard dust all over the bottoms of his shoes and then stomp all over the desks in the classroom. He still doesn't regret how naughty he was back then because he sees it as a precious part of his childhood, which I think is hilarious!

My friends and I used to hide behind the piano in the music room to avoided having to eat in the lunchroom. That way, we didn't have to wait for the lunch supervisors to dismiss us before we could head out to the playground.

I, too, crossed the "big street" to go buy candy, and stole pens and pencils when I was in second grade. Sad thing was that I wasn't smart enough to hide them away once I stole them. Imagine my classmates' surprise at seeing me using their fancy new pencils!

My friends and I who performed these "misdeeds" definitely thought we were cool. Oh, what it is to be a child again!

Oh, and one more to add that I now find amusing: When I was in primary school in Hong Kong, girls with long hair MUST tie their hair up in blue or white ribbon/hair-tie to match their uniforms. Well, my mother did my hair up in ribbons that were blue with white polka-dots. I saw the headmistress on the MTR (the subway) on my way to school, and that morning, in the school assembly, she reminded the entire student-body that the hair ribbons must be blue OR white, never blue AND white. I was just six years old then, and was mortified that I had unwittingly broken a school rule. I guess breaking the rules was not always cool!