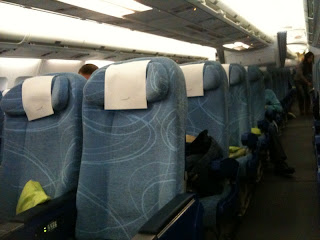 I got a big surprise when I flew back to China on Feb 3, during the Chinese New Year, and realized that the plane was almost empty. When we were about to take off from Helsinki the captain came out to the cabin, and said: “OK people, welcome to your private jet that will take you to Shanghai!” with a big smile.

We were a total of 33 passengers on a huge Finnair plane that has a capacity of hundreds of people. Although I see myself as a social creature, I have to admit that it was F A N T A S T I C to be on a plane with so few people! The air stewardess were super friendly, giving us extra snacks and telling us that we could move around as much as we wanted (but then gently stopping a passenger that was on his way to business class). One little Chinese boy got so excited he wanted to try every single free seat in the plane (!) and ran around and made a mess.

Once we landed in Shanghai it was the same thing: no lines to the immigration counters, and the bags came after 5 minutes.

I had friends flying to Shanghai from Hong Kong and from London, and then another one going from Shanghai to Sweden via Moscow around the same time and they had similar experiences. So, if you prefer a flight with a minimum of people/heaps of legroom, I can definitely recommend you to fly during the Chinese New Year. Tickets around that time are cheap too. Sweet! 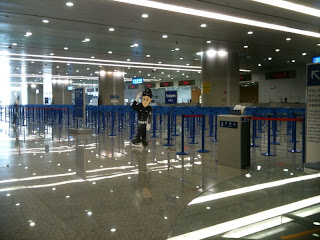 Immigration point at Pudong airport, Shanghai -no lines. No people
Posted by Jonna Wibelius at 7:44 AM

That's strange, usually lunar new year is the most expencive time to fly out of Korea. I don't know about flying into Korea, but I imagine it's similar. Do Chinese people tend to go on vacation at that time? Koreans more and more are taking their holidays at New Year rather than spending them with family nowadays...

Why is that? Is it considered unlucky to travel during CNY? I'm glad you had such a stress free 'commute' this time!

It's because most Chinese prefers to spend CNY together with their families... so they tend to stay in China. Before the CNY prices of flight/train/bus tickets are rocketing, but once the actual NY begins the whole country sort of calms down, a lot of places close and people stay in with their near and dear ones. I guess you can say it's like Xmas in the Western world. We all travel so that we can be home on the actual Xmas day and then there's not much action on airports.

i agree with you. travelling in a heavy chinese crowd is frustrating, they are rude and push through you. Or they're loud and noisy.

anonymous -when flying from Europe to China the huge crowd is normally Scandinavian and they too are loud, pushy and noisy. I think that's an universal thing.

I haven't yet left school, so it's a long way off, but I'd LOVE to live from place to place the way you do/have. How do you sort out jobs and things in other countries? I'm learning mandarin and would like to teach english in china, but there's a whole world out there for me! What is the best way to keep the freedom and fund the living/travel costs? What job best transfers from country to country- as in what job can you find and do anywhere? What is your actual job, if you dont mind me asking? I couldnt find anything on your profile. Thank you for your advice in advance!

wow I can not believe it's the same airport that I was in! unbelievable!

Wannabetraveller -It's not that hard to move around actually. U just need to know where u going and what u doing. I went from hight school to London to work for 6 months, then to Australia to study and do an internship for 3,5 years, and then to Finland to work for one year and then to China for... well, a bit of everything. I came here to study but I've also done a bit of work. Right now I am working full-time. I don't want to write exactly what I do, but I love my job, and get to use my Chinese, and that's the main thing! :)

I def think u can come here to teach Eng. I think the easiest way is to come here for a semester of Mandarin (pick a city that interest u -if u really wanna learn Chi I would not recommend BJ or SH, I would rather go somewhere smaller like Xiamen, Xi'an or Nanjing...) and then u can take it from there. It is easy to find teaching jobs once u are on the spot. Good luck!!!

Another day of loss of profit and contribution of emissions for the airline. 33 people paying no more than $1000 one way into shanghai to cover $100,000 of fuel and tons of emissions. Oh...the waste.

They are just too expensive and it doesn't make sense, because they spend about the same amount of fuel if they carry one person or 300. Why pay 2x more than KLM ?

@mountaincat - it's true that they would have spent the same amount of fuel carrying 1 person or 300 people. However, what probably should have happened to make sense profit wise and environment wise would be to clump everybody onto a plane on a specific date so there is a more efficient plane pool happening. There are some people who have balked at the idea huge emissions from 30 people travelling that distance and if I was a company officer, I would have balked at the loss and cost of just throwing money away to wasted fuel.

I've been on almost empty flights, they're wonderful. Sadly this is becoming more and more rare these days. Welcome back!

are you currently reside in China ?