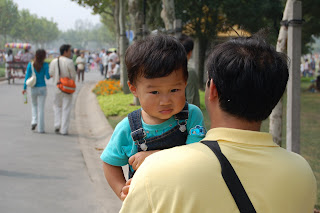 Gosh, why did you guys tell me to start watching Chinese TV?! I mean, sure, I have known I should do it for the last year or so, as it is supposed to be a really good way to practice your Chinese listening skills. But to be quite honest, I haven't got around to do it. And why? Well, for starters, I don't like to watch TV. I get all restless when I have to sit still for a long time without being productive. Also, I find Chinese TV programs to be.... quite... ehum... cheesy. But, nevertheless, I have now started watching. And I am hooked. On children's shows. Yesterday I spent 1 hour in front of the TV watching a show about a little boy who was experiencing difficulties as his mom got angry for everything. Someone 'above' must have heard his prayers because then he ended up getting a 'happy mom magic water' from some Chinese children living in space (gotta love shows with space kids!) that he sprayed on his mom, and then she was happy, DESPITE him only scoring 99% on his exam (instead of 100%). I loooooved this show. We are talking cheesy, but simple conversations, exaggerated acting, ridiculous plot and big, bold hanzi subtitles. Actually, I never thought I would say this, but I found myself constantly glancing on the hanzi, as I almost understand MORE of the characters than the speech?! Hm.. how did that happen? Only one year ago I remember naming 'reading characters' as my biggest problem. Funny when you improve without really noticing it.

As for the TV shows, I know I should probably move on from watching space kids handing out 'magic water' to help kid's unhappy mothers, but the sad truth is that after the kid's show came the news, and then my newly won gosh-I-am-quite-smart-confidence dropped like a penny in a lucky fountain. The news show used all 'grown up' Chinese and also, they spoke so faaaaast. Impossible for me to follow. I guess I'll stick to the kid's shows for now.

Some years ago I met a European girl in Shanghai who spoke perfect Chinese. She told me she'd only studied at the university for one year, then she got a job at a local kindergarten where she'd worked for 2 years. Being constantly surrounded by Chinese children, her Chinese improved and she was now fluent, although she admitted that her Chinese friends sometimes raised their eyebrows when they heard her 'highly childish' expressions.
Posted by Jonna Wibelius at 8:50 AM

haha,this is so interesting, it reminds me what I experienced while learning English. The hardest part--Listening to Weather Report, it is so fast.

btw, I reckon watching TV drama might also help, they are all subtitled(at least these I watched, a lot of them) and can be downloaded or watch online from website like youku and tudou.

Mark -yeah, I have been watching drama shows and news all week... until 2 days ago when I found this children's show on CCTV 8... it's about a Chinese boy called 乐乐 and I cannot stop watching it... :) (It's on right now! haha!) Much more addictive than dramas I have to say.

I think the kid's shows sound like a great way to practice the language...simpler words, slower pace, and usually pleasant!

It makes sense, learning slowly, with less-complex words and sentences.

I have to second Mark's comment... I learned most of my Japanese from soap operas. They were only 15 minutes long and highly exagerated (like your kid's shows). As long as you understood that everyone loved each other but wanted to kill each other at the same time, you're golden.

I tutor a kindergarten boy three times a week, and it's true - I learn so much more Chinese from him than I do from any 同學. Granted, I'm learning vocabulary like "robot" and "power rangers" and "sword," but beggars can't be choosers, hey? :) I say keep watching kids shows without shame. :)

I watch kids shows in Japanese everyday. As soon as I come back from work I turn it on and I "Watch" the anime. You don't have to watch it intently, just having it on as background noise still helps. Your subconscious catches more stuff than you realize.

I can't speak any Chinese at all, but watch sports programmes on Chinese TV, especially the ones in which China beats the world. The commentators jabber away all the time, so I suppose if you are a sports fan, this is a way to improve the language.

I have also heard about the children's show Jia You Er Nü (家有儿女).

Can you tell what your show is called? I'm not yet good enough to find it in CCTV 8's TV guide.

Here in the US all we get is CCTV9. I watch the Chinese sports segment which I find educational. There is the gal who teaches street survival Chinese to tourists. Id like to watch a Chinese version of Sesame Street.

Heh, it's so cute, reading that you like the kiddie's shows.

Do they have an equivalent for Seseme Street's Mr Snuffaluffagus? ;)

Be careful you dont get square eyes!

wow, thanks u guys! I was expecting at least 2 people to tell me to 'grow up' so it's really nice to hear that u r all supportive about my new TV addiction. I don't know what the show is called yet Afritsze, but as soon as I do I'll tell u!! The main character is called 乐乐 so the plots circulates around his life in school/at home. There are also some space kids involved :)

Zhefeng -sounds like we are hooked on the same show! :) It's on every day, right?

Yup. I watch it everyday. But my parents laugh at me about this, say "you are not 12 years old any more..." LOL

Good idea !!
Though I'm Chinese,I don't like most of the TV shows.
Now just watch news.

haha. I had fun reading! well, kid's shows definitely helps, I saw how my niece progressed on her English skills by watching Barney and Sesame Street! Not only that she now speaks perfect English and got the accent as well! haha So I bet these things really work! so, enjoy the show! ^_^

Hey, I replied to your comments on my blog. Thanks for stopping by and reading! I have to say, your blog is my new favorite thing to read. It's so interesting! I feel like we have a lot of the same experiences even though we're not in the same country.

I like this idea of watching Kids shows... I think I might start doing that.. But i think I need to watch maybe the shows for toddlers... not 8 year olders....

Jonna, my mom and my mom's side of the family speak Spanish, but I never learned it fluently. My mom is always badgering me to watch Spanish channels so I can improve.

I never bothered with it I suppose because learning Spanish never really interested me. I only tried because they wanted me to. It did pay off though. My wife's language, Tagalog, is about 40% adopted Spanish words, so I have a huge Tagalog vocabulary already! And I am interested in learning her language. ^_^