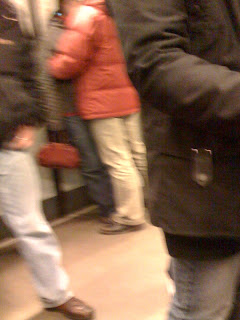 None of my Shanghai couple friends are very outgoing when it comes to showing emotions. I think I have seen one couple kiss ONCE, and that was at a nightclub far beyond closing hours. While holding hands is considered OK, snogging in public over here seems to be a real no-go.

That being said, there is a clear exception. A city-snog-zone. A place where you can kiss, hug and embrace each other, without worrying about taking stepping over the 'what's-considered-OK-for-public-snogging-line'. Yes, of course I am talking about the Shanghai metro/subway. While traveling underground a lot of couple take the opportunity to glance into their significant other's eyes, and maybe have a little snog while they are at it (no, we are not talking anything outrageous here... it's all innocent... but considering people so rarely show emotions while out in the open, it still kind of stands out).

Don't get me wrong, I don't think there is anything wrong with showing affection, however, the choice of place has left me puzzled. Why the metro? It's not really a sexy place, is it? Why not.... let's say.... the mall? Or the park? Or the street? I wonder if it's the same in other Chinese that have an underground system. Do people there use the subway for snogging too? Or, is Shanghai's metro officially China's number one public snog spot?

While I am continuing to feel confused about this, I might as well list some other popular metro activities:

If I have forgotten something, feel free to add.

Oh, one more thing. While metro snogs might be common going public about them isn't as hot. In the beginning of last year a couple filed a law suit as their metro snog was made public. Yikes!
Posted by Jonna Wibelius at 9:44 AM

i agree with you completely!
one time me and my family were on the transit from a parking ramp to an airport and there was an asian lesbian couple going at it a foot away from us.
i dont get whats so romantic about public transportation.

I don't think there is anything wrong with snogging in public (if you keep it innocent!), I am more curious why people have picked the metro as their fave snog spot...

I also tend to see couples having little tiffs on the subway...usually I see the girls pouting about something or other.
I have also spotted some acceptable snogging escalators, but it is odd. It seems that there are only a few, and they always seem to be the same ones! Others are off limits. I haven't figured out the "criteria" for these snogging escalators? Anyone?

Where does the word snog come from? I've never heard it bofore...

In London, THE favourite snogging place appears to be the escalator in the metro station. Not much on the train itself, but as soon as they get on to the escalator, it seems to tuen them on!!

Haven't seen much kissing on the Guangzhou metro. In addition to your list of what is done on the metro, add moving from compartment to compartment. Guangzhouites love doing this - dont't know why ?

I'm so closed to sofa(沙发the first comment of an article). Your post is always have some very interesting viewpoint, and I like it very much. If you write a book, I wish I will be your loyal reader.
Zhege phenomenon is very common in Chinese subway. Maybe peple learned it from laowai. Ten years ago, Chinese feels shamed when see the leading actor kiss a girl in the film. Together with the reform and open, we feel there is more free space to show our motions. But Shanghai is undoubtedly the no.1 city open to the outside world.
After all, love is the very same all over the world, isn't it

Snogging? That is such a weird word for making out. Hm, the geographical differences of terms; how interesting. =P

why not confining ur snogging within the 4 walls :D?

Jonna,hi,I agree with you too! Maybe it's a kind of show-off I don't know.

"Making out" in American english... "snogging" is who's English?

Perhaps places like Shanghai and Beijing the Public Transportation is so massive that you would NEVER bump into someone you might know... perfect place to make out!

But I think people prefer the more secluded yet public area...a bit more exciting don't you all think??

It seems like the underground brings out weird things in people. In Japan, people do not snog. but you'll have your usually polite Japanese people tackle you without even apologizing...

Yeh snogging is a work used in the UK. Though I don't think it's a very nice one. Ick!

I live in Montreal, Canada and was shocked once to see an asian make clipping his nails in the subway train, not bothered by where the clippings went. I guess that this is a cultural thing. YUCK!

I love the photo you included with this blog! It looks like you took it on the sly. :)

Yeah, "snogging" is definitely British English. My husband is British and says it all the time. It usually means "kissing" or "making out".

Nanny state this one is !

Don't forget playing an MP3 player at 200% volume with no earphones.