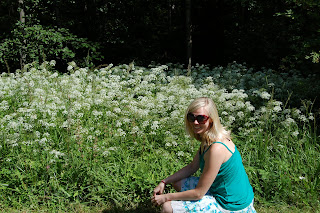 Summer is in the air!

Gorgeous day here in Suzhou! Since it’s a public holiday I let myself sleep until 7am when I got up and went for a morning run. Although it was stunning out there I realized that 7am for running is almost a bit too late. It was getting quite warm towards the end (the windy weather made it bearable though) and also, the streets were a bit too crowded (Chinese people sure are early risers!) for my taste. I guess I have to stick to the 5.30am routine in the future.

Since April 30 is a bit of a big thing in Scandinavian countries (called Valborg, Vappu, glada vappen depending on in which Scandinavian country you are) we today are going to celebrate that (one day later) with brunch at the German, five-star hotel Kempinski hotel. My boyfriend’s company is forking the bill, so thanks for that! I’ve already had their brunch once and it is truly amazing… especially the desert section! With last night’s + this morning’s run I’ve also made sure to make a lot of room for guilt-free indulgence.

Wishing you all a wonderful long weekend, apparently it’s supposed to rain tomorrow so I’ll make sure to soak up some sun today. 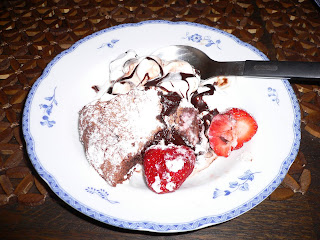 It's still April here for a couple more hours. I love May. It's the beginning of nice, consistently warm weather.

5.30am routine! You are an early foreign bird. Happy holiday!

Is that.. brownie + ice-cream?
Looks kinda like Finnish mammi.

Why is April 30th a big deal in Scandinavian countries?

That looks delicious. Here in Japan it's the start of Golden Week. Starting tomorrow, I'll be off until next Wednesday :D

You get up at 7am on your days off? That's the time I wake up when I work! I wake up at 10am on my days off lol

Have a great time and please eat something extra for me, OK?

We went out for a hotpot lunch today and I burned myself really badly on a piece of tofu. Man, that stuff is LETHAL. Be really careful not to eat it too soon after it has come out of the pot, as it can slide down really quickly and burn your inside. For a few minutes I was sure I was going to end up in the ER.

I'm off to the gym in a bit, and I'm sure the thought of your morning run will move me to stick with the treadmill a few minutes longer than I ordinarily would have done, so thanks in advance for the much-needed inspiration!

Have a great weekend!

haha! waking up at 7AM on a holiday is not late at all...

i'd wake up at 11am and go straight to lunch if i could. lol!

Soak up the sun and be glad you're not still living in England! It's all sunny at the moment but there are clouds overhead that threaten to make 1 May miserable. Hopefully it won't - I have a speaking exam today!
And wow, 7am on your day off? That's amazing.

Beautiful picture of you and the white flowers. And thoughts of Spring. Here in South Carolina, spring moves very quickly into summer. We have four seasons -- Almost summer, summer, still summer, and Christmas.

Glad to hear you had a good day. It's so freakin hot here. I still can't manage to get myself out of bed early enough to run in the morning. Heck, sometimes I can't get myself INto bed until morning.

What's this holiday you mentioned?

My weekend will be a bit tough, but not too bad. We're moving. Luckily it's just 15 minutes away so it won't be too hard to move all of our things!

Observer -May 1st is not a public holiday in the US?! I also love May!

Hang -thanks! yup. Love the early mornings when the city still sleeps...

dfvxc -yes it is!! And oh my, now u have made me seriously impressed.... U know mammi?!?!? U've lived in Finland?! I didn't know mammi until I spent one year in FI (2005-2006..). Do u like it? I thought I wasn't going to, but I really do! Especially together with some cold soy milk.. yum! A fairly healthy snack. Better than the brownie and the ice cream at least.. hehe.

Kate- In Sweden, Walpurgis (Swedish: Valborgsmässoafton or Valborg) is one of the de facto public holidays during the year.

On the eve of the festival (April 30), huge bonfires, which should be lighted by striking two flints together, blaze on all the hills and knolls.. and then we sing songs about the arrival of spring. I don't know why it is so 'big' in Scandinavia but I guess it has something to do with the fact that the scandinavian winter can be very long and quite rough, with its limited amount of daylight... (especially up north) so we are sooooo happy when the spring finally arrives that we need to light a bonfire, sing and celebrate it! :)

Kanmuri -Oh, in China it used to be a 'golden week' too but not any longer... enojoy your days off! As for my early mornings.. I wish I could sleep until 10am but I can't... no matter how I try. Always wake up around 6-7am...

Careful with the tofu... I've also burned myself a few times, especially during hot pot dinners.. I'm always too eager to stuff myself. Hehe. Anyways, have a great wknd u too and I hope u had a good gym work-out!

reyjr -but if u go straight for lunch u miss out on breakfast.. which is the best meal of the whole day...?! oh, I could never do that! Too much of a breakfast lover!

froovy-josie -speaking exam on May 1?! Should be banned... I hope u did well! Shame about the English weather... hope it gets better soon!

Butler and Bagman -oh so u pretty much have summer all year around?! Gosh, I'd love to live somewhere like that!!!

Valborg, Vappu, glada vappen - I'm with Kate What is it?

Also with the boyfriend paying the bill will there be fighting over who pays at the end?

Will you bring extra friends with you?

Will they all say "Hey Na is here" when you walk in to the restaurant?

Will your boy friend start yelling about his food being cold and not want to pay?

Will you be called Fat from the waitress?

This could be a culmination of everything that has been covered on your blog as of late isn't that WILD !! The Lord prepares us for everything in our road of life if we're on the alert !!

And please don't clip your toe nails on the train at the end of the evening - It's definitly a party killer !!! ha ha

I dont think we celebrate it in Norway, never heard about it.

Hi! We had our traditional finnish piknik at Century Park. Piknik included potatosalad, sausages, sparkling wine, beer and Koskenkorva! There's few pictures in my blog, but unfortunately the text is in finnish...

Happy Mayday! Whoa! that dessert pic sure made me drool! Gimme some!

A swedish take on China. cool!
When time permits i shall browse through all your posts.

Feel free to drop by my blog!

OK this is going to disappoint you: I saw it on TV... Can you pretend to be still impressed? :P

I love food, love cooking, love learning about food, love watching foodtv, love trying diff foods. Just never got to scandinavian food yet as its not really available. But their reputation isn't that great so I'm not in a huge hurry either :P.

dfvxc -still impressed, not even pretending. How many ppl remember Finnish dishes seen on TV?! You're the first one I've met so far! :)

Where do u live? If you are in a bigger city that has an IKEA store, you should def be able to try some Scandinavian foods, such as salmon, meatballs, 'knäckebröd' (hard bread), Swedish cheese, cookies, chocolate, schnapps (not the sweet kind, this is hardcore stuff) and Glögg (during Xmas). Nothing like French food but to me it's delicious, at least now when I live abroad :)