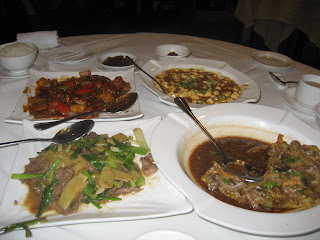 Yesterday I ended up in an office on the other side of Suzhou city (SND –Suzhou’s New District). Around one hour before it was time to go home I called the ’gypsy taxi driver’ that I bumped into on the road some weeks ago and asked if he could pick me up (He charges 30 yuan for a fare that normally costs 50 yuan). Sure he could.

But, he was a bit too eager to come and get me, and called me back already at 5.30pm, saying he was on the parking lot waiting. I wasn’t supposed to leave until 6pm. I thought he would get annoyed and leave (waiting for 30 min at some parking lot won’t earn him any money), so imagine my surprise when I walked out at 6pm and saw him waving at me from his car. He then drove me home, chatting to me the whole way (he was sooooo curious and so happy that we could communicate, telling me about his family back in Henan –he had 3 kids, 2 daughters and 1 son, and they were all in school. And he saw them once a year). When he was driving I asked him if the fare would still be 30 yuan, despite him having to wait.

Although I’m a total softy for nice people so when I got out I gave him 35 yuan. He almost refused to take the extra 5 yuan that I offered, saying that it wasn’t my fault that he had had to wait. Sure, he was right, but I still felt like giving him a little bit extra. In the end he took it, and he looked sooooo genuinely happy. I was waving with two hands once he drove off.

China’s definitely not a place where you tip people for services, but sometimes (when people are just really nice, or make a big effort) I make exceptions. Like once when I handed in my Sony recorder for repairing and the guy told me it would take over 2 weeks and I almost burst out in tears because I needed it so much. Then he went and got me his own, Sony recorder and said I could use that one for the next two weeks, being completely modest about it. I thanked him so many times that in the end, he almost pushed me out of the door. When I came back 2 weeks later I had bought him a small gift (just some candies) but he refused to take it and just pushed it back at me. Tipping him didn’t work either. However meager it felt, I just had to say ‘thank you!’ and walk away.

So, when you bump into people like these 2 guys, it’s hard to imagine that just some blocks away there are people that have been tipped too much and too many times, and therefore act completely superficial when it comes to giving back change. That’s the case with many of the waiters working at the restaurant strip near our house here in Suzhou. This is a popular restaurant area, filled with (mainly) foreigners 7 days/week. Although the food is nothing special, the area is quite nice (mainly because you can sit outside), but you can tell that the waiters working there have been tipped a bit too much.

About 1 year ago (the last time I was there, I have boycotted it since) and ate with three of my friends, I paid for our meal and was expecting to get 25 yuan in change back. We waited for 20 minutes before I went to ask about it. The staff acted completely oblivious, asking me things like: “What change!? There was no change from your charge?!” making me lose my temper. In the end I went up to the waiter who had taken the money and asked him for my 25 yuan. He looked at me as if I was garbage from the trash, said something like: “oh my, you want your change back?!” and pulled a 20 from his pocket and threw it on the table. “25!” I said, which resulted in another superficial grin before he reluctantly pulled another 5 yuan from his pocket. Yeah, like I said…. I’ve never gone back since. I realize that this situation occurs many times every day, but unlike me, many foreigners (especially after some beers) don’t bother to ask for their change.

Since China’s a traditionally isn’t a place where people tip, it’s interesting to see that there are so many different attitudes towards it today…
Posted by Jonna Wibelius at 7:57 AM

I feel so bad that the nice taxi driver only gets to see his kids once a year :(

What?? Not just expecting a tip but not giving back change?? In China???

No tipping in Japan either. I just love it. I hate it in Canada when I fell obligated to give tip when I didn't even enjoy the service!

I was on a motorcycle with my wife. The cost to go across the city was 5 yuan. Now since I survived the trip, I gave the driver 10 yuan, and said keep it...or at least indicated for him to keep it. I tell ya, my wife nearly had a heart attack!

I figured the guy didn't kill me in the crazy Hunan traffic, and I wanted to make his day.

In Hong Kong there is an automatic 10% added as a service charge to all meals, so I generally don't tip at all. I tip the odd friendly cabby, but they don't expect it either. To bad about the restaurant experience, such an unpleasant and unnecessary thing. I think the genuine thank you is often enough in China. Chinese people are proud of working hard it seems and don't want to feel they need handouts. I will ask some of my friends about this kind of thing. It's good stuff to know for a foreigner.

I've ranted about this before myself. Not in a blog, since I wasn't blogging at the time, but about quality of service vs expectations of a tip. I've had some really crappy service before, and the people I was eating with still wanted to leave a tip on the table, as if they were afraid of suffering from some unknown repercussions or bad luck. I, on the other hand, only tip when the service is at least acceptable. In the US anyways. I do feel obligated to leave a tip when I eat somewhere, mostly because a lot of waiters and waitresses in the US are paid a low hourly rate, like 2.50 an hour, and have to rely on tips to make up the remainder. Somehow they're an exception to the minimum wage laws. Personally, I'd prefer if they were paid a regular hourly wage, and tips were what they were meant to be: tips for good service, rather than something you feel obligated to leave on the table.

Here in Singapore, there is no tip expectation. It's just not part of the culture. The same goes for the Philippines. It's very refreshing, especially since I have yet to receive any exceptional service from a waiter or waitress here.

I wish there was a way to strike a balance, where you could leave tips for people that give exceptional service without feeling obligated to do it. That would foster a more customer oriented service experience. In a perfect world right?

What? I've visited places whre its is a tradition to give a tip. In Beijing I had a different experience, they did not reject my tips! Any other experiences on that?

Tipping is a disease.

A cafe I like to frequent has a sign at the till saying: 'Tipping is not just a place in China'.
Needless to say, I have yet to tip there!