Back home with the folks for a quick stopover before I begin next week’s workweek in Stockholm (I didn’t go home for a break, but to work, however, to recharge the batteries at my parent’s place during the weekend was an obvious choice). It pretty much looks the same here as it did when I went home for Christmas 2 months ago: There’s a massive amount of snow on the roads. It’s cold. The forest consists of a bunch of tempting, yet none run-able forest tracks. Still lovely to be home though!

Yesterday we went to the fairly new IKEA in Malmö. It’s the world’s second largest IKEA shop (44 000 square meters!) and as you might be able to imagine, it was huge! I kept wondering why they didn’t build it in Shanghai instead though, considering how little people there were, and considering what a people-packed place the IKEA in Shanghai is…

We then went on to Lund to help my little brother unpacking and building all the furniture he bought (yeah, the IKEA trip wasn’t for me even though I obviously couldn’t help myself and ended up buying some small things), as he has recently moved into a new student flat. Pretty nice deal for students in Lund (when they eventually find a flat, some people have to be in a housing line for 1 year), he only pays 9 months of rent, as the summer months are free of charge. Sometimes Sweden’s real good. 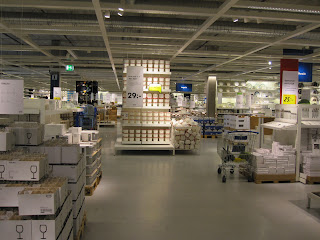 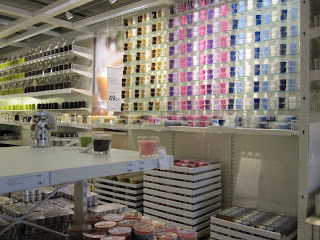 My favorite IKEA section! I know it's cheesy but I cannot get enough of IKEA candles. They smell so nice...

Funny thing was that as we were unloading the car a bunch of Chinese students walked by.

-I swear, it pretty much snows like this in Beijing too! One of them said, while the other ones objected. I was tempted to shout: 你们好！but managed to stop myself.

After putting together furniture for my brother for a few hours (mom and dad seriously thought is was a lot of fun? I was falling asleep) we went on to H&M and I, insanely relieved of the fact that in Sweden you don’t have to feel crammed everywhere you go, ended up getting some essentials (gosh, I feel like such Sweden nerd: IKEA and H&M in one day. I swear –I did not start appreciate these two shops until I moved away from Sweden when I was 19. Before then I used to dread shopping at either of these shops). 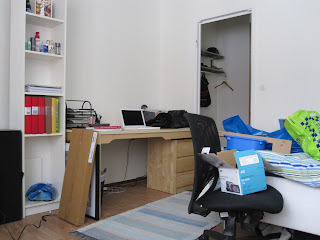 Typical student flat of a 20-something in Lund. 26 square meters. 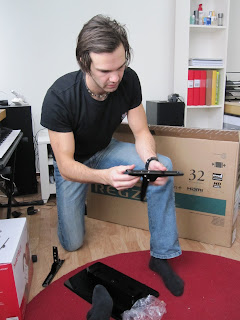 Joel's setting up his TV (he promised to help me out the day I decide to move back to Sweden. I'm clueless of how to do some things that is completely normal to him).

Then we enjoyed a “fika.” Fika is one of the most common things to do in Sweden. It basically means hanging out at a café with a good friend/family member, enjoying a cup of coffee (which is the most compulsory part of a “fika”) as well as a small snack (optional –but I always go for it). At the café I bumped into an old school friend. Very old actually, we went to the same class grade 1-5! (I didn’t recognize her until she said my name, which is a bit alarming –she recognized me? Do I look the same as I did when I was 10? I was pencil thin back then. Hm… suppose it’s not a bad thing!). That was kind of weird, but fun. Guess who she’s dating? The same guy my oldest sister used to date when she was in highschool?! Hahaha! This place is too small!

After fika and H&M we went home, spent some hours relaxing, and eventually enjoyed some homemade salmon quiche. Yum! Spent the night watching the winter Olympics while scratching the cat behind her ear, thinking to myself: “Ah, there’s no such place as home!” And really, there isn’t. Regardless of how cold my feet are every time I walk outside. Love being back in beautiful Sweden!
Posted by Jonna Wibelius at 3:53 PM

So Sweden is still "home" then?

hans -yep, this is where I was born and grew up, and this is where my family is -it'll always be home, no matter how long I live abroad.

I love the birds chirping in the background of the video =)

Tarja -yeah, except for those ones it is bloody quiet! haha! Typical morning here in Sweden

Great short video, Jonna. So peaceful and quiet... you can almost hear the snow fall!

I suppose you can use this one to describe."金窝银窝不如自己的狗窝"
The same as english "East West home's best".
Enjoy your days in Sweden.

I am an expatriate lived more than 6 cities in Australia and China, Qingdao>Jinan>Auckland>Beijing>Melbourne>Sydney. I have a feeling of lost about where is home...........maybe the world is home, but just too big to navigate..

I have just discovered your blog recently and this is my second visit. When I was snacking at IKEA last year, I asked my other half if people in Sweden actually shop at IKEA. Now I know that they do! One pathetic thing I do when I watch Wallander is to spot IKEA products. LOL.

Nice, it is snowing in Sweden. I grew up in Sichuan where it never snow there :(

Here in Southern California it never snow neither :( But lots of Sun shie :)