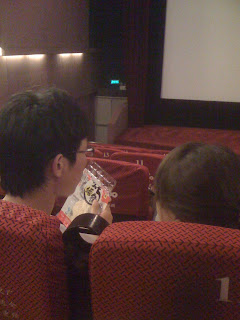 I can count the number of times I’ve been to the cinema in China on my left hand. It’s probably been 3 years or something since the last time. So yesterday when we were out walking, and realized that a cinema was showing “Inception” in English, we decided to go for it. Only to once again be reminded why one should stick to 8 rmb DVD:s when in China.

Overall, the cinema looked OK. Enough leg room (kind of like an airplane). Comfy seats. There are small things such as bad air-conditioning system, but at the same time, if the air-con would have been on full blast that would have been bad too. So not going to complain about that. What was not so nice, however, was the fact that the whole cinema salon smelled like fish. In Sweden you bring a bag of candy/crisps and maybe a soda when going to the movies. In China you bring dried fish snacks.

Then there was the talking. I felt really old when I turned to my “neighbour” and asked her (a mom and her grown-up daughter) to please stop talking during the movie. It’s definitely OK to react, to scream or to laugh when at the cinema, but to constantly sit and talk? It got a little bit better when I told them (they were quiet for 10 minutes) but then they started again, and eventually they both left when there was still 30 minutes left of the movie.

Another thing worth pointing out: the amount of people bringing whole junk food set meals to the cinema! I almost felt inspired, especially considering how cheap a meal of Maccas is in Shanghai. Also, way better than all that dried fish, regardless of the constant bag sound.
Posted by Jonna Wibelius at 7:24 AM

Ha!Ha!watching a movie in a 'fish market'?? In Malaysia, the cineplexes allow the pop corn and the drinks bought at their kiosks. In those days cinemas too weren't pleasant as people ate 'kuachi'( melon seeds)and made a lot of noises just snacking and yes, they talked too. All this has changed for the good.

Korea is similar, but now with the introduction of nachos and hot dogs at the cinema i think it's changing. I've never been so surrounded by dried squid that I could smell it. Then again, I find Koreans don't buy a lot of things to eat during the show, though popcorn (and caramel popcorn! is standard).

They also aren't very strict about bringing food in (but people do it in the US too) so seeing someone eating mcdonalds in the theater isn't unheard of.

Sporting events are the best though. You can walk in with boxes of pizza and fried chicken, bags full of beer and soda and no one bats and eye. Of course buying it in the stadium is only slightly cheaper as well!

keats -yeah, kinda... not very fresh. I long for when China gets similar rules!

조안나 -wowowowoowow, that's just how it should be!! Caramel popcorn and no maccas at the cinema, and then BYO pizza and wine to the football! Sounds like dreamland to me!!

I hate when i am watching movie,while the couple who site beside me kiss and talk,,it is disgusting,,,^^

there is better in Hong Kong.
we always have cips or popcorns only (i always think popcorns is the best match in with a cinema!!!)

i think some "luxury" cinema in Shanghai is better? actually, i have not been in any cinema in China before.....

Jane -A small kiss and whisper: no probs. Making out and talking loud -getta room!

mantse -yeah, I better locate those luxury cinemas for next time.. in some 2 years or so! :)

I have been to cinema in China too and it was amazing. It was clean, nobody was walking or answering phone. Some people was crying during movie. It was touching.

When I went to cinema in England it was very different. Seats was so dirty and food everywhere.