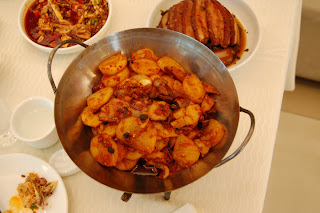 Can all this heavenly goodness be bad for you? Say it ain't so!

To follow-up on yesterday’s post about how healthy/bad Chinese food is, I’d like to post about something else that I’m probably one of the last people in China to even hear about, namely the “Chinese Restaurant Syndrome.”

I first heard this some weeks ago, when a colleague of mine came back from the hospital where she had been “diagnosed” with it, after experiencing numbness/burning in her arm (that came and went and then once stayed with her for a whole day), numbness/burning around her mouth after eating at a restaurant, high blood pressure and dizziness. She decided to head to the hospital mainly for the blood pressure, and that’s where the doctor asked her if she ate a lot of restaurant food.

Apparently, the food syndrome is believed to be caused by MSG (monosodium glutamate) that is so often added to food over here for flavour. It has not, however, been proved to be the substance that causes the condition. It’s just a belief.

According to the doctor, it wasn’t mainly Chinese food that was to blame for her condition, but all food cooked in restaurant –western food too.

-Chefs from all kinds of cuisines use MSG for flavour in China, said the doctor.

My colleague was told to stay away from the restaurant food and to follow a LCHF (low carb, high fat) diet to get rid of her problem. I felt very hesitant when I heard this. Sure, cooking your own food to make sure no unwanted, artificial flavour is added sounds like common sense, but following a strict diet and cutting out all carbs? Naaaaah…not really my cup of tea. And I really wonder what the doctors think when they tell their patients stuff like this: if you cut carbs out of your diet it must be a lifetime thing if you want to keep your weight down. Don’t believe that you can suddenly start eating carbs again once you are down to your ideal weight: you’ll get a lot of stomach problems + you’ll gain back all that lost weight. But, apparently it’s easier nowadays to tell people to cut things out of their diets and get a “quick fix” rather than having them making big, lifestyle adjustments (I am very traditional and I believe a lot of problems can be, if not cured, than at least helped with exercise –it does not have to be running or weight lifting, it can be pilates or yoga –something that is soothing, calming and relaxing for people with high blood pressure).

Anyway, what is your opinion of MSG and the Chinese Restaurant Syndrome? I have never experienced any problems myself. This colleague of mine is the first one I’ve heard of to be diagnosed with it.
Posted by Jonna Wibelius at 7:14 AM

I have never heard about this and during this first year here haven't got any problems with restaurant food or even with street food. Not even a food poisoning.

When I had some skin problems and went to see a Chinese doctor she gave me a list of things I couldn't eat. The list had all my favourite things from pineapple to beef! Sure I couldn't follow that order and to be honest, didn't believe it either.

Chinese people also think that with skin problems you shouldn't eat spicy food but I'm not sure do agree with that either.

MSG (monosodium glutamate, weijing) is a naturally occurring chemical in nature. In Asia MSG used to come from seaweed, though now it is chemically synthesized. MSG is a flavour enhancer and is all pervasive in Asia. At $1US/7RMB for a 2kg bag MSG is really cheap.

MSG allergies are common here in North America, including the symptoms you described and more. Many Chinese and Western restaurants here in Toronto have put up "No MSG signs" in their windows, due to the adverse side effects of MSG.

You really cannot get away from MSG in Asia. Not only used in restaurants, many families that have guests for dinner will add MSG to their home cooked meals. If you are concerned, discretely ask your host to not use MSG. China, Japan, HK, Toronto, MSG is used everywhere.

I have observed myself over the years, and despite the repeated denials by doctors, I do believe that foods with lots of MSG are related to my migranine headaches and sleep disorder. Many people in Taiwan do believe the same, and that's why restaurants that claim to be MSG-free are starting to flourish here in Taipei.

Whatever causes the syndrome (and MSG certainly took the rap until quite recently, at least in my experience) it seems that, like so many allergies and sensitivities, the effect is often cumulative and emerges after repeated exposure over time.

Since so many other allergic reactions are actually responses to multiple allergens that combine together in certain circumstances to produce a "perfect storm," I'm wondering if the same could be true of CRS. Perhaps that could explain why reaction patterns are so hard to pin on
any one trigger.

As for the drastic diet changes -- maybe the doctor was trying a sort of detox. Kind of like rebooting a computer: you flush out the system and hope that when it starts up again it will be better able to handle the stuff you throw at it. Certainly that's more or less how immune-suppressive therapy works in dealing with autoimmune conditions such as lupus and MS. Just a thought.

I must admit I don't see what the second part of your post has to do with the first. Sure, I'd agreee with you if we were talking about cutting down on the carbs for weight issues ... but, eh, was that really the reason here?

This might explain my heavy weight loss from lack of appetite and sickness during my time in China.

I don't know anything about Chinese health care, but from what I've read here it seems like a splash or two of evidence based medicine wouldn't hurt.

(Essentially there's no scientific evidence that MSG causes problems and no one is quite sure what causes CRS; MSG has just got a really bad rep! I imagine that by believing MSG to be the culprit, some people start "getting" the sypmtoms.)

MSG-caused adverse reactions have been known for many years--I remember it discussed even in the 60's. As usual, it seems to be an issue of overuse--after all, one can "overdose" even from drinking water.

The assertion that MSG is "traditional" (that is, using the white powder form, as opposed, for instance using seaweed for flavoring) for Chinese cooking is bogus. Traditional family cooking never called for MSG. I think cooks have just gotten lazy and use the ingredient as a shortcut for making stock.

MSG is actually banned in Australia. I'm not exactly sure how healthy it is, as I've never done any research myself but isn't it similar to salt? And most westerners should know by now how unhealthy too much salt in your diet can be. I've come away from eating at chinese restaurants before with headaches and sometimes after eating food here I feel really thirsty and get a 'buzz'. I'm sure that MSG does something to your body and they add it so freely to nearly everything .. even street vendors!

MSG using rate is reducing in East Asia because many people think it's the culprit causing hair lossing. But the reason why Asian are less allergic to MSG may due to they drink more soup when eating(like dilution).

Eating food with MSG gives me a terrible pounding headache and nausea for about 12 hours. The problem is that I can’t taste it, and the headache starts about 40 minutes AFTER eating the meal.

I do not need any research to prove anything- I already know I have an intolerace. It has no bad effects on probably 95% of people. A doctor explained to me once that most people have enzymes in their blood which can quickly break down MSG in a few minutes, but for people like me, it just goes round and round for hours.

Aspirin does not help. A couple of times, when I felt the symptoms coming on after eating a meal, I have induced vomiting in order to avoid being sick the rest of the day.

I didn’t realize that I had this intolerance until I went to Taiwan to learn Chinese. I always ate lunch at restaurants, and had bad headaches several days a week. I did a bit or research and narrowed down the possibilities, and decided it was MSG. After I learned which foods to avoid, I was fine. It is hard to avoid in China and Taiwan. Yes, it is in some American foods, too, and you have to read labels carefully.

Some cooks know they are using it, but many others are using it without knowing it. That’s because they are using certain brands of seasonings called something like “Naturally delicious seasoning”, etc. that contains MSG along with a few other ingredients.