One of the best things I've done 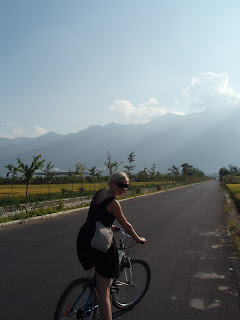 People back in Europe or the US (that haven’t been to China) often have the wrong kind of image of Chinese people. Many people seem to think that all that Chinese people ever do –is to cheat foreigners. I often get questions from friends or people that are coming here for a visit, wondering how alert they should be for “scams” and such. And sure, there are some infamous scams (like “art students from Beijing/Xi’an/Suzhou who try to sell you their crappy paintings after befriending you on the street” –but you easy learn how to spot those ones), and every now and then a taxi driver will make one extra turn in order to earn some extra kuais (I have to say though, that I don’t think taxi drivers are bad guys. They are often helpful and friendly and keen to get you where you want as fast as possible. For their own sake as much as yours), but generally speaking, I don’t think people here cheat you that much.

Yesterday was a day when I realized how awesome Chinese people really are. I first had a great day at work, chatting to my Chinese colleagues that I like a lot, and then went for a haircut –I have been going to the same Chinese girl since I came here, so for soon 5 years. About 1 year ago she discovered that I can speak Mandarin, and since then it’s been a pleasure to go for a trim. I don’t even have to tell her what I want her to do with my hair –she already knows. And she does those small little extra things for you that a hairdresser back home would never do. Also, she works together with her sister and brother (biological) and they are all just lovely, friendly and helpful –without being too much. When I left them last night they were all standing together, waving me off with big smiles on their faces.

On my way back I passed a fruit stand and decided to get some bananas. It was an old, Chinese man selling the fruit, and he watched me with an amused expression on his face. Every time I touched a fruit, he ran up to me, touching the same fruit, and telling me its name in Chinese. “I know, I know!” I finally said in Chinese with a smile, and that resulted in his amused expression turning into a delighted one.

I ended up buying heaps of stuff, strawberries, bananas, kiwis… and I didn’t even ask for the price. Only when he was filling up a bag with strawberries did I ask how much they were.

-Don’t worry, I won’t charge you much.

And he didn’t. In the end he asked for 9 kuai (!). When I gave him 10 and said it was OK like that, he came running after me with 1 kuai, smiling, and telling me to come back soon again.

I walked home feeling as if I was walking on clouds –not for any specific reason: not because I bought cheap fruit or had a good haircut or because I really like my co-workers: But because I’m so happy I live here and can communicate with all of these people, and share stories with them. Yesterday my hairdresser ended up telling me about what it was like growing up in a poor village in Anhui –and it’s just so interesting and fascinating to listen to stories like that. You would think it would be a sob story –but it’s not. More often it’s a down-to-earth story of how someone who’s had very little, still has managed to make the most of it. And that’s pretty fascinating and inspiring if you ask me.

Although I’ve had my ups and downs with China (and not to mention with learning Chinese) I have to say that coming here, and especially learning this language, is one of the best things I’ve ever done. 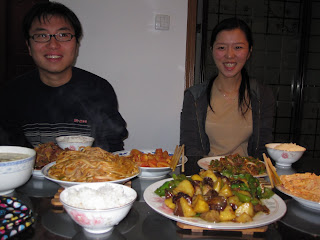 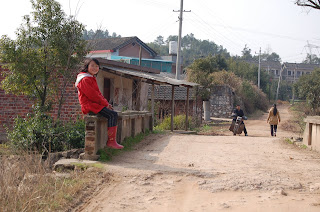 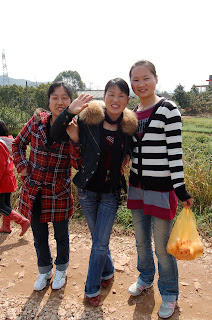 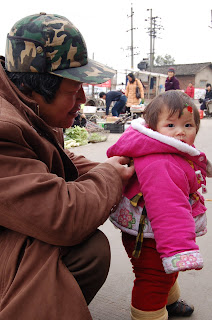 Posted by Jonna Wibelius at 7:11 AM

One of the OTHER best things you've done? You've shared your journey with the world. Thanks to you, people who will never see China get to learn some of what you've learned and enjoy what you've enjoyed.

I hope you won't think I sound condescending if I say that I am proud of you.

flyingfish -I don't find it condescending at all. Thanks for your nice comment! :)

This post so graps what living in China is about for me, too. Forget about the pollution, greasy food and honking - it's these little conversations that just make your day :-)

Interesting. A while ago you wanted to post funny photos of Chinese people and you really didn't like China, when you came back from Australia. How come the sudden turn of emotions? I am just curious, because your mood is so much brighter now. Don't misunderstand me, I'm happy for you. But just wonder what happened. I'm sure many of your readers do, too.

Yue -u r right about the pollution. I love the greasy food though!

Jens -yeah I had a super low after Austalia. A lot of things (that I didn't mention in this blog) happened and I really just wanted to leave. But I knew that I had to sit it out (highs and lows are quite normal), that's why I even wrote a blog post where I apologized for my shitty attitude.

As for what turned it around this time... I guess it was a mix of things, many too personal to blurt out here, but mainly, I decided to change my attitude. And that really turned everything around. I hope you are satisfied with that answer.

Anazei -I haven't been in Guangdong province but I have heard from a lot of people that it's a bit unsafe etc. Hard to choose what to believe before I see for myself.

The two times I was in China was for business purposes with the factories of Guangdong. I haven't seen the rest of China yet but I have a good impression of the rest of China. It's just Guangdong province that I have a personal grudge against from the certain dishonest business culture there.

When I read your post, I felt a little jealous! We have been living in China for 13 months now and have learnt a tiny bit of Mandarin but didn't make a concerted effort to learn and found it frustrating trying to use the language as everyone was just like 'meh don't understand what you're trying to say'! In a way I feel as though we haven't had as real experience as we could have, but at the same time, I totally agree with and love this post because I agree that (most) Chinese people are some of the loveliest and most accommodating people that you could meet and so many people have misconceptions about China and aren't willing to listen or learn what it's really like here. (I think that people who get sucked in by scams must also be a little naive, but you can get scammed anywhere in the world, not just China!)

wow, i can't believe i just spent 3 hours reading your blog when really i have a pretty big exam coming up in 2 days. you are pretty and your blog is so much fun to read. i can't wait for more.

-your newest fan from canada

This is such a lovely post. Thank you for that. =o)

Enjoyed your blog today. You seem to be serene and pleased with your life.

Wow, someone's in a great mood. Must be the arrival of spring (well, sort of). We all have good and bad China days. Enjoy the fruit!