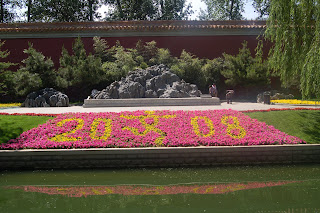 When we flew back to China (on Saturday, August 13) we bumped into some friends at Helsinki airport.

-Hey, how’s your holiday been?! When did you first get here? (The standard post-holiday conversation, you know).

-It’s been great, we got here six weeks ago!

-You’ve had a six weeks holiday?! Me and my bf flinched. We thought we had had an extremely long holiday –my bf had 3 weeks and I was off for a whole month.

-Yeah, well the last week was work, the guy said.

-Well, we actually wanted to have our holiday a bit earlier and be back by now, but because I had a Chinese delegation coming to Finland I had to be here and take care of them.

-We tried to get them to come here already in July but they refused, saying it was impossible. They really wanted to come in August.

-Yeah, and we pushed and pushed and then finally, they revealed why they just HAD to come in August. And not only in August. But on the 8th of August.

-Because they wanted to fly here on the 8th day of the 8th month: they arrived in Finland on August 8 (8/8 = very lucky day for many Chinese people as 8 is a lucky number in China).

-Oh yes! First we thought it was silly, then we remembered the Olympics in Beijing in 2008, and that it opened on August 8, 8.08pm. They take these things seriously in China. So we thought, how can we challenge superstition?

-Good point. So was it a successful visit?

Hey people, jump in and comment. I am waiting to be the 8th commentor on this post.

hello jonna! I read about your sleeping problems and could totally relate. I had trouble sleeping for almost 2 year but I finally found a solution ! I changed all the light bulbs in my house. we had lamps that made this cold white light and since we changed to warm yellowish light I sleep like a baby! I researched and found that these light bulbs actually affect a lot of peoples sleeping. maybe this is something you can try? I think its worth a shot!