How I lost my potential training buddy 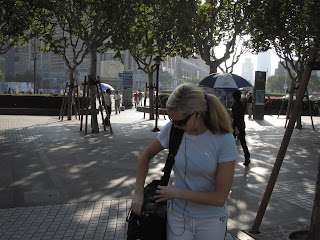 Last week at the gym I was in for a weight session. I’m not going to lie and say that I enjoy doing weights, but after several gibes from the men in my life (boyfriend, little brother, even dad at times, saying things like “no real runner neglects her upper body”) I decided to give my ’upper body muscles’ a go some eight months ago (however, so far I am not too impressed with the results. Instead of feeling ’fit’ I often look myself in the mirror and get this feeling I look bigger than I used to do… although that can just be the result of me spending too much time with my super skinny and tiny looking Chinese female friends).
Anyway, since weights are not my fave thing to do, I was utterly happy when I entered the gym and immediately bumped into my trainer friend Rocky (who's originally from Hunan) who had already finished work and who was also getting ready for a training session.

-Wanna train together? He asked.

-Sure!
Fancy bumping into him like that! He’s not only good company to a normally boring-1-hour-weight-session, but since he doesn’t speak any English its an excellent opportunity for me to rely on my Chinese.
We started off at the free weights section, lifting, chatting (OK, I did most of the chatting), encouraging each other and getting all red-faced and stuff (I had to try a little bit extra since I was working out with a trainer). I have to say that Rocky had a very interesting way of training. I have been taught (once again by the muscle men in my life) to start as heavy as possible and then go lighter in case I cannot finish my repetitions. But Rocky started fairly light and then went heavier (telling me I was making it 'too easy for myself' since I was not doing the same as him. I could tell by the look in his eyes that he didn’t believe me when I, in a high-pitched voice, tried to explain that ‘I started lifting this heavy one, and it was so heavy that now I can only lift this lighter weight’).
Still, all was good until Rocky suggested we’d do a stomach machine (stomach curl I think it is called). I normally don’t do this machine (regular sit-ups is my religion) but was happy to tag along to enjoy the company. Rocky started off and while he worked himself sweaty on the machine I rambled on and on about how much I wanted to go to Hunan and all the things I wanted to eat there.

I was so busy chatting that once Rocky was done and it was my turn to sit down I didn’t even stop but continued to talk while doing the stomach movement. 15 repetitions later I looked up, still talking, only to find Rocky looking at me with a wild expression on his face.

I hadn’t even noticed. In fact, I hadn’t even paid attention to what I was doing, nevertheless how much weight was on the machine?! I was too busy talking about spicy eggplant.

-Eh… ehum… yes. Although it was… hard! I offered, seeing that Rocky didn’t seem to be very much in love with the thought of me being as strong as him.

-You western girls are too strong!! I am too weak! I really have to get stronger. Why am I so skinny… oh my gosh… (我的天啊。。。)

-Eh, no really?! It’s… all the running you know?! Gives you great abs! You should try it sometime! I tried.

Although I had clearly lost him.

The final 3 repetitions he added some insane numbers of weight to the stomach curl, probably to prove to himself that he wasn’t ‘as weak as he though,’ although the pain mirrored in his face when he tried to work the machine was hard to watch (I, on the other side ended up removing some weight in an effort to make him feel better).

We finished off in the stretching room where Rocky kept going on and on about western women being ‘太厉害’ (tai lihai –too tough) and about him having to work out ‘more’ and ‘harder’ to 'get more fit.'

Oh dear. All over some silly machine that I don’t even normally use?! I’m guessing that in the future, I’ll be working out alone.

Posted by Jonna Wibelius at 7:38 AM

Oh... Men... Always trying to be better than us women hehehe.. Good job in the gym!!

That is pretty funny! Guys and their testosterone! Good job with the strong abs! That's something I tend to neglect. Though, swimming is a great way to tone your upper body, I've noticed. Plus, it's not too boring.

I've noticed that in Asian cultures, people usually train to be toned rather than strong.

Actually, when I was training in a Chinese gym, I got the impression that I was able to pull a lot more weight than the trainers even though I don't normally lift weights.

It might be all the protein from Burger King and Mcdonalds.

Ouch. Injured male pride alert! Too bad he took it so personally, it sounds like you were having fun.

Hey, you never know, perhaps Rocky will summon the manhood to realize he's bigger than some stupid competition and that your company and the inspiration it provides are infinitely more valuable than the preservation of his fragile ego.

Besides, 1) from your posts about him, Rocky always sounds like quite a nice person really, and 2) your own generous impulses must so clearly model the appropriate behavior in this kind of situation that I think Rocky can't HELP but be influenced by the example you set.

Anyway, good luck with the weights. Now you've inspired ME to go do some lifting -- no small feat, since it usually takes the interior equivalent of an Act of Congress (and I am so far from being a serious runner that I would make a more-than-usually-dilatory snail look like the Wendigo).

Sorry about possiably losing your training buddy, but I had to chuckle over the abs machine and that you could handle as much weight as him. I am working on losing some weight and I do strength training a couple times a week. Some info that I have picked up is that if you want to build muscle lift more weight with less reps, if you are just wanting to tone and strengthen your muscles less weight more reps. Other info that I have picked up is that you are right about starting out lifting heavier and then going lighter.

Simultaneous with the Gym, you may keep the amout of carbohidrat intake.

Boys and their pride! I guess you can't explain to him that females are typical stronger in the midsection and legs and men in the arms? Nah, that probably wouldn't make him feel better.

I guess I should add that I am not that strong...in case someone got this wrong. I possess no visible abs and stuff (I enjoy carbs too much to give them up).

Hopefully Rocky realizes that he enjoys your companionship and can get beyond the embarrassment.

We men really need to get beyond this sort of thing - it's the 21st century.

My weight workouts consist of carrying a 20 pound toddler around :) It's not the raw weight that's difficult - it's all the wriggling ...

Ahaha, so much for his pride... Ummm, maybe you just gave him a new reason to work harder out ;) Thanks to you he'll become the strongest man in your area lol

I used to be in the US Army. On our physical fitness test I would always get a very high score on the sit up portion, even though I never did much training for that specific area. I was told it was because I was a good runner.

I really should start running again...

Poor fella, I remember having a similar humbling experience at the hands of my "little" brother a year ago... Went for a run which turned into a race, since he is 2 years younger I have always beat him... no more! he absolutely killed me. I'd like to say I was graceful in defeat but I wasn't

I think Rocky deserves a round of applause for his tact.

He made it all out to be about him lacking muscle bulk and him being a weakling.

What he was really doing, was diverting attention from the real issue........you're butch.

(prepares for some quick witted Jonna Jibes in retaliation)

how many hours do you spend at the gym per week?

3M Ian -that happened to me too when I went running with my little brother. I am the one training for half marathons and stuff, but once we started running he disappeared after 10 minutes claiming I was 'too slow' for him (I almost killed myself trying to keep up with him, although I never told him that).

Adrian -lovely hearing from u like always. No one has ever told me I am like a man but I guess there's a first time for everything... :)

Shopgirl -During my recent study break I almost lived at the gym, going there 5 times/week for at least 2 hours/time... But I never do classes (reason why? I have absolutely, zero, coordination skills). Just running and weights. Now I don't have time to go as often but I try to go 4 times/week. It's funny though.. the more I go the more I want to go. If I go less one week, I don't feel like going the next... Sounds familiar?

I don't do any running or other forms of aerobic cardio, only weight training.

I have found in the past that the partners I work out with the longest are guys with very very similar capabilities/strength range in most areas. It doesn't matter if one guy can bench 20 lbs more and the other guy can lat pull a little more (weights on machines are easy to switch), but big differences in free weights take a lot of time.

I suspect it bothers him that he's being "beaten by a girl", because the dudes at my gym don't mind if I'm stronger than them (I work out with the guys in sales, who are built but small and super skinny, some of the real trainers are over six foot and can max out some machines)--it's acceptable in their stereotypes of laowai as physically strong.

What bothers them more is laowai with a good command of chinese. We play a game where they try to find obscure words and characters in my books and see if I know the readings; it makes them feel better, and I get to learn words I might have just glossed over in context.

Damnitt- even the little Chinese I know is wrong.

James - 厉害 has a looooot of different meanings depending on what context it is used in... 厉害 = terrible / formidable / serious / devastating / tough / capable / sharp / severe / fierce

so what you thought isn't wrong!