Relax AND talk at the same time? I'm not that talented yet 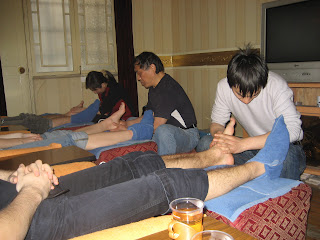 I got a message from my friend Willing (Indonesian girl that everyone thinks is Chinese) the other day asking me if I wanted to join her and her friend Nan Nan (Japanese-Brazilian) for an afternoon of a 3 hour spa treatment (1 hour oil massage, 1 hour facial and 1 hour foot massage for 120 kuai -about 12 euros). Sure I did!

"Just one thing Jonna, you cannot talk to the beauticians, OK?" popped up on my mobile screen after I'd gladly accepted the invite.

At the day of the indulgence, I met up with Willing and Nan Nan 15 minutes prior to our appointment.

-Jonna, now remember. No talking to the beauticians! I know you like to talk, Nan Nan said.

-Sure you can. Anything related to the treatment you can talk about. But no small talk about where you are from or what you are doing in China. Last time we were there (Nan Nan has a membership card at the spa, hence why the fee was so cheap for a 3-hour treatment) we did the mistake of answering their questions and as a result they talked to us, non-stop, throughout the whole treatment. Three hours of talking! THREE HOURS! At the end I actually asked them to be quiet as I wanted to relax but they just wouldn't shut up!

-You've got it. No talking.

We went into the spa and were showed into our room. Three pretty beauticians introduced themselves to us and told us about today's treatment. I nodded to everything they said, getting into my character of a quiet spa-goer.

Soon we were all lying on the massage benches, faces down, getting oil rubbed onto our backs.

-Mei nu, where are you from? the beautician said. I pretended I didn't hear her.
-Mei nu, how long have you been to China?
-Mei nu how often do you go to spas?
-Mei nu, mei nu, came again. Gosh, this was starting to feel a bit strange.

-Yes? I said and lifted my head.

-Oh, we are not talking to you but to your friend! Said the girl rubbing Willing's back. Whoops.

After 10 minutes I had heard enough to establish a few things:

1. Willing and Nan Nan were right. These girls were talking non-stop, no matter if we replied to their questions or not.

2. We were all referred to as 'mei nu' making it a bit confusing to understand who they were actually talking to.

3. My skin was super dry, all my birthmarks were really bad and oh, did I mention that all in all, my skin was BAD?!

30 minutes later we were told to turn around. And in came the big boss.

-HELLOOOOOOOO LAO WAISSSSSS!! she gushed (apparently she knew my 2 friends from their last visit). Willing and Nan Nan barely replied.

-Oh such a tall, while girl, where are you from? She sat down next to my bench and I simply, couldn't NOT answer her.

And that was it. Thirty minutes later the massage was over and the facial was about to begin and the lady was still talking. She had gone from telling me she wanted to visit France to that she really wanted to learn English and that she envied me that could speak three different languages... Even though my replies were minimal she just kept talking and talking.

-I probably shouldn't talk now seeing that I am getting a face mask, I said

-Oh, that doesn't matter! Said the lady. You can talk despite the mask.

-Of COURSE you should relax! But you can relax and talk at the same time, can't you?

Useless. It didn't matter that I went from answering her questions to just mumbling 'mmmm' or 'yeah that's right' at times, she still went on, and on, and on... keeping her face extremely close to mine, giving me compliments for my 'big eyes', 'bright skin' ('although I wouldn't want your big nose.. hahahah!' -well, it's not for sale!), and 'golden hair.'

Once the facial was finally over and we all got up to get dressed and go downstairs for our foot massage, I shot Willing and Nan Nan an apologetic look, saying 'I couldn't stop her!?' with my eyes.

-It's OK, Nan Nan said. I can tell you made an effort. Next time we'll all just bring earplugs.
Posted by Jonna Wibelius at 10:17 AM

We find that just throwing out a 听不懂 (ting bu dong) quickly silences them - they don't bother to talk if they think that you don't understand them. Well, they may still talk a little between themselves but they won't bother you with questions.

Of course I'm presuming that they were speaking to in Chinese and not English, so far we have only run into one masseuse that spoke some English...

Yeah that one is probably the best one, but I always give myself away as I wanna tell them what to focus on when giving me a massage (eg, I cannot stand them touching my legs so always tell them to focus on the back etc) and I've never had a beautician (yet?) that can speak English.

I hate any kind of talk or NOISE during a massage or facial. How can you relax and clear your mind???

Just found your blog on Blog of Note.

I'm jealous that you can always seem to get good massages. Last time I got one, my back was aching all night and next day.

Haha. That seemed to defeat the entire purpose of the three hour massage. But you guys are brave, planning another trip there?

What a talkative beautician you met! :-) but I think that by talking with u will help him enjoying massaging u, maybe she will be bored if being silent all the time, just forgive her , Jonna! hehehe.... I found this interesting blog from Blog of Note too! Keep blogging, girl! :-)

I also found your blog from Blog of Note. Your trip to the spa could easily been a scene from a sit com.

No one can stop them unless you only do 1 hour treatment .haha

well being in dat spa doesnt seem so relaxing after all....with the talks and stuff....u will just end up talking instead of resting and relaxing....

i am always v. annoyed by talkative beauticians! the worst part comes when they start telling u how bored/tiring their jobs are! being such a "considering" person, i almost feel guilty of the sweat and tears they spill for massaging me...indeed v. relaxing...NOT!
p.s. glad to see there's a substantial increase in the number of readers who check out your blog now...dun forget us the long-time loyal readers ;P

hope you had a nice massage,, bring the earplugs next time hehe

maybe they were just trying to be friendly though.

couldn't help but notice this, but i believe pinyin for 美女 is "mei nv". hope this helps.

how can u talk while having facial mask?!

Tripfriend -Yeah, Chinese massages can hurt quite a lot. Ask for a oil massage or a Japanese massage next time u go.. those are a bit softer.

TFHK -f course I won't forget my loyal readers. You are gold to me and w out you guys this blog would b boring... :)

A chinese massage is that the ones when they step on your back? I wouldn't know I'm a guy and most guys don't get too into that kind of stuff. I mean we would love to get a back message but you tell your guy friends that and all of a sudden your sexuality is up for debate.

Matt -you can choose if u want them to step on your back or not... it's not crucial... (and I have never tried that kind.. sounds, ehum, a bit.. rough!). I don't think u have to b a girl to get a massage.. at least not here in China. Loads of guys getting massages, western as Asians.. I mean, the best thing I can think of after a work out is to get a massage.. especially if I've gone for a long run and the whole body is soar. Really, don't let your 'manliness' be in the way of getting a massage -it's too good to miss out on! :)

Ha ha, that's so strange! It sounds like they prefer listening to themselves talk more than having a conversation with you. Don't worry, you did a great job:)

What a lesson in culture (or no?) -- I've never experienced such a thing in any spa situation, but then again, it wasn't in China!

I love the full swedish massage...Being a foreigner in this country, people just assumed I dont speak English- so they just smile at me..and do the sign language..LOL-which I much preferred...:-)

I hear you. Massages arent so popular in Western countries, but in Asia they are everywhere, and I, for one, have become addicted. In fact, I shall be heading out to one as soon as I send this comment :)

I've never done a 3 hour session before though.

Have you tried Thai massage before? (If you havent, it's really different to the "usual" and it's fun!)

Ok, stressed for work and gotta get my fix now.

If I can get 3 hours massage for 12 dollars, they can talk all they want!

Talk might make their lives easier. Giving massage is not a easy job.

Did not sound relaxing at all to me. I would not go back anymore ... I was annoyed just reading with all the talking!!!

You made me laugh out loud! I hope next time is much, um, quieter (if there will be next time, thats it).

Well at least they talked to you. Where I live all of our nail salons are run by the Vietnamese community here. They are very talented, but I haven't found one yet that will say a word while working. I feel kind of awkward sitting there for so long in silence. I'm not really a chatter bug, but SOME conversation would make the time pass a little quicker I think. Although I think I would go a little crazy if they talked as much as your spa ladies!

Wow, that must have been really annoying. I wen to several foot massages when I was in Taiwan, but since I don't speak Chinese, they didn't talk to me! :D