Upcoming spur of the moment trip 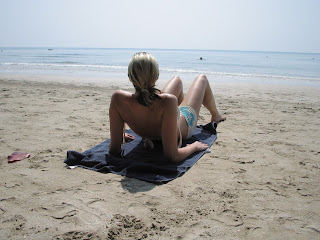 Hello, beach life! (picture from a trip to Thailand in 2007... I don't have any photos of Hainan, and I don't wanna steal someone else's  from the net, so I figured this one has to do for now... Just to set the mood!)

I have some rather fantastic news!

My classmate, travel partner and dear friend Willing (from Indonesia) has decided to leave China (booohhhh!) for at least 6 months, and she asked me if I was interested in doing a ‘final trip together’ before she went home.

Of course I was. Although my wallet wasn’t.

So I told her I’d love to go for a long wknd trip, but that my maximum possible ticket spending amount would be 1000 rmb. Willing promised to do some research, and 2 days later I got a sms:

-How about Hainan Island? I’ve found a 900 rmb return flight ticket, including taxes.

I pondered for about 20 seconds before I wrote back:

So, as a result of this, me and Willing are going to Hainan island in the beginning of June! I am so excited! To get the cheap tickets we have to fly there late at night and leave early in the morning, but hostels/hotels are quite cheap there at the moment (we’ve only been looking for a little bit, but you can find something quite decent for 100 rmb/person/night). I am personally not too fussed about the hotel. Sure, it would be nice to stay at some fancy resort, but a holiday for me is all about being outside and experience things, so in the end, the hotel doesn’t matter that much. As long as it has a bed, an air con and a shower (and no cockroaches or bugs –or OK, not loads of them anyways) I am happy!

All in all we’ll have 4 days to lie on the beach and explore the island. I’ve heard that Hainan isn’t the most exciting place on earth (people have told me it’s ‘just a beach resort’), but it actually doesn’t matter. Sometimes it’s nice just to relax and take it easy. I’ll be working all summer anyways, so I guess this can be seen as my mini-holiday before going home! 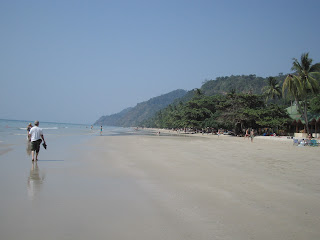 Too many tourists in Hainan unfortunately and not much to see. But if you are only going for a long weekend, then you shouldn't get bored as there are a few things Hainan is known for.

One thing I wouldn't recommend doing is scuber diving! The water wasn't very clear to see much when I did it...

Even if it's not an "exciting" place, sometimes it's nice to just get away.

Enjoy the time with your friend.

Remember to stick to legitimate hotels and DO NOT buy from locals. They will rip you off BIG TIME!

Seriously, I have heard many horror stories about travelling to Hainan Island. So be alert while you enjoy the beautiful beach and sunshine!

胡崧 - Seems like locals always try to rip off tourists. Doesn't matter where in the world you go. Still, always good advice to be watchful of it! ^_^

Jonna, I think I'll be heading to the Philippines around the beginning of June, both to visit my wife's family and to renew my passport stamp while I wait for my permanent residency application in Singapore to finish its approval process. (Hoping it's approved anyways).

There won't be a whole lot to do there either, but, like Casual said, sometimes it's nice to just get away from everything.

I suppose a little yard work and chatting with her brothers and dad would do me good.

I'm going to Hainan in July! Please make some photos and look for good places to go and try out :) Looking forward to your Hainan blog entry ^^

Sorry to bother you with this question.

I'm in Guangzhou and blogspot can't be accessed. Mine also got the same problem. I believe this is because of the government blocked the site.

Are you having the same problem? How do you overcome this?

p/s: I browse yours using other channel..

hope you have a relaxing trip!

Hi Jonna! Your mini-vacation with your friend sounds like a great way for you to relax and enjoy yourself. If you are in good company, you can enjoy almost any destination... although I have to admit the beach hold a great attraction. I hope you get some good photos to share with us. Have fun!!!! :D

Don't mind the tourists, I'll take Hainan every time... :)
I don't think I'll be bored if I spend just 4 days there. Planning to fill my bags with good books, eat a lot of fruits, swim and just relax.

胡崧 -I'll def buy fruits from locals... I am so used to being ripped off wherever I go in China.. I'm sure Hainan won't be that much different. It's not a shopping trip anyways..

Brad F -yeah it sure is! Enjoy your trip! I'll surely enjoy mine!

tassomat0r -for sure. Expect a lot of photos once I get back!

Sahalfikri -just like u solved it -by using another server. No magic way around this problem. And no, I don't know why it is blocked, if it's blocked everywhere in china or when it will end.. sorry... :/

miss cheif & carl -thanks u guys! I seriously cannot wait! A lot of travel stories with photos will be published once I'm back in SZ. Still some weeks before I go though.

Sounds exciting! I can't wait to see your pictures!

Keep away from bars with Russians

cheap fruit and seafood, very cheap seafood. despite what you think of hotels, hotels are very important in Hainan, cuz good hotels also take up all the good beaches, anyway, Hainan is a huge island, where in Hainan are u going`? sanya?

As long as you're with nature, you can surely relax. :)