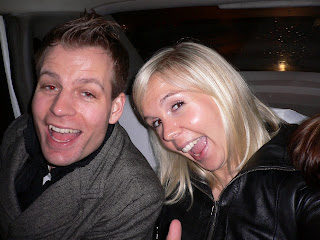 It's about as crazy as these 2 muppets look on this shot...

There’s apparently a competition for foreigners studying Chinese in the beginning of June in Nanjing. Participants need to take a written test, answer some questions about Chinese culture, and do some sort of performance (singing, dancing, opera, you name it!). The best ones qualifies to the final that will take place later this year in Beijing.

I am not kidding now, but pretty much every single student in my class have been asked to participate. Basically everyone, except for me. Aooooch.

Now, don’t get me wrong, I don’t think my Mandarin is fantastic in any way… but when they asked some people whose ‘kouyu’ (spoken Chinese) is quite poor, and I still didn’t get asked, I felt kind of low….

….until I got a phone call. From Suzhou’s local TV station. With a request to have me on one of their talk show!

So guess who’s making her SECOND (da ta daaaaaa!) TV appearance this year?! Yup, me. Apparently I am going to be taught some local dialect on the TV show, because the idea of this show is to compare local Suzhou-hua to the standard Mandarin (pu tong hua). I would lie if I said that I wasn't nervous, because everything will be entirely in Chinese. But when I talked to one of their journalists on the phone and asked her if she really thought my Chinese level was good enough, she said:

-Well, we just had a whole phone conversation in Chinese so yes. Your level is good enough!

So next week, while some people are going to Nanjing to compete in some competition (pfffft!), I am going to Suzhou’s TV station to learn local dialect, hagga hagga! (hagga= haode = OK in Suzhou-hua -that's about how much I know of the local dialect!) Stay tuned!

(ehhhh, although… who am I kidding? This brave face I am putting on is just a façade. I am actually scared to death).
Posted by Jonna Wibelius at 6:36 AM

Wow. There are a lot of opportunities in China then right? :D

Good luck! How exciting for you!!

I can't wait to hear all about it! (And have a link to the video?)

Zofy & emmy -thanks guys! I think I need all the luck I can get!!! I'm so nervous that my mind is gonna go blank during the shooting, and that I end up not remembering a single word of Chinese... :/ Well, let's hope that doesn't happen.

Isa -hm....A lot of opportunities to make a food out of yourself as a laowai on local television? Sure! But yeah, I would say that there are def more opportunities here in China than in my native Swe.

Sink -If the video goes online I will tell u guys, although I doubt it will? Anyways, I'll bring my camera to the shoot and ask someone to snap some photos of me. Hopefully my face won't be tomato-red all the time... ehum.

you'd better start working harder! so that you can become a REAL celebrity in China!

I am so looking forward to see the famous Jonna

If there will be one, will you post a youtube link to us? ;)
Good luck, that's fantastic!

Chance on your hand~~~ so take it and enjoy that~~

Congrats! That's sooooo exciting! You should definitely see if you can get a video of it and post it here -- I'd love to see it!

And don't feel bad about the competition. It doesn't really mean anything about your Chinese, and it would probably be a huge pain to prepare for, anyway. What you're doing is WAY cooler!

Best of luck. I'm sure it will be an unforgettable experience!

Thanks again you guys!!!

Flyingfish -I still would have liked it if they at least would have asked me to participate in that competition... but but... maybe next year.

Incognito -I am not sure that I would like to be a celeberty... I'm kind of low-key. But the TV show will be fun. Although I am a bit concerned that I will look all red-faced and sweaty (since I will be very nervous!) on the TV screen.. oh well.


Little tiger -I believe the Nanjing qualification competition is part of that competition u competed in once and told me about?? Obviously I'm not quite there yet...

Is the competition titled "在华留学生汉语大赛"? if so, I happened to watch the show last year. It is a very tough contest, some questions are even difficult for Chinese native speakers. The show goes on for a whole week, each night saw some contestants get eliminated (how sadly). The show was overall quite enjoyable and funny. Last year's winner is a postgraduate student from Cameroon who has been studying in China for 8 years. The runner-up is an Iran boy who has a Chinese girl friend. To win the competition, one shall not only have good command of Chinese language, but also be very keen on Chinese culture. It takes a lot of hard work to win.