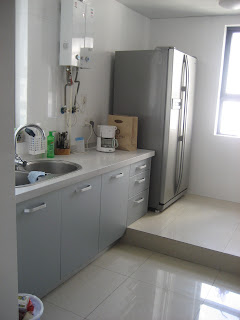 Life in China is full of surprises. Like when I got home from the gym on Wed night, sweaty like a wet sock and very ready to hit the shower. And there I was, standing in the shower, holding my hand out and waiting for the ice-cold water to turn hot… only though, it didn’t.

I went to the kitchen to check if we still had gas. Nope. Must be out of money on that gas card then I thought, but wrong again. The card still had money left. But for some unknown reason, we neither had gas nor hot water. And I desperately needed that shower. Great.

After a slightly improvised shower in our bathtub aka the sink (our second bathroom is equipped with a pretty, but useless, bathtub that has a separate water heater. “Awesome!” we thought when we moved in, until that day when we tried it. There I was sitting in the half-full tub when the hot water suddenly ran out. Turns out, the external heater doesn’t have enough hot water capacity to fill up even half a bath tub!), I didn’t feel clean but at least a little bit fresher, and the next day we reported our problem to our landlords. Seeing that I don’t really love our landlords (especially not the woman, she always complains about how dirty our flat is, about us drying our clothes inside and not on the humid, dirty balcony, about us not wanting to open our windows to let some "fresh air in" and so on) I let my boyfriend report it to someone at work who passed on the message. We were told that someone would come to fix it at 8pm that night.

At 7pm (…) there was a knock at the door. We opened and were surprised to see a young Chinese couple standing outside the door. “Oh, might be a translator or something, or some new people from the real estate agency?” I thought. It has happened before that we have called for our landlords and a young translator has showed up with a dictionary but no toolbox, only to leave 5 minutes later when she realizes that we can communicate in Chinese. Anyways, I was quite happy not to see our landlord lady so I let the young couple in.

The man was rather hysterical. Sweat was pouring from his forehead and he seemed stressed and in a rush, pretty much running into our kitchen and throwing himself at the gas meter. The young girl definitely wasn’t a translator, but seemed like a nice “tag along” until she said:

-We live just across the road so we were looking into your flat and when we saw you turn on the lights we decided to come over.

(Uhhhhh!!! "Spies" on the other side of the road!? Note to self: never walk around the flat wearing only underwear again.)

The hysterical man seemed clueless to our problem, he thought it was the card that was out of money (even though we had already told him it wasn’t, but of course they cannot trust us, “stupid laowais”) and when he realized we were right he just sat there at the floor, looking at the gas meter. He then started calling people. It was around 7.30 pm but apparently some repair place still had people working and they promised to send someone over immediately. Got to love that about China. It’s never too late to call for assistance.

While we were waiting the man suddenly discovered a box attached to the gas meter that had 4 batteries. Maybe it was those that needed to be changed? We didn’t have any batteries at home so he rushed out to buy some. In the meantime, me and the young girl sat down and had a chat.

-So you’re new at the real estate agency? I asked her.

-Oh, no. I am the new house owner. I took over this flat some months ago.

-Yeah, your old landlord wanted to find a flat in another area so I bought this one. So yes, I am your new landlord, you can call me “mei mei” (not as in little sister, but as in “beautiful”).

-Just this summer. Maybe your boyfriend remembers, I was here one night and looked at the flat.

-Oh yeah that’s right, my boyfriend said. You came in for like 5 minutes around 8pm one night and looked around.

-Yeah that’s right! The girl said. Then I bought the flat.

-So if you have any problems you can contact me!

Me and my boyfriend just looked at each other. Here was a young girl who’d bought the flat where we are living, without even having people doing a mould check? We know for a fact that this flat might look quite nice but that it has a lot of problems (like moist and leakages) that should be solved. How can someone just buy a flat after having looked at it for 5 minutes?

Unfortunately we didn’t have time to ask. There was a knock at the door and in came the hysterical man equipped with batteries, plus a new repair guy (that was fast!), PLUS one of the gate guards working at our complex?! We were all quite surprised to see him.

-Hello hello! He said, carrying a flashlight and looking important.

-Eh, hello… ehh… come in? We replied. Got to love the fact that people just turn up at your door when it’s repair time.

Turns out it was the 4 batteries that needed to be changed. The repair guy and the flashlight guard had come in vain, but they seemed happy still.

-Oh, so you guys have not had any hot water for a whole day? The hysterical guy said. Yuuuuuk, so you haven’t been able to shower?

-Well we used the second bathroom with the external heater, I said. It’s not great but it worked for cleaning up.

-Oh, the second bathroom has an external heater? The boy and the girl said. Wow, we didn’t know that.

-Well that’s great then! OK, if you have any other problems just call us!

You have to LOVE this. Here they are, our new owners. Living across the road so that they can conveniently look into our flat. However, they don’t even know that one of our bathroom has an external water heater? Well, like I said, life in China is full of surprises, and those two are definitely in for some.
Posted by Jonna Wibelius at 9:28 AM

Is a gas card what I think it is? Something like a prepaid phone card, but for your gas? I haven't heard of that before.

Yeah, 5 minutes to look at a place before buying it seems a bit ... er, insufficient. Always get an inspection!

Kosmo -yup, that's right. It's a card that re-charges your gas... quite.. ehum weird I guess but it works fine!

Firstly, commiserations on having no hot water. We take utilities for granted, but when they fail, life goes from 21st century to 15th century pretty damn fast :)

Secondly, congratualtions on having new landlords.

Thirdly- how can the previous owner not tell you they sold? Such a lack of courtesy.

Fourthly- I get what you mean about needing to look at a place thoroughly, but I was thinking more about where a young lady would get the money to buy a flat.

Also, I'm still confused about home ownership in China. From what I read, it's pretty much whoever says they own the property, owns the property, as there's no proper register of ownership. Is this true Jonna?

Jonna...you are a great story teller! i really enjoy reading your daily adventures in China.

When my hot water goes, i take a cold shower hehehehe. Nothing wakes you up more. But china is humid so a cold freezing shower wouldn't be as bad.

That's interesting. The last place I lived in Singapore, towards the end of the contract, we found out the owners lived right across the street and could see into the flat, and even hear what was going on sometimes. They were also Chinese, well ethnically at least.

hahaha~~ i am trying to shower in cold water, even in the coldest day unless i get cold... cold water make people more stronger!

I love your observations & comments about who can see in the apartment & who can't. The new owner thing though is a hoot. Are they nicer than the old ones? would the old one have been so prompt in taking care of your needs? Is the one called "beauitful" an advice giver - like opening your windows etc.? Maybe like your new school these new landlords might be better in the service line? What do you think?

Adrian -I know very little bout real estate in China... so can't really answer your questions. Although one thing is for sure, it is nice to have new landlords! Our new ones seems much better than the old ones.

Martin -ah, that's great to hear! thanks for your nice comment!

Joanna -yeah you r right, a cold shower can be refreshing.. but not when u need to wash your hair, then it's just... freezing!

Brad -not going to lie here, I'm freaked out about the "we live across the street so we can see into your flat" thing... Wonder what that's all about?

Mantse -yeah, I wish so too!

Pete -they seem much nice than our old ones. Sure, the man was a bit hysterical but overall pretty OK. I'm happy about this change so far!

@Mantse: Actually, I heard that showering in warm or hot water has better health benefits:

Hot Baths (100-113 F) - shocks the system; causes increased circulation especially when followed by bundling in blankets causes profuse sweating to detoxify the body wastes. Caution: Hot baths can dehydrate the body and can be exhausting. It can also lower blood pressure and result in fainting.

Not too sure how reliable that source is.

It's probably mostly a cultural difference thing, but does anyone know of a reliable source for info about that?

@Jonna: They probably don't trust sneaky laowais and think you're up to no good. Ha ha ha! ^_^

Is your boyfriend Chinese? :)

Brad -hm... interesting. I've always heard that cold water is better for the body than hot water. Not sure where I've heard it from, but I remember my grandpa told me when I was little that showering in cold water was better than showering in hot water.. however, who knows if that was just an idea that came when people needed to reduce the hot water consumption?

Jewels -bit creepy, but could have been worse. So far I haven't seen them spying on us using binoculars ;)