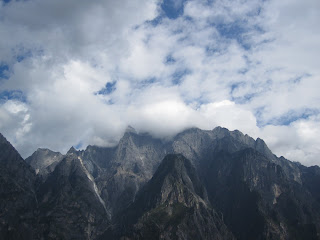 Better late than never, right? I thought I’d finish writing about the Tiger Leaping Gorge trek today, only 1 week after I wrote about the day one trek (ehum).

First of all I have to recommend anyone doing the trek to stay at the Halfway House. It was great: fair prices, insanely good food (or is it only so that on a mountain everything tastes rather amazing?) and friendly owners that took their time to chat with us. Mom and I stayed in an fairly big room (that had a private bathroom) that was clean and OK, and 120 rmb/night. I think the dorm was something like 20 rmb/night. There were also cheaper rooms.

We were up early the next morning and had a wonderful breakfast at the roof terrace (muesli with yoghurt and fruit, Yunnan coffee and some Naxi sandwiches, note to others: no need to order this much, the portions here are BIG!) before heading out.

Our Naxi friend Xiao Hua had already warned us that walking down the mountain could be a bit tricky, and I was personally a bit worried about this. I have weak ankles and I’m quite clumsy in general, so I prefer walking upwards (where you have everything under control) to walking downwards (where nothing is in control). We decided to walk together with a bunch of guys that we had gotten to know the night before at the roof terrace (a great mix of ABCs and Chinese and a lovely British couple on their around-the-world-trip –respect to them, the guy was in sandals!).

Everything started off well and the road was flat and pleasant until we suddenly saw a…. waterfall. That’s when it all came together for me. The day before Xiao Hua had told me that there were several “pubu” (瀑布) but for some reason I hadn’t clicked and realized that it was waterfalls he was talking about (note to self: never just pretend that you understand when you don’t). Now I saw a huge waterfall in front of me and I saw some people crossing it, having obvious difficulties as the waterfall was on one side, and a steep edge on the other side.

I immediately wanted to turn around. I could already see myself slipping on those wet, slippery stones and being swept away over the edge, breaking more than my foot when I landed some 20 meters down.

-Sorry I can’t do it, I told Jason, a guy I had been talking to.

-Sure you can, here, give me you water bottle and you’ll be fine.

I feel kind of bad because I held up our group for about 15 minutes at this spot, simply because I was too scared to cross. In the end, everybody had crossed except for me and Jason who claimed he would “catch me if I fell” and therefore walk behind me. Eventually I did it, but without any of that grace that the others had done it with. I simply walked straight into the water, ignoring the wet, slippery stones that others had been stepping in. I still had to use some stones (sooooo slippery!) but I magically managed to stay on my feet and didn’t even fall once (soooo proud of myself!), and got a big applaud from the others once I was on the other side.
-I’ll never do that again! I said I said with a grin when I sat, wet as a cat (In order to avoid the edge I had walked so close to the actual waterfall that I was soaked) on the “safe side.”
-Oh, don’t say that! the others said. And sure thing. Only some 20 minutes later I had to eat my words when a new waterfall appeared.

In total we crossed three waterfalls, but the other two were quite small compared to the first one so it went well. No one fell, only thing that happened was that I got a bit wet and had to walk the rest of the trek in soaking wet shoes. But that’s no biggy.

Going downwards proved to be steep and a bit hard on the knees, but overall it was OK. I think I was so relieved about having crossed that waterfall that I actually didn’t really care about anything else. I made my way down in one piece, and we did it quite fast. I think it only took something like 1.5-2 hours?

Down at Tina’s Guest house (which is some kind of meeting point) the others went on to see the actual “Tiger Leaping stone” where as me, mom and some other guys caught a car back to the entrance, and then a bus back to Lijiang. Here we also found out that one of the other hikers were Swedish. Yikes. So much for talking your own language thinking no one can understand you. Oh well.

Overall I have to say it was a great hike. I would recommend it to anyone going to Yunnan. For me it was the best part of the whole trip (except for when mom got dizzy in the beginning of the trek): Stunning nature, friendly, helpful people, and good food + a hot shower awaiting you at the end. You don’t need much more to be happy. 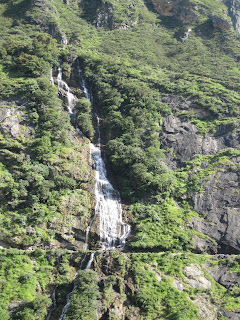 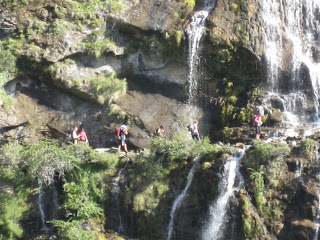 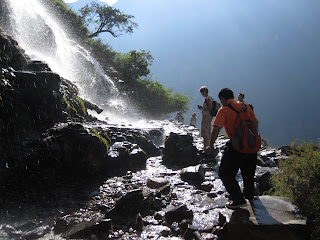 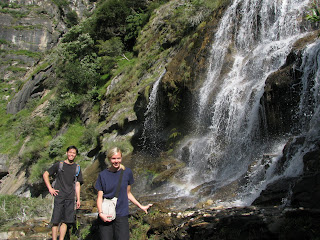 Proof, proof! I did it! (Photo by Jason/Justin) 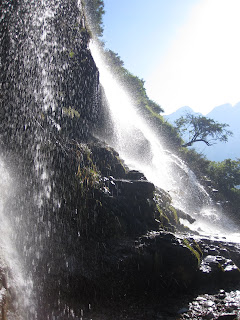 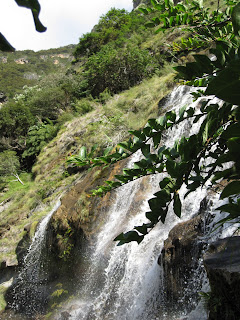 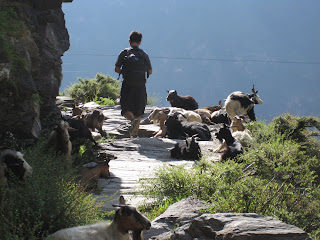 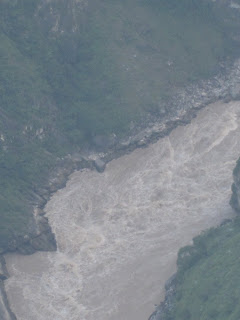 Previous posts about the TLG trek:
Day one trek
Video of me climbing the 28 bends
Posted by Jonna Wibelius at 8:43 AM

Yes, it's better late than never, because in the meantime I was so anxious to hear more about Tiger Leaping Gorge that I went a-googling on the net. Wouldn't you know? An italian that lives not far from me did a long tour (quite 7 weeks!) all on his own by mainly public transport! Seriously, China is awesome in its natural wonders!! (and let's not forget the food)

Thanks Jonna for taking us there (although I wouldn't have minded if this was a super long post). So when's the next hike?

Rowena -great to hear that there's someone else but me who is excited about the TLG... hehe. you should come over here and do the trek yourself, I bet u would love it. It is quite easy to move around China simply by using public transport... and it's cheap too! But might be hard if you don't speak any chinese at all. But normally there are someone who can help you/ who speaks a little bit of English.

Next trek... ehh.. hehe. I don't know, I am scared of heights remember? Having said that though I'd love to visit the Yellow Mountain (huang shan). Maybe with a friend in the beginning of November? :)
I'll keep u posted!