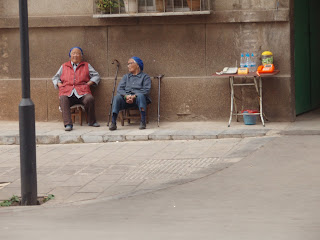 Back in Suzhou after one fabulous week in Yunnan. Wow. So many new experiences. So much to take in!

To start off with I guess I should say that since my mom is still here so I’m quite busy, in case I don’t make it to the computer every day. Another thing, I tried to blog from Yunnan but wasn’t able to access my blog without a proxy (I cannot believe it is still blocked in China! Arrrghhh!), and trying to find a proper proxy from an internet café in Dali didn’t really feel like my thing. Besides, the computer I was using kept shutting itself down.

But, back to Yunnan. What did we do there then? Well, to start off from the beginning: On Monday, we got up super early, took a car to Shanghai, and then flew into Kunming. From there we managed to get to the wrong bus station, namely the west station. We had been told that buses to Dali would leave quite often, so imagine our surprise when we asked a woman at the ticket office when the next bus to Dali was leaving, and she said: “In 2.5 hours.”

Since we were carrying some seriously heavy bags (I know I know, bagpacking is all about travelling light, but I simply do not possess that ability, and neither does my mom, so it wasn’t only me whining about a sore back 5 minutes into carrying my rucksack around) and had already had a late brunch (a detour from the airport before we ventured to the wrong bus station) we had nothing to do but to… wait. And wait. And wait.

2.5 painfully long hours later a man that probably qualifies as The Rudest Man I’ve Met in China came and yelled at us to get into a small, smelly, terribly unsafe-looking version of a minibus. We obliged, and he drove off, in the usual road-rage-race speed. He refused to answer any of my questions (such as: “will you please slow down?!” or “Hey, where are we going?” and “Why aren’t there any other passengers?”) and when he suddenly steered the car into a small little building area we where a line of men stood watching the car pull in, we were getting ready to get robbed.

Fortunately, the men just glared at us, and the Angry Man got out and said something to me I didn’t understand. When I ran after him and asked he started yelling at me that I was stupid who didn’t understand Chinese (cheers) and then he went to one of the men and started talking to him, without taking his eyes of us. I went back to the minibus where we felt feeling everything but comfortable and probably not being many meters closer to Dali than we had been some 20 minutes ago. I was seeing some crazy scenarios in my head about what was going to happen next when a large bus suddenly pulled up (from nowhere) and a very thin Chinese girl waved for us to hurry inside.

We threw our bags in the truck and hurried inside, all while Angry Man kept watching us. Once seated the tiny thin girl handed us a bottle of water and asked if we were going to Dali. Finally! That was the first good moment of that day.

However, whoever told me it was a mere 3 hour bus ride to Dali now “with the new highway” is to think again. It took us 5 hours with that bus, although I should mention that we stopped at one of the Dirtiest Places Ever where we were told we could enjoy 30 minutes of rest/peeing/eating.

Mom had her first encounter with a toilet stall without a door that you can close behind you, but once she had overcome her fear we headed to the restaurant and ordered, ate, and paid within a time frame of 10 minutes. I’m personally pretty impressed. Although I guess the fact that I was so hungry I was about to start nibbling on my water bottle had something to do with it.

We arrived in Dali quite late, sometime around 10 pm. The bus dropped us off in the new town where a bunch of taxi drivers competed about getting us into their cars and drive us to the old town. We picked a guy and another two bagpackers magically showed up, asking us if they could go with us as they didn’t speak one iota of Chinese. Sure they could.

During the ride mom and one of the bagpackers (a young girl) bonded over the trauma of seeing a toilet with no door that you can close, meanwhile I chatted away with the taxi driver. He proved to be the happy, chatty kind, not only driving us to the old town for a cheap price, but also telling us everything we needed to know about Dali (weather forecast, local specialities, sightseeing must-do and must-not-do) and assuring us that he’d help us to find a good hotel.

Me and mom were knackered and ended up settling for the first place he took us to: a rather fancy hotel that was a whopping 260 yuan/night (I say whopping because it was compared to what we paid for our rooms during the rest of our stay). It looked clean and had big beds that we immediately fell into. The other two travellers continued on with the happy taxi driver who kept his promise and took them to a cheap, but nice hotel. We know this because we bumped into them the next day, and they told us the driver had even insisted on everything from carrying their bags to doing the haggling for them, since he was so keen that they would end up happy. Quite a champ if you ask me.

So, that’s the story of the (fairly boring) day one where nothing really happened but we still made our way to Dali. Tomorrow I’ll write about Dali, then about Lijiang, and then eventually about the best adventure of the whole trip: the Tiger Leaping Gorge.
Posted by Jonna Wibelius at 9:27 PM

Great post, Jonna! You and your mom are very brave, having experienced the "are we going to be robbed" encounter. I'm glad everything worked out well. You did a great job of telling the story of your first day. I'm looking foward to hearing the rest of the adventures from your week!

It sounds like you had quite an adventure. The description of the bus terminals and buses reminds me of some of my adventures in the Philippines.

I suppose that guy was probably angry that he was ferrying you around. Maybe he had a chip on his shoulder about caucasians. Who knows? I'm just glad to hear you made the trip without a bad incident.

Your story about the nice cab driver reminded me of the people in Phuket. I still have to post a blog entry of my own about that. They were so friendly there!

Ugh, can't believe that rude guy. I don't know how people like that sleep at night.
God help his wife is all I say!

I look forward to the next installment of your adventure.
Also eagerly anticipating reading about the tiger leaping gorge (with popcorn at the ready) :]

I wonder what that angry man was upset about... Sounds like quite an adventure. I've never been in a no-door potty, but I've heard about them... not in a hurry to try them!

Carl -Thanks! Yeah, we were also happy when we realized everything was working out... The rest of the week was def more fun than the first day so there's more to come!

Brad -yeah, although the big adventure didn't really start until we went to the Tiger Leaping Gorge.... stay tuned :)

As for the angry guy, I have no idea why he was acting like that but I can think of some reasons:
1. Bad day.
2. Monday bad day.
3. Sick of driving "stupid" laowais around
4. Just generally grumpy.

Oh well, in the end he still brought us to the right place!

Little Tiger -yeah the Gorge adventure is worth some popcorn. ;) Just to tell u this much: I am terrified of heights. So it became a bit of a "big deal" for me... hihi. As for grumpy man, well let's hope he's not like that when around his loved ones.

Kanmuri -oh, I have to post some photos of those door-less loos then! :)

Jonna, you should have gone to Nanyao Bus Station (南窑汽车站) to take a bus to Dali! The bus leaves for Dali every 1 hour.

That angry man is weird!

That sounds like quite a trip out there--I give you a lot of credit for taking that on.

Hang -yup. I realized we went to the wrong place. Oh well. We still made it to Dali. Better late than never :)

Pilgrimchick -it was really good! Thanks! Strongly recommend it to anyone.