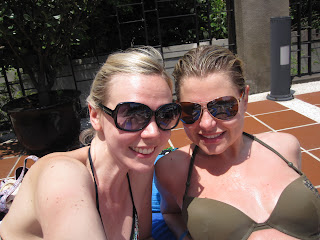 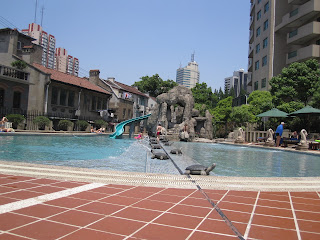 This is China at its best: 25 degrees, blue skies and Jonna back to living in Shanghai -with pool access! It's no secret that Shanghai gets humid and hot during summer, but the worse it yet to come. Until then, I'm enjoying some of the best weather I've had in the city (I mean, the skies are blue, it doesn't happen that often?! And it's not that humid yet even though we're about to enter June) at my friend Maria's housing complex's pool (Shanghai must have: friends with pool access unless you have it yourself).  And yes, of course I've tried the slide, several times actually. It's not as much fun as it looks. It's even better!
I think this wknd that passed was one of the best ones ever. Also, having two days off in a row felt like being on a real holiday. Tomorrow it's back to reality though, and this week I'll try to get back to my normal exercise routine. I'll kick off the week with a 6km treadmill session. Let's hope my gym is generous enough to keep the air-con on.
Posted by Jonna Wibelius at 9:32 PM

There werent anybody blowdrying their body with a hair dyer in the shower room were there?

Did you get to watch eurovision on TV there?

You are making me so jealous! It sounds like you really needed that break. I'm glad you had it.

By the way, this is my last day in China. Tomorrow I'm returning to the States.

I published one last blog post a couple of days ago. From now on, "Wind, Caught in a Net" is officially an archive.

But I'll keep reading "SHE in China" as long as you keep posting!

Alex -haha, no, I would say 99,9% of the pool crowd were laowais! No blowdries anywhere I looked. But this morning at the gym... oh my.

Nah, I'm not a Eurovision fan but I read a bit about it in the papers.

Flyingfish -U r LEAVING?! Why? You ARE China?! Are u planning to come back. I will have to read up on your blog to find out more I sps. Anyway, I hope that u are feeling happy about going back to the US and that u will come back to China often!

No air conditioning in the gym, in that kind of weather? Wow! You're a trooper for going back.

pilgrimchick -the air-con was actually on, so it was an enjoyable run! Also, the city is yet to become stinking hot, so I was fine! Going back today for more... :)

胡崧 -the treadmill is actually nice to your knees. It's running on concrete that damages them. The best one is to run in the forrest... ahhhh... summer in Scando here I come!

What is the name of this compound?