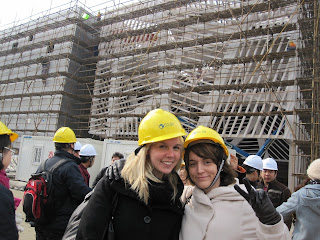 3 months ago I never thought they would finish building it on time?!

Who's up before sunrise today?! In fact, I got up before my significant other got home from his night out?! Life's unfair! Then again, while he'll be sound asleep I will be able to enjoy he opening of the world expo. Pretty cool! After having read various horror stories of people having to line up for 2 hours in order to buy a hamburger, my handbag's full of power bars! The worse thing I know is to be hungry! Now let's hope that they manage to pass through one of the (possibly) 872348 security checks I will have to go through...

Shanghai's really been gearing up for the Expo. This last week there has been security checks everywhere, including hotels and metros. There are also military dudes standing outside every metro station exit (looks dead boring I have to say!). Roads have been closed in order to ease traffic congestion. And a lot of foreigners have been visited by some visa officers to have their passports/residence permits checked. It's pretty clear that Shanghai doesn't want anything to go wrong at this big day.

Last night Hu Jintao was in town and hosted a dinner reception for some of the 834986349 foreign ministers/presidents/kings/queens/high level visitors that were in town. I was not even close to being invited, but sometime around 10pm, the whole city sounded as if it was about to explode, as the result of some pretty massive fireworks setting off. Today I got up at 4.30 in order to be able to leave at 6... So yeah, better keep going! I'll be back with an Expo report tomorrow!
Posted by Jonna Wibelius at 5:10 AM

Sounds like security ran nearly as high as the excitement. But, hey, this was why you returned to the big city, right?

I'm going to Shanghai for a few days this month -- nothing Expo related.
I have limited time -- just 2 nights and 3 days.
Do you think it's worth stopping by the Expo? Or do you think that the time wasted waiting in line, etc, won't be worth it?

Funny Jonna , I in a way would love to be there with my Shanghainese Wife , but then .. oh better NOT . haha

What an exciting time, must be a huge buzz to be in Shanghai right now! Look forward to reading more about it.