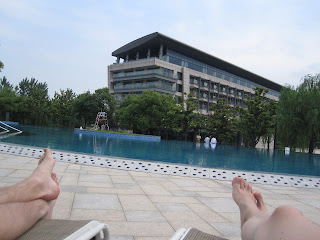 Back in Shanghai after a wonderful wknd in Sheshan! On Sat morning we caught metro line 9 from Xijiahui to Sheshan station (quite a few stops, but overall very convenient). I was quite surprised when I saw the surroundings, this was like a real suburb with cute little houses and hills.

Eventually we made it to our destination: Le Meridian hotel! Although it wasn’t the best hotel I’ve ever stayed at, it was definitely still one of my best hotel wknds ever. And why? Well because the hotel had a good outdoor pool at which we hung out, pretty much all the time. Saturday came with overcast so it wasn’t even that hot and the pool was everything but crowded.

Due to the heat and all the pool fun, I kind of forgot the importance of eating a substantial lunch. So, when dinnertime came I was completely starved, ready to start chewing my own arm. And as a result of me feeling as if I could eat a whole restaurant, we made the mistake of going for the buffet. Big mistake. I ended up trying pretty much every single dessert they had, and afterwards I felt like a walking pudding. Not to be recommended (besides, buffet desserts are never even that good?! Well at least I kept away from the chocolate fountain). Not even a super soft Le Meridian bed could save the day: I slept badly, basically being on a sugar rush all night.

I decided to turn it all around the next day. Got up quite early and went straight to the gym where I did 6 km (34 min) on the treadmill followed by a swim in the outdoor pool. Amazing! Now that’s what a holiday is about for me!

Sunday at the pool was a bit more crowded. A big Shanghai crew arrived for the famous Le Meridian Sheshan brunch and people became a bit catty about sun chairs and umbrellas at the pool. But except for that, it was a nice day. Way too hot to be in the sun all the time, but nice to sit in the shade with a good book.

Caught the metro back sometime around 4pm, and arrived home feeling as if we just spent a week in Thailand! Tanned legs and faces, and relaxed bodies and minds! Can tell you it was the first –but not last- time I went to Sheshan! It’s a perfect weekend resort if you live in Shanghai.
Posted by Jonna Wibelius at 6:59 AM

It does look peaceful...

How about the prices?