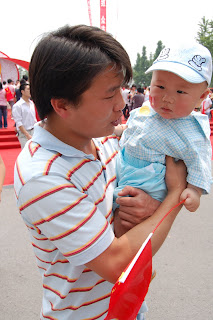 I’ currently living in a baby-booming environment. All around me, people are popping out babies. Friends from home have been doing it for the last 2 years or so, and recently one of my best friends in China also had a little 宝宝 bao bao (which I saw on Monday –only 5 days old and sooooo tiny! Real cute stuff!). We only met for about 10 minutes, but during this short interval of time she managed to tell me that her delivery was fast (“only 13 hours!!” Me: “ONLY?!”) and that the hospital in Shanghai reminded her more of a 5-star hotel than a hospital (“they had all of those kind of hotel perks, like mini bottles of shampoo, conditioner, and so on. There was an extra bed made up for my fiancé. And some hours after giving birth they served us both a romantic, 3-course dinner with champagne and everything!! Me: “Eh…. I don’t care so much for the mini-bottles of shampoo, but champagne?! O la la!”).

There’s been a recent baby boom in my family too. One of my older sisters had a baby some 1,5 years ago (a gorgeous, blonde, blue-eyed, curly-haired Sam. I can already now see him becoming a heartbreaker when he grows up), and right now she’s preggers again. This time she’s joined by my second older sister, so they are both sitting there, rubbing their bellies and talking about nappies and breathing and all other kind of baby stuff that I am yet to understand (I mean, one of my sisters have even started baking?! And up until recently she didn’t know that you can cook salmon in the oven?!). This summer when I was home, there were babies everywhere: little Sam, running around the house throwing stuff around and being so cute that you can’t get mad at him, friends-that-recently-became-moms, pushing their prams with pride and looking like their hearts were about to burst every time you told them how cute their babies were, and then of course grandparents (also goes under the name “my mom and dad” who have now shifted a lot of their attention from their grown-up-kids -yes, that includes me, and yes, I hate to admit it but I am slightly jealous of cute little Sam et al) to babysitting their grand-children.

Here in China, one of my friends have been following the expansion of my sibling’s families with great interest, constantly asking me when it’s “my turn” (although since I’m neither married nor engaged, she’s also pushing a lot on that one). Then one day she asked me:

-When you get pregnant, are you going to stop working then?

-Eh… well, I’m probably not going to work the day when I’m about to give birth if that’s what you are asking me?

-No, I mean, are you going to work during your pregnancy?

-Sure. If I can, and if I don’t have some kind of strange complications that makes me bed-bound (nightmare!!!) for 9 months I am going to work like normal.

-Oh….! (The raised eyebrows said it all: someone was not agreeing with me!).

-Well, if I’m at an early, but yet safe stage of my pregnancy I think flying is supposed to be OK.

Then my friend starting telling me the tale of her friend, who managed to win a trip to Europe in a competition, but who had to turn the price down, as she was trying to get pregnant, and therefore did not want to risk anything with a trip.

-Eh… why doesn’t she hold off for a little bit? I asked.

-Oh no… this is more important (understandable). Also, once she gets pregnant she’s going to stop working, and stay home and rest.

-She’s going to stay home and rest for 9 months?! Is that even possible in China?! (Maternity leave over here isn’t for 9 months, that’s for sure).

-Well she will quit her job. Staying home resting when you are pregnant is the most important thing.

-Eh… it’s not a disease though. You’re supposed to live normally for as long as you can….

I’ll stop here, as it was a dead-end conversation. Two non-pregnant, childless friends discussing pregnancy. We obviously know nothing. But one thing’s for sure: staying home for 9 months “resting” just because you’re preggers cannot be healthy.

Also, if staying home all that time, what on earth are you going to do when you get bored? You cannot work, cannot train, cannot… do much…. more than…. Eat!

And God forbid putting on too much weight during a pregnancy in China. My western friend who recently gave birth got gibes from her doctors and nurse because they thought she was too fat during her pregnancy (She: “but, I mean… I though you were supposed to put on weight when you are pregnant? I can’t really… diet can I?!”), and she only put on 13 kilos! She was tiny before her pregnancy, so it wasn’t as if she ballooned into a huge walrus when she got pregnant, but she still had to sit and listen to the doctors telling her boyfriend(!) to “watch his girlfriend’s diet.” Yikes.
Posted by Jonna Wibelius at 7:21 AM

haha,it is the different culture things,pregnant woman are suppose to stay at home and all the family will take care of her.
also it is different in individuls,my ex-boss,a chinese woman, she is really hard-working. even when she is pregnant,she almost works late till 10pm or 11pm. She stop working 3 days before she rush to HK and give birth to a little baby girl! all my friends(chinese) say she is crazy^^

I will never understand the attitude of staying home and relaxing for 9 months. Like you said, its not a disease.

Go on - keep moving and working even when you're preganant! can't be missing out on life!LOL

One persuasive argument I've heard for this is that its partly traditional attitudes (for example, 坐月子 - one months rest after giving birth, which in more traditional cases includes no bathing for a month. Ew.) which are a holdover from not-so-long-ago when health and sanitary conditions could be pretty bad. But its probably also partly due to the one child policy. Being allowed to only have one child, and moreover being in a society where that's the norm, puts alot of psychological pressure on parents to take a "better safe than sorry" approach.

it's not healthy to be moving around alot when you have a baby that needs to be nurtured in all sorts of way.

it is also true, when you physically stress, the baby's development will be interrupted or altered(hormonal glands), the baby knows every emotion you go through and as well as that he/she inherits your food cravings as well.

Hahaha .. don't you all see , that is a chinese Woman's way to get even with their ruling Man at Home . Honey , I can't do a thing .. but I love you and can't have nothing happen to the Baby .

Jane- Yeah there are of course things u maybe shouldn't do if you are preggers... like very physical work and running a marathon. But if you are feeling good (inside as well as outside) I think u can live as normal as possible.

Martin -if it was I would not understand why women would even agree to get preggers.

Anonymous 1 -I recently heard of 坐月子 and was a bit appalled. A friend of mine who has had a baby with his Chi wife had to take his wife to a western hospital that had a Chi doctor who would explain to her that not cleaning yourself for one month was def not healthy... She eventually chose to listen and later gave birth to a perfectly healthy baobao!

Anonymous 2 -I think it is very healthy to move around (maybe not run the fastest you can or jump around like crazy) when you are pregnant, at least when you are at an early stage. If you don't move u might become still and put on a lot of weight. At least that's what I've heard from my sisters/friends who've had a lot of healthy born babies.
Stress, on the other hand, is another story.

Shanghai Mifeng -uh... I can't understand why someone would want to do that...

I am 5'8" tall,not exactly a skinny woam and I am thinking to come to live in China for a couple of years. Will I face significant prejudice?