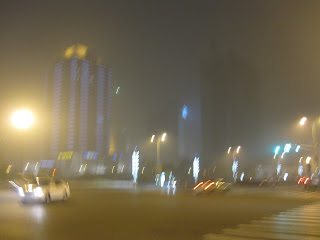 Ah… I was so close to becoming a devoted yogi-in-the-making until yesterday’s little dispute took place. A friend of mine wanted to try yoga after listening to me talking about it (see, when I like something I go all in. I know it’s not that good but I cannot help it, I get too excited), so I told her to book a free trial lesson at the same time as I was going.

The class was a flow class, quite physical if you compare to some of the other classes I’ve taken, and with a teacher that only spoke Chinese. “In for a challenge” I thought, thinking it was going to be fun.

We arrived at the club, all good. The sales girl that had promised my friend a free lesson said we could go into the class, assuring my friend (who was a bit nervous) that it was going to be easy and enjoyable. Five minutes prior to the class was about to begin, though, the sales girl came running, pulled my friend out of the class and told her that the class was very advanced and too hard for my friend. I heard stuff like “advanced” and decided to join the discussion outside the door.

-Is this really an advanced class? I said. It didn’t say so on your schedule?

-Well I think it is way too hard for your friend!! She should try the yoga basic class in this room instead, said the sales girl, pointing at a room next to ours.

-Is there a yoga basic class tonight? That was not on your schedule! I said, surprised.

-But… then how can we join it?

-Oh you can! I can fix it for you! I think it would be better for you! The teacher speaks English and it’s really good!

My friend and I exchanged looks and nods. Maybe we should simply take that class instead. Yoga basics is a class I’ve been meaning to try for a while.

-Great! The sales girl says and ushers us to the other room. As she did, she waved for some other people sneak into the flow class that we just left. The flow class that had been full up until the moment that we stepped out. This made me kind of suspicious.

And my suspicion was proved right when our “yoga basic class”… turned out not to be any yoga basics but a “yoga beginners’ class.” A class where you can ask a lot of questions, practice breathing, and so on. I was quite upset when I realized the girl had lied to us. Obviously the other class had been overbooked, and the 2 of us, one being on a trial and the other one “maybe not being able to understand Chinese” (they didn’t even ask us, but one can assume) were the perfect two people to pick out, and push into another class in order to solve the problem.

Similar things have happened to me so many times. Someone makes a mistake, and in order to cover up for it they pull a white little lie and hope for the best. However, this time I was not going to settle for simply going home in a bad mood.

After class (which left us non-sweaty and disappointed) I found the sales girl and asked her straight to her face why she had lied to us:

-But… I thought this class was better for you! The teacher spoke English!

-I understand Chinese very well. You did not even ask us if we speak Chinese. And why did you lie and say it was yoga basics when it was not?

-Eh… I thought this was your first time? Good class for you to try!

-It is not our first time! And isn’t it so that the flow class was full, and therefore you wanted to move us to the other class?

-But like… that’s not our problem. We booked this 2 days ago. You cannot first say yes and then say no!

….And on it went. On and on and on. But I wasn’t going to settle for nothing. I kept telling the girl how disappointed I was of her lying to us, that in the end she must have realized that she wasn’t gonna get away:

-Eh… so like. What can I do so that you are not so disappointed?

-Well, give us an extra class of course. I don’t want to pay for a class that I would never take unless someone lied to me and told me it was something else?!

So here we go, lesson learned once again. Never trust hasty, last minute decisions. Still, I have to obviously blame myself too, for being so stupid and falling into the trap of listening to the sales girl. In the future, they are going to have to lift me with violence if they ever try to move me from one class to another.
Posted by Jonna Wibelius at 7:04 AM

Great story Jonna. I think I have read similar things happening to you in the past. haha...well written.

What's the story of the picture, and the "clean air"? Is that another blog post?

Martin -hehe. yeah, I've fallen into a lot of traps similar to this one... especially when I first came here! Gosh, I was lost back then!

The photo is indeed from another story. That was when our landlords in Suzhou kept telling us that we should open our windows and let in some "fresh air"... hm...

This is not unique in China. Early this year, I was in Peru and I had numerous incidences about false infor or lie from salesgirls. Certainly, got many similar things in USA. But in USA, people seems more silent about it.

Anonymous -I don't think that's the same kind of lying. If someone fools me when it comes to prices and so on, I can take it. But to have someone lie to you at what is supposed to be a top-notch member's club?! Naaah, that's just nasty. But of course you r right. People are lying about everything everywhere these days. Can't let them get away with it though!