Interesting topics at a business event 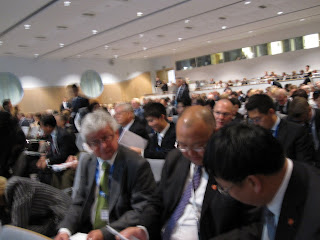 Back in my flat after a wonderful wknd in Helsinki. I really love Helsinki city, it’s such a beautiful town with loads of old buildings, cute, small shops, cosy cafes and city character. I could definitely see myself living there sometime in the future, I just have to make sure I get a fat job with an even fatter salary first because that city ain’t cheap. One of the downsides with Scandinavia…

On Friday I went to the big Chinese business/matchmaking event. It was kind of interesting. I met a lot of important, as well as not so important people. I was kind of surprised by how rude a lot of Chinese people were in the beginning. It was supposed to be a networking event, and the first 15 people I approached gave me the cold shoulder. Righty-oh. I thought that they would at least speak to me since I spoke to them in Chinese (which wasn’t the case for all the fancy smanzy Finnish businessmen in suits) but nope, they couldn’t have cared less. Oh well, there I go. Next time I’ll wear a suit and a slick ponytail too and try to look all business and stuff. Maybe then I’ll have more luck.

Eventually I met a nice bunch of Chinese businessmen that were not only willing, but also kind of keen to make friends with me. Two of them wanted me to introduce them to a Finnish trade minister who was a speaker at the event (I said I’d give my best shot –when the minister later appeared, freshly out from a press conference- three of the Chinese men started running after him, yelling for me to run with them. I declined, and I still don’t know if they managed to ‘catch him’ because I didn’t see him or the Chinese men again at the event), another one wanted to be interviewed (something I did in Chinese… kind of hard still. I can follow but once he started talking about specific details I became lost in translation) and another 2 wanted to know everything about ME.

-Why are you so tall?
-Why are Finnish people so tall?

-Why are you still wearing heels when you are so tall?

-What do you eat here in Finland to grow so tall?

-Would you consider to date a Chinese man? Even if he was shorter than you?

When I managed to steer the conversation away from me and my height (……) the men wanted to know about love and relationships in Finland.

-I have heard that Finland is a kind of open country when it comes to love. Do a lot of people meet on online dating services? A man in a fancy looking suit asked.

-Yeah, and who should approach the other one, the man or the woman? An important looking older gentleman asked.
-And how about lovemaking? When do people sleep with each other? A third one asked.

-Yes, and how open is it here about lovemaking? Can you have a girlfriend or boyfriend and still sleep with others? The fancy suit boy added.

-Do you have a boyfriend? Came from a fourth one.

-Guys, guys, guys… these are not polite questions, so I'm not going to answer you, I said, keeping a straight face rather than getting all uncomfortable as I know they were expecting me to. I suggest you go and find that Finnish trade minister and ask him. If you want to, I can translate.

Then everybody wanted to swap business cards with me, which was a bit of an issue since my company hadn’t provided me with any. Seeing that I knew it would be social suicide to appear at a matchmaking event without business cards I’d gotten a bunch from my work mate, whose Chinese name card name just happens to be:
高安娜 –gao Anna = tall Anna.

(Yes, she’s taller than me and no, she didn’t pick the name for herself. Our Chinese boss did).

Guess how much fun that was?!

Anyways, all in all it was a fun and a bit different Friday. I made some useful contacts. Got offered one serious and 2 not-so-serious jobs. And, stayed on in Helsinki to see some friends after the event. All good. But now: Monday, and time to go to work!

After hearing about the conference you didn't need to be wearing high heels I think you needed sneakers/track shoes. It made me laugh I wish I was a little bug on the wall to have witnessed it. You sound as if you handled it well, I'm proud of you.....good job!!

Jonna, that was hilarious! Those Chinese men who wanted to know everything about you! I wish I could be there to witness all those rude conversations. You know your blog is being read by some quasai government officials in China. I wonder if they are embarrassed enough after so many rather embarrassing stories of Chinese men and businessmen overseas that they would consider track them down and execute them. How dare they lose the face of their motherland in front of the world!!! HA, your blog is just filled with great stories. Please keep them coming.

How gross and humiliating. I thought men's conduct like that went out in the 50's. Anna may get more than she bargained for by giving you some of her cards.

I think it´s normal for chinese people to ask details about how people live, this cannot be called impolite. It´s just their way.

I think well-educated Chinese boys or men will NEVER ask those embarrassing questions in front of a girl they just meet. Those businessmen might have successful business, but their education level might be just so-so. But you handled the situation quite smartly!

the case of them is they even not know the business/conversation manner with others. such topics might be their common language while they do business.

when i get into a international company and join some event with Chinese trainee (yes, trainee from China and over the world) one they should learnt is Business etiquette.

Hope they can review their manner......

Pete -hehe, well even in my heels I was far from the tallest girl in the room!

Chris -well, they said it with a smirk, so I guess it shouldn't b taken too seriously.

Beep -to be nosy and curious is one thing. To ask inappropriate questions is another thing.

Ann -yeah, well actually I was thinking that all those suits must b so da** bored attending biz even after biz event. No wonder they take all the chances they can to have a good time. I would too!

Redbabe -it was indeed called 'matchmaking event'... although it was business matchmaking. I am certain... ;) There were about 0,5 women to every 10 men. And no female speakers... :(

mantse -yeah, well I bet they wouldn't have pulled this if I was a business man in a suit and with a fat business card... I sps I am an easy target!

I chanced upon to view your blog and found it very interesting as well as very informative, i was need such type information, which you have submitted. I really thankful to you, this posting help a huge number of people. Great ... Keep it up!