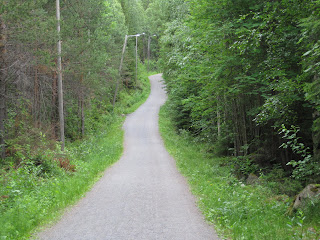 Yesterday when I came home after work I felt everything but flash. It was a rainy, gray Monday afternoon and I knew I had to get out there and go for a run (I didn’t run last week due to a sore throat). But I really didn’t want to. I curled up on the couch with a hot chocolate, an apple and a book, thinking I’ll just ‘wait a little while’ but I couldn’t really relax… I felt I just needed to get done with it. However, I felt tired and headache-ish (probably just a mental thing) so I made myself a large cup of coffee and had some chocolate… Not only did that help making me feel energized, but eating chocolate always makes me feel like exercising it off immediately, so, once I was done I decided to head outside. It had stopped raining but I wasn’t in the mood for some muddy hills so I just chose an easier, road train instead. And I ran. And lord, how I ran!

I almost felt as if I was on a high. My heart was pounding, and the legs just wanted to go faster and faster. It took me more than 10 minutes to break some sweat and I kept a speed that I don’t ever believe I have ever kept before (I’m normally a slow jogger, but yesterday I was running, not jogging) What’s going on?!?!? It wasn’t necessarily a nice feeling, rather, it felt a bit uncontrolled? Is this what it is like, running on a sugar/coffee high? After around 30 minutes I started feeling a bit uncomfortable in my throat, much due to no running in the last week. But except for that I was OK. Legs felt neither strong nor weak, they just kept going.. faster and faster. In the end I did a huge spurt, and not even that killed me. Gosh, scary! Almost like taking a painkiller and going for a run.

I’ve never been into energy bars/gels/sodas/drinks so I’ve never really experiences this sugar-rush-running before. But I have to say I didn’t really like it. Tonight I have to do the same thing but without the coffee/chocolate. Because really, I feel like the sugar is fooling the body? What to you guys reckon?

Anyways, all in all I did a 40 min speedy run. When I came home I stretched and then I jumped into the sauna... ahhhhh!!! Now that's relaxing! 30 min later I felt like a new person. Mondays should always be like this! Better enjoy it while it lasts....
Posted by Jonna Wibelius at 12:06 PM

What a lovely forest track, it even has track lamps!!!

It has to... otherwise you wouldn't be able to go there during 6 months of the year. During winter it gets dark at 3-4pm in Finland...

I don't like about sugary foods that you sometimes can't sleep for hours after eating them, because the body has to work it off.

Eating sugar means raising the blood sugar levels excessively, but if you need a lot of energy right after eating it, I think sugary food is the most efficient way of giving it to your body, since sugar is what your body normally uses anyway.

After a couple of times the sugar rush may get less intense because your body is getting used to it.

For a slower runner running longer stretches, maybe not so much sugar, but more other carbohydrates like rye, and fat is better, as the sugar will have gone down after maybe 1-2 hours, and then you would feel really powered out.

Its absolutely the coffee/sugar high. The headache thing is a big indicator that your body needs caffeine and a big reason why I stopped drinking coffee. Since I stopped my headaches have gone from being frequent to non-existent.

Personally I think you should exercise without the quick energy because it forces your body to tap into its energy reserves and burn those stored carbs and fats. Your performance was certainly better, but you were burning rocket fuel and its a deceptive burn.