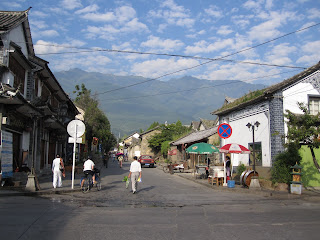 Due to time restrictions we only spent one day in Dali, but what a day that was! We got up quite early in order to try the included breakfast at our hotel (for 260 yuan/night we were expecting something decent) that was served between 7.30-8.30 am. Unfortunately, we weren’t too impressed… rice porridge (which was OK I assume), and a spicy meat sauce-and-spaghetti-version, accompanied by 2 muffins and 2 eggs. No coffee. After a few spoonfuls of soup (mom’s a vegetarian so only rice porridge for her) we left in search for a place serving real coffee, a must-do for both of us in order to turn human in the morning.

We were out on the streets fairly early and were greeted by a stunning, blue sky and some fairly quiet streets: Some men and women selling pancakes and snacks. Mothers getting their kids ready for school. Old men on bicycles. Barely no cars. It was quite wonderful!

We didn’t have to look far for a cosy café. Dali had tonnes. We finally settled for one called “The Bakery No.88” (on Bo’ai Lu) and ordered ourselves large cups of Yunnan coffee a la 10 kuai per cup. Real good stuff. The café staff was friendly so we sat there for a bit, sucking in the relaxed atmosphere and feeling very at ease. No bus rides or angry drivers were on the schedule for the day. Rather, we had a whole day of exploring ahead of us.

We started off by walking around/across/all over Dali. We went up and down every single little alley that we could find and engaged in all kinds of fun. We spoke to Bai women (who were trying to sell us their handmade cushion covers and shoes), got our shoes re-soled by a happy local who took his time and told us a bit about Dali, engaged in some people watching and chatted to everything from old women selling exotic fruits to little school children who wanted to take our pictures. I even got to pose with two young, dong-bei guys who were pretending I was their shared girlfriend.

When our stomachs started to rumble we picked one of the less clean and commercial looking places, but rather a simple, with-all-the-veggies-on-display-sort of restaurants that had tiny little tables and seats, but friendly and cheerful staff. We ordered a mix of vegetarian wonders (veggies and tofu) and had one of the best veggie dishes I have ever had in China. I have no idea what this veggie is called, but if someone knows please feel free to share because it was really good! We also tried the local speciality, ru shan（乳扇）, namely aired yoghurt that has been fried. It didn’t sound that nice but it was actually okay.

After lunch we rented bicycles (10 rmb/bike for one day) and rode to Er Hai Hu （洱海湖）, a large lake located some 4 km from Dali. We got to the lake quite late (due to several stops on the way: to take photos, to cross a big road –it was mom’s first bicycle attempt in China- to drink water, to take more photos, to figure out the way, and so on), so the last few boats were just coming in. We considered taking a boat cruise but decided not to, it was quite nice just to sit by the water and relax (and, for a magical 10 minutes or so we were all alone!). Things got even more interesting when 10 young, local boys turned up in bathing shorts, throwing themselves into the water and playing all kinds of games. After chatting to the kids for a bit we decided to go back to the city.

Back in town we did the usual stuff: ate, walked around, and had some drinks at a really cosy bar in an alley, before heading to our hotel for some sleep. Oh, during the morning –after the breakfast disappointment- we changed our hotel to a much cheaper guest house, which was run by two young Bai girls. It was clean and fresh and only 60 rmb/night and we didn’t even have to pay any deposit. Sweet.

The day in photos: 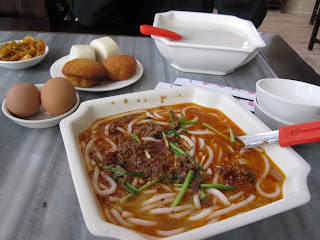 Breakfast at the hotel 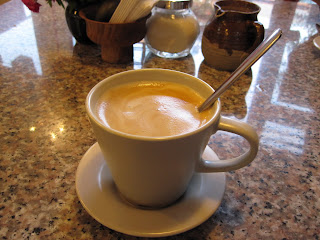 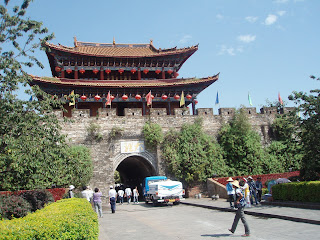 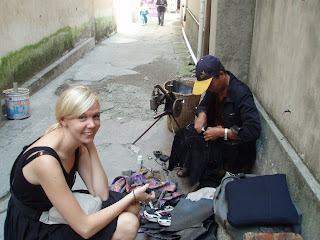 Shoe fix and a chat 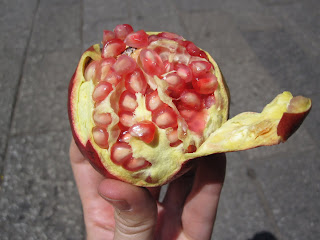 Yummy fruit, not sure what it is called 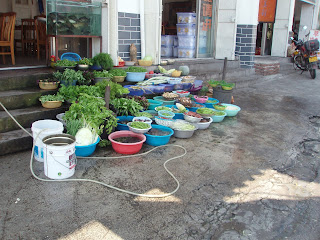 I love this kind of restaurant 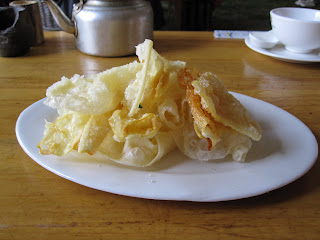 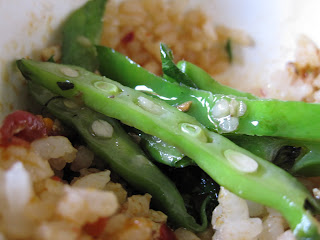 The best veggie ever! 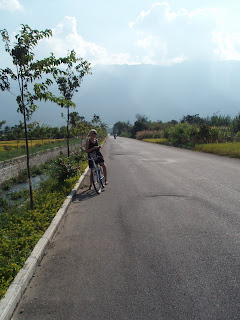 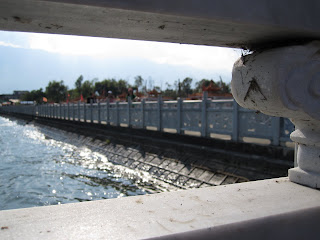 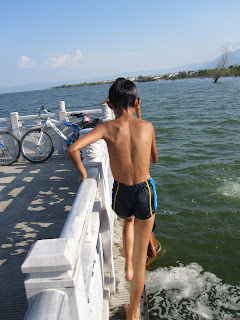 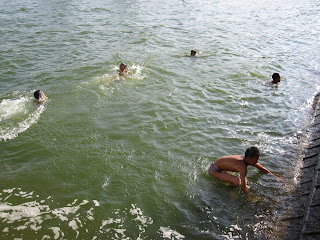 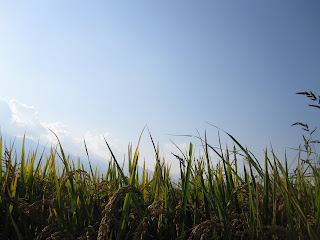 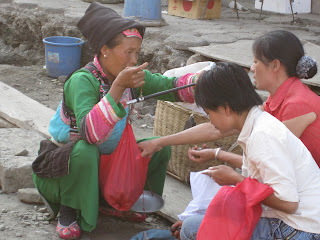 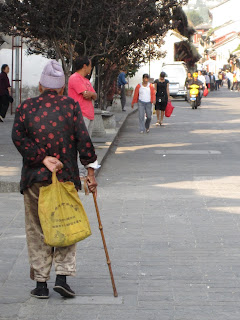 Looks great! Hotel food is usually pretty bad. I have not found any exceptions.

The fruit is a pomegranate, originated from middel east / central asia.

The vege looks just like green beans...which i thought was pretty common everywhere, unless it's something else hidden underneath the beans...

Great Post!!! Gota love the fresh veges from da resturant. By the way, da yummy fruit is called 石榴。 Not sure about that vege you had, maybe 扁豆 or 四季豆。

Pomegranates are good but I find them much too tart! Loved the post!

Pingu -yeah there's been a bit of a photo drain lately... I will have to do some new photo specials soon though, seeing how many photos I snapped in Yunnan!

Thanks for telling me about the fruit. It's yummy bit a bit tricky to eat as u have to spit out all the seeds all the time.

The vege looks like green beans but it's not. Before this veggie was cooked it was bright green, a bit smaller than a zuccini and with a sort of uneven skin.. hard to explain. I'll try to find a better pic.

Fei -thanks! And yes, got to looooove those sort of restaurants where u can pick your veges like that! :) I wish it was the same in SZ.

Regan -I kind of like them... they look really delish too :)

ha, pomegranate might be the most sexy fruit on my list, it looks beautiful, juicy and tempting, exotic to both eastern and western culture. In china, it also a symbol of good fertility, as it has many seeds, that's why sometimes you can find the symbols of pomegranates on traditional chinese wedding furnitures, imply the well wish of "have many children"

george -ha, I had no idea about any of that! Real interesting, thanks for sharing. One thing is for sure, the fruit sure looks tasty and kind of tempting!

Ya, I was gonna mention it was a pomegranate as well. I've only had it a few times in the US, as a kid. I remember it being fairly good, but a pain to eat with all the seeds.

Your day in Dali sounds like it was quite relaxing.

I need a holiday after reading this post!!
The vegetable reminds me a bit of lady's finger/okra?

You've never had a Pomegranate Jonna? Neither did I till about 14. It's an ancient fruit of the middle-east.

"Yummy fruit, not sure what it is called"
ITS CALLED:"ROMÃ"

ROMÃ and Pomegranate are the same things.