In for a challenge 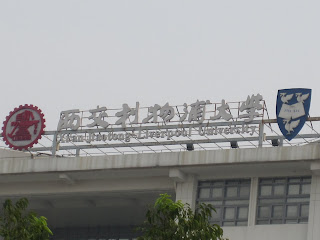 I will have to take the risk now of sounding like a complete geek, but I have to say this: I love my new university! I don’t think I have ever been happier with a decision I’ve made. Last semester at Suzhou uni was so dreadful, I didn’t feel that I got anything out of it, rather, I just sunk back and became a background person never opening my mouth in class (not blaming this fact on anyone else but me).

Now, however, everything has changed. I am in a private class. It’s only me and the teacher. What we learn is mainly up to me. All my mistakes are corrected. All my silly questions are answered. I had my first lesson yesterday morning: “Intensive Chinese.” My teacher, Liu Laoshi, was a young girl who’s never taught advanced Chinese before. The book she brought in was way too simple for me (it was intermediate level, but must have been a very initial intermediate one because it felt like a level 3 book). We chatted for a while and she quickly agreed that we must change the book. Liu Laoshi is also my teacher in “Reading Online News,” which I am happy about. We got on well and she seems really smart. We talked a little bit about political/financial system and stuff and I told her that I’d really like to learn some more vocabulary surrounding things like that. “Sure!” she said. Awesome.

I had a 2,5 hours break in between my first and second lesson (great!). I spend this time walking around the huge and clean campus (feeling like a total UFO. I am so out of place here. During my one day I only saw 2 other laowais, everybody else are Chinese), checking out the lunch options. Note to self: must make friends soon. Not fun to eat lunch alone every day.

Eventually I bought myself a Chinese magazine, located a self-study room (!!!) and spent the rest of my time in there, reading and translating some articles. Good practice. I promised myself that from now on I’ll read one article/day.

At 2pm it was time for my second class: “Introduction to Chinese Culture.” This is the course I was going to take together with students from Hong Kong and Taiwan. On my schedule classroom 272 was listed, but when I arrived there was no one there. I waited until 2pm. Still no one. I called one of my teachers. She promised to look it up for me. 2 minutes later she called back:

Great. I hate being late.

When I walked into classroom 277, twenty curious eyes were watching me, probably wondering what the h*** I was doing there.

-Is this Chinese culture studies? I asked in Chinese.

-Sure it, the teacher said.

-Whoooooaaaaaaaa… said all the students (who obviously had not seen me as their potential classmate).

Now THIS class is going to be a challenge, that’s one thing that’s for sure! The teacher, Xie Laoshi, a man in his mid 40-ies, spoke really fast, and also really quietly? I’ve been spoiled with loud teachers I guess. In the beginning I could barely hear a word he said. He talked and talked. Said this was a class of only 9 students, and that we were going to be close like a “family” at the end of this semester. In order to start things off he thought we should get to know each other. Everybody had to go to the front, write their name on the board and talk about themselves.

Excellent. My favourite thing to do! (Not!)

As my fellow classmates started introducing myself I realized I couldn’t get half of what they were saying because they spoke so quietly. I really had to make an effort to get some of it. Soon, the teacher gave me a nod, meaning it was my turn.

I was so nervous! This wasn’t Mandarin level 4 or 5, this was a class with native speakers. Would they all be able to understand me? At first I stumbled a bit, then the teacher started asking me questions, which I had no problem answering (phew!) Once I was done the teacher said:

-I should explain to you all that Jonna is actually not doing a degree at this university. She’s studying Chinese, but because there were no other foreign students on the same level as her, we decided to put her in this class to listen and learn. I think we should all applaud her effort.

Next followed a test. All in Chinese of course. There are no short cuts around this course:

-Who was the first Chinese emperor?
-Who wrote the famous book XXXX?
-From where does the famous statement XXXX come from? Taoism? Confucius? Buddhism?
-From what minority group does the “qi pao” originally come from?
(plus 10 more questions of that kind)

And, my favourite part:
-Write an essay about how Buddhism relates to today’s modern Chinese culture.

During our 15 min break I spoke to some of my classmates. Young, boys and girls from Taiwan. Really nice. But oh so young!

This course is going to include visiting famous cultural places/monuments of Suzhou, reflecting over Chinese culture, and, having a 1 hour presentation followed by a 1 hour discussion about something related to Chinese culture.

Yes you heard me. ONE hour. I’m definitely in for a challenge! 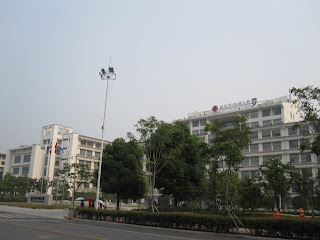 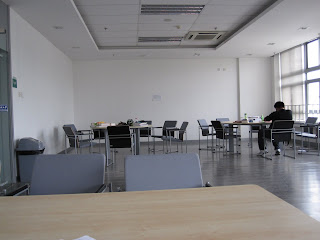 Self-study room. All clean and quiet: heaven!
Posted by Jonna Wibelius at 8:33 AM

Wow That's really a challenge, but it's worth the effort. Learning a little bit of culture will help you to understand the language better, that is what I have discovered in Canada. Don't worry Jonna, your mandarin is good. learned from your video of 虎跳峡 I believe your mandarin pronunciation is better than many Chinese. Trust me, living in Beijing for over 20 years I can assure you.

I am very impressed with your drive to learn and improve your Mandarin, Jonna. I think the second class "Intro to Chinese Culture" is a fantastic way to improve your language skills AND to get a good insight into the culture that created the language. It is great to see the same courage used to hike TLG can be used to introduce yourself in front of the class. Take care and have fun! :D

One hour presentation? Gosh, that's hard, even in your own native language.

I chuckled when you described your young classmates. They sound ke ai.

Your excitement for your classes and where you are now in studies comes through your writting and started my heart up too! I almost started to hyperventalate when you had to get up in front of class but what Carl said seems like level thinking & good advice. I'm so glad that this change is proving to be a benifit to you. Keep on pushing forward......& enjoy

Good luck with the presentation. I remember when I gave my first presentation of that length I was really nervous. I'm sure you'll be fine though!

Phew! It is really a challenge Jonna!Have fun!

xu.chris -hehe, that video was too short to be able to hear if I can speak or not... anyways, thanks for your encouragement!

carl -well that's why I came here for... to learn the language. I would be d**** if I failed. Spent so much time on it already! I also think the Chinese culture class will help a lot... I just hope it won't be too hard.

Adrian -I know... I think I'm going to use a lot of photos while I present...

Pete -thanks! Will do! Gotta keep moving, keep pushing :)

Brad -I think it will take a while before I do my presentation. First I have to see the others + work up some courage.

it's really strange, when i was reading this post, my eyes were looking at your English words, but in my mind i was reading aloud in Chinese O.o, the effect somehow gives me bit explosive feeling in my head, you should try it too *poke* ^^

it must be your excitement and determination made that effecct, great energy! Go go girl !

good luck, I understand how you feel as I am also taking real university courses in Chinese for the first time...keep positive and study hard!