No drum rolls or firecrackers 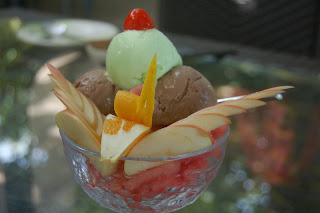 To have or not to have -turns out, doesn't really matter anyways.

I’ve now been back in China for more than 3 weeks (ahhhh!) and although I’ve been busy with travelling around with mom/ having the flue/ starting my new uni course, I’ve still had time to catch up with most of my Chinese friends. I’m not going to lie now, because I was feeling slightly nervous about seeing them all. I’ve had rather mixed reactions from people when I’ve gotten back from holidays overseas, everything from “oh you look so fat” to “you look a bit dirty” (this was when I had a tan) to “oh, your skin is glowing!” (nice one, I got this when I came back from my Christmas holiday in Sweden last year).

Some people were apparently keener to see me than others. The day after I had landed my trainer buddy Rocky called me, asking when I was coming to the gym.

-I’m so curious you know, he said. I want to know what changes you’ve had!

-Yeah, like if your skin has gone darker, if your hair is longer, if you are thinner/fatter than before….

-Eh, I’m pretty sure I look the same as always! I said. Only change I can think of is that my Chinese is a bit worse than before. I don’t really go and change that much over 2 months.

And very well. Some days later I made it to the gym and was greeted by a happy Rocky. Although he had promised he would give me a hug he didn’t. Instead we shared a lame handshake. Then came the bold once-over.

-Hm… you are really right. You haven’t changed. You are not skinnier. And not fatter. You are pretty much the same.

Some days later, however, I met my language partner. The moment I walked into the restaurant she put a hand over her mouth. I already knew it had something to do with the look of me. And very well:

-Jonna, you have lost weight! She said, before I even had time to sit down.

-Yes trust me, you have. Now, shall we order? What do you feel like today?

-Eh.. how about chicken?

-Chicken is good. How about eggplant.

And then yesterday at the gym I bumped into another trainer friend, Shan.

-I know, I went to Europe over summer. What have you been up to?

-Not much, same old… and you? You’ve lost weight.

-Yeah, anyways, how was Europe?

So there goes. Three people and we all start our conversation with talking about my body frame. For me, who’s been told I “look fat” more than 100 times here in China, suddenly being told I have lost weight is a kind of nice change (now, if someone wonders if I actually have, I don’t really know. I weight less than before because of lost muscle mass. But that’s sort of it). But I’m a little bit bummed about the fact that after a quick mention of it, that’s sort of it. Where are the fireworks, the pat on my shoulder, and the drum rolls? I mean, every time someone has stated that I look “fatter” we have spent at least 10 minutes talking about it; about how I have done it, how much I eat, how often I eat chocolate, and what I can do to lose my excess. And now, when I (according to them) have actually done it, lost all that “fatness”… then I get… nothing?!

Oh, oh, China and body images. Can’t get enough of these experiences, can I?
Posted by Jonna Wibelius at 7:48 AM

Hi Jonna! That is really quite the fancy dessert picture with your post! Looks great!

It's interesting they dont ask how your trip was until they have dissected your physical appearance first :)

People do that to me too, though it cuz I'm bloody fat!

And these people weren't interested on anything else what happened to you over summertime? They were only interested on your weight?

I have lived in Shanghai for one year and can't recall anyone telling me I'm fat or whatever. Well I don't understand chinese very well, so that might be it.. Last week one lady told me that my daughter looks like a monkey =)

Maybe that taxi driver wasn't just trying to get you to eat. Seems like the results are in..... YOUR NOT FAT!

Carl -I have to make u disappointed though.. It looked better than it tasted.

Adrian -I know. Quite obsessed society if you ask me.

Tarja -hahahhaha, that made me laugh. Glad to hear I am not the only one getting comments about my look thrown in my face all the time. I have been told I have "panda eyes" (dark circles under my eyes) several times.

Hopfrog -hehe, yeah yeah, I know I write a lot about this topic and it probably has gotten to my head. I know I am not fat... I realized that especially when I spent a summer in Scando and took a look at how people of the same nationality as me actually look.

Chinese has many funny ways to describe a kid being kawayi ^^

when they say you look thinner, normally they want you know that they think you having been working hard, or you should look after yourself,or you have been ill, or just flattering you.

so it's not really a weight issue, but more like a social greeting, ice breaker, like some old Beijingers will still greet each other "have you eaten?" (您吃了吗？）， they don't really care if you eat or not ^^