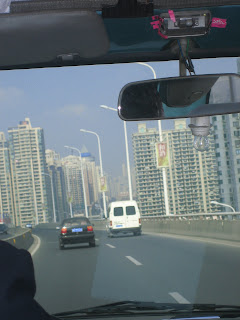 Taking the bus every morning to uni opens up for a whole range of new experiences. Stepping on the bus in an adventure itself. You never know if the bus driver is going to charge you 2 or 3 yuan (depends if the bus has an air con or not) so you have to be ready with your coins. Once I only put two and then I got yelled at and had to dig out my purse from the bottom of my handbag meanwhile the bus was driving/turning at the speed of 120km/h (or no, it wasn’t but really, it felt like that). I was flying from side to side, almost falling over several times, and I believe I was a pretty amusing sight to the passengers sitting down just where I was standing, at least they were starring at me as if I was some creature from out of space. Anyways, since that day I always prepare 3 yuan, just in case.

One morning I was dozing off at the back of the bus when the bus suddenly stopped at a bus stop. Not as in a stop-to-pick-up-passengers-stop, but as in really stopped. Me and 20 other sleepy passengers were obviously wondering what was going on, but we didn’t have to wonder for long, as we suddenly saw 2 men coming out a minivan parked next to the bus. They were looking everything but happy and one of them was carrying a long, baseball-bat-like baton! Me and the other passengers glanced at each other. What was going on?

We were soon to find out. Some serious road rage event had apparently occurred meanwhile we had been lost in out iPods and mp3-players. The bus driver might have done one overtake too many, or, he’d given the finger or god knows what, but the two men from the minivan were so angry they started hitting the bus with the baton, screaming abuses to the driver. I thought our driver would just start the bus and wave them away, but he was in no such a mood. Instead, he got up from his seat and stepped out of the bus.

By now, all passengers had realized what was about to happen and most of us (not me, I promise, although I had to really hold myself back not to) stuck their heads out the window to witness our bus driver and the two angry minivan men pushing and screaming at each other. We were all more or less waiting for the big “bam!” but it never came. Instead, the angry men got back into their van, and now it was our bus driver’s turn to yell and hit their car. They eventually drove off and the driver came back to the bus and hit the road again. However, he was apparently quite upset, because the speed he set off in? Oh my oh my. Anyone who’s ridden a bus in China knows that they aren’t really snails on the road. When someone speeds up as the result of being upset, it can get kind of dangerous.

I seemed to be the only one concerned about the fact that we might have a car crash so I was holding on tightly to my seat. That turned out to be a good idea. Some mad turns later we came in an immaculate speed towards a traffic light shifting from green to red, and the car in front of us stopped. The bus driver had to do a quite dramatic stop in order not to hit the car. And the result of this little stop? Well, a man who was standing up flew like a little insect to the other side of the bus, hitting the windows before he fell to the floor. Handbags and shopping bags flew all over the bus, spreading their content on the dirty bus floor. Everybody seemed rather shocked, except for the driver who didn’t show any sign of regret. When the light turned green he went back to his crazy speed-driving, meanwhile I was helping an old lady to pick up her groceries from the floor.

I was rather happy when I eventually got off that bus, and I can’t say I’m loving these kind of rides. Then again, getting to school has proven to be a quite adventurous experience, spicing up my mornings and giving me that extra kick that my morning cup of coffee sometimes fails to deliver.
Posted by Jonna Wibelius at 8:02 AM

I have to agree with you...bus drivers in China are very unique. Glad you survived the trip so you could blog another day!

Our taxi driver once got cutoff pretty bad and your so right. His foot hardly ever left the floor and spent a couple miles of weaving through traffic to catch the guy and stop in the middle of the road to give him a few words out the window. It wasn't as crazy as yours but ya, they get the road rage too. Nice to hear you helped the old lady pick up her groceries. I know i'd be on my hands and knees doing the same thing. hehe.

I really think getting a taser will help things. You meet so many crazy men Jonna.

Glad you're here to tell the tale!

Fei -yup, I've experienced that one ;) Bus rides in China sure are bumpy! But at least you don't have to worry about being late.. unless the bus gets stuck in a traffic jam, it sure is fast!

Ed -Yeah, got to help an old lady in need! Always. I also try to offer old people my seat in China but they rarely accept.

See, it is experiences like this that make me happy that I am no longer in China. I also think you are a little nuts to enjoy this kind of crazy life but to each their own. If you are willing to live it and write about it, I am willing to come back everyday and read it. Just stay safe. We wouldn't want anything to happen to you!
Becky

Adrian -I have a weakness for everyday excitement... bumping into crazy men definitely bodes for some dramas.. some better than others ;)

Becky -well f course things annoy me at times, but I still prefer this life to the predictable every-day-is-the-same life I had in FI this summer... I promise to be careful :)

Crazy driver. Glad you held on for dear life!