A change of mind 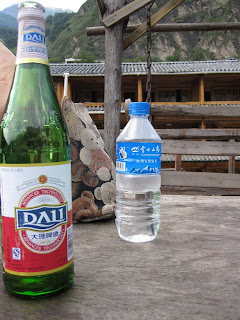 My favourite restaurant in Suzhou is a fairly cheap and simple Sichuan restaurant. It doesn’t look anything special but the food is always top notch, the waitresses are friendly and efficient no one has ever messed up my order. None of the staff speaks a lick of English but the restaurant is still popular amongst westerners who rely on their “zhe ge/ na ge” Chinese (+ a good picture menu) to order food. All in all, it’s a simple, well-run and well-organized restaurant; the complete opposite to many other restaurants here in Suzhou.

One example of the “opposite kind of restaurants” is a western restaurant at Suzhou’s rainbow walk. I have since a long time avoided this place (especially after a slightly annoying ice cream experience that occurred earlier this year) but some of my friends still go there, and yesterday they had a quite interesting experience:

They went in, 7 guys, wanting to have an expensive, imported, 50 kuai/bottle beer each.

When all of them had finished their beers, two of the guys asked for another beer. The other 5 asked to pay.

7 new beers and the bill came.

5 of the guys protested, saying they didn’t want a second beer, but simply pay and leave.

The waiter was clueless and went to get some of his workmates.

The workmate listened to the situation, apologized, and then offered the 5 guys the 5 bottles of beers for 25 kuai/each, giving them a 50% discount and saving the beers from being a waste.

The guys all accepted the deal and enjoyed their beers. They then asked for the bill again.

-Eh, this is wrong, one guy said. We were promised these beers would be half-priced, so the correct bill should be 125 kuai.

Then the same waiter that had offered them the discounted beers appeared, and said:

-Eh, yeah, well we decided that 25 kuai/bottle is too cheap. So you are going to have to pay the full price after all.

A big discussion followed, and in the end the five guys won the discussion as they simply refused to pay more than 125 kuai for their beers.

I was laughing out loud when I heard this story, because this is definitely the first story I’ve ever heard of when someone first offer someone a discount and then have a change of mind.

Note to self: keep sticking to Chinese restaurants in Suzhou.
Posted by Jonna Wibelius at 9:47 AM

Sounds to me like they never intended to give the discount in the first place, and were looking for a way to trick them into consuming the beer, so they would feel obligated to pay.

Sometimes I think that some people are beginning to think that they can push foreigners around because the foreigner will have an aversion to taking an aggressive stance, perhaps out of fear of the law or because they just don't want to be bothered.

Kudos to your friends for sticking up for themselves and not getting hussled. I'd definitely not go to that place.

Brad -probably, although I really don't get that kind of attitude. Why would you do something like that? It almost makes me feel like going to that very restaurant, order myself some food and then suddenly "change my mind" about it all and walk out. I wonder how well that would have gone down.. ehhh. I bet they would have called the police.

I'm sure they would have, but then you could've told them that you just changed your mind the way they changed their mind about trying to charge foreigners for beer they didn't order. Then they might feel a bit embarrassed by their behavior.