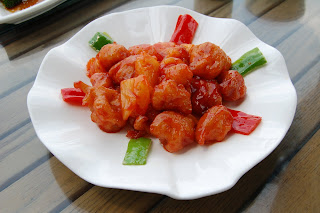 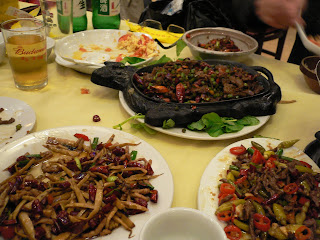 or this?! I know my choice!

Some days ago I went to a real fancy, Chinese restaurant. I might be the only one thinking like this here in China, but I really feel that the fancier the place, the worse the food. Since I was attending this dinner as a guest I didn’t have to worry about paying for these overdone dishes, but I felt for the man who did.

Some of the stuff we ate includes:

Goose’s feet (basically soft skin and bones. So fatty I felt my stomach turn as I was munching away), giant prawns covered in mayo (I love the prawns but hate the mayo. Mayo should be forbidden here in China! They put it on everything, like fruit salad for instance, and also, they put way too much!), stinky soup with a green lake-like vegetable that you were not supposed to eat (although no one told me that until I had forced down about half of mine), and sweet/sour cucumber peel. Also, when out on a dinner like this there is simply no turning back. I ate to be polite and to save our precious, professional relationship from being ruined. This, however, is far from the first (or last) time I’ve been in this situation.

For someone who generally loves simple dishes like sliced potatoes 土豆丝, eggplant pot 茄子煲 and mala tofu 麻辣豆腐 (and then down everything with a bowl of plain, fluffy rice!) eating at a fancy restaurant is quite troublesome. For starters, I can forget about my rice bowl. When dishes are so "good" (and expensive) there’s no way I can ask for a bowl of rice on the side. Second of all, the fancier the place, the weirder the dishes. While we were munching goose’s feet the other week, our host told us that these sort of dishes were the best of the best in China: “the more complicated, the better! This is Chinese food art!” And third of all: at a fancy restaurant there is no such thing as leaving leftovers or “not liking” the food. You eat to show your appreciation and to make your host happy. I almost had to start a war the other week when we had finished our food and the host suggested I’d take the leftovers home with me as “takeaway.”

This experience is far from my only one of that kind in China. I’ve been to numerous similar dinners, and I’ve downed everything from pig’s ear (disgusting –there’s a reason why we use that as a dog snack in Sweden) to some kind of jelly fish (after trying to chew it and realizing that it was impossible I had to swallow it with a cup of tea) and duck's tongue (still don't get what there was to eat on that one?). I love the idea of meetings over dinner, but next time I’m going to insist on picking the restaurant and settling for a simpler place.
Posted by Jonna Wibelius at 7:13 AM

hahaha. I have read a great article written in New York Times. It details why westerners (or non-East Asians to be exact) are sometimes bewildered by Chinese fondness for food that are tasteless and consist mostly cartilage. It's the Chinese fondness for food texture (chewiness, hard/soft, slippery feel etc). I understand it's hard for you to appreciate it, try handing an elder chinese a good flavorful cheese and he/she will think you're giving him rotten milk! I've tried swedish food before, consisting of pickled fish on tasteless crackers/biscuits and colourless fruit drink (elderberry?), they taste horrible!!! I have eaten and enjoyed eating many varieties of food globally, but those two swedish food are yucky!

hendrian -so true!! Especially the cheese thing. As for Swe food, I don't know what biscuits u r talking about but I hate pickled fish/herring. Not sure if Ive ever tried elderberry juice?!

"the fancier the place, the worse the food"

If I think back to my two favourite meals (not home cooked) in China then this is definitely true. They were both in restaurants that would send shivers down the spine of any Health & Safety inspector.

In Chinese restaurants outside China, this is a little more hit and miss.

I believe it was these rye biscuits. i recalled that it's brown, dry and tasteless. And you eat it with the pickled fish.
I think it may be Juniper berry syrup juice.

but pig ear is so crunchy and delicious!

Yep, fully agree. The more expensive, often the worse the food, and the smaller the portions.

And agree with you about most of your post too!

I see you're fully loving Shanghai. What's the population there? 30 million? That's a lot of people for you to practice your Chinese with :)

I do not like mayo too, not on Chinese food. I guess restaurants make them 'complicsted' to make more money and it is considered a specialty !!

Century eggs. Only thing I didn't like about it is removing the muddy covering. And wait till you get to taste one of our delicacies here- "balut", boiled duck egg(embryo already developed). Or "Pinapaitan", goat stew with its innards and bile mixed in. And then there is the Korean kimchi for appetizers. Bon appetit!

I agree with you, cheap Chinese food is the best. I always ate at the stalls in HK, Macau and Singapore and it was delicious. The expensive restaurants are tourist traps. The worst ones are the "fusion" restaurants.

Yes I used to love visiting China,especially Guangzhou and traveling on my own.Actually I found review foodie travel books good value.Also a couple of French girls pointed out some restaurants for me to try.
Going back there with my new Chinese wife,I experienced the type of restaurant you talk about.My most miserable culinary month ever.
Someone says to follow the Taxi drivers and eat there.
However,done well, I do like cartilage foods.

I would like to personally invite you to list your blog on our Expat Women Blog Directory (www.expatwomen.com/expatblog/) so that other women can read about and learn from your expat experiences.

Many thanks in advance for your contribution and keep up your great blog!