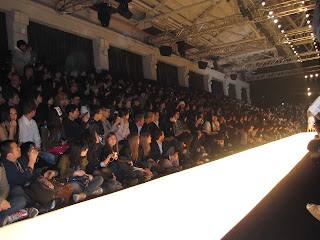 I've had the most mad, crazy, but also wonderful weekend! A lot of hard work has finally seen some fruitful results: last night, Swedish fashion designer Ann-Sofie Back showed at Shanghai fashion week! It was the first time a Swedish designer showed in Shanghai, and it was a big hit! The venue was so packed that people actually had to sit on the floor, struggling to keep their legs of the runway!
And my involvement in the show?! Yeah, I bet you all think I work for the Back brand now -which I don't. Back is still to be established in China. However, they need good helpers on set, right? And that's where I come in.
Ann-Sofie Back showing at Shanghai fashion week was part of a larger project that I've been working on for months: an exhibition called "Swedish Fashion -Exploring a New Identity," which showcases 13 relatively new fashion designers, that represent an alternative to the stereotypical picture of Swedish fashion as blonde, functional and minimal. The exhibition is currently running at River South Art Centre (an amazing old warehouse). If you’re in the neighbourhood I recommend you to go and have a look. It will be up until May 23.
Some pix from last night's action: 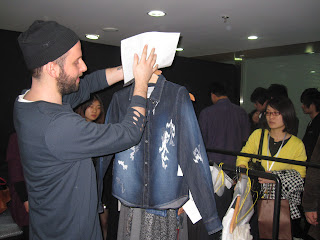 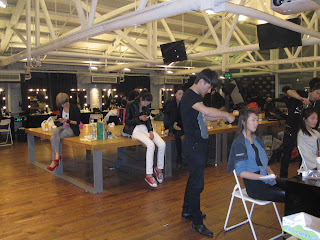 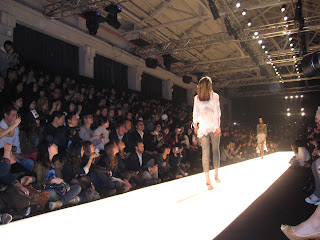 Shanghai Fashion Week's most packed catwalk so far -people had to sit on the floor next to the runway! 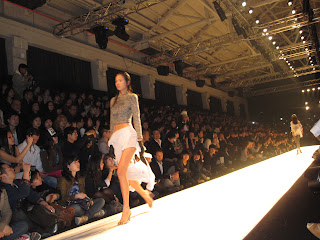 One of those pretty models that we picked during the casting some weeks ago. 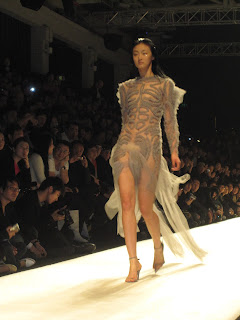 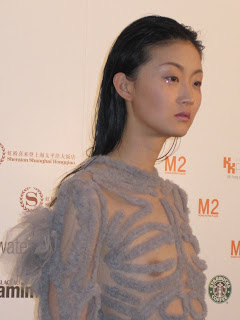 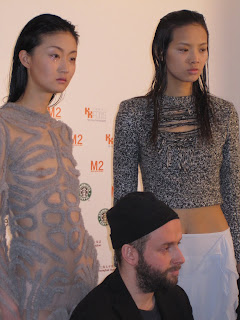 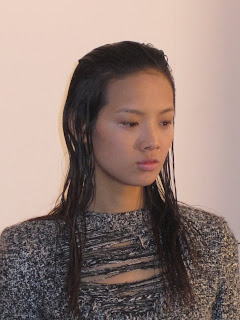 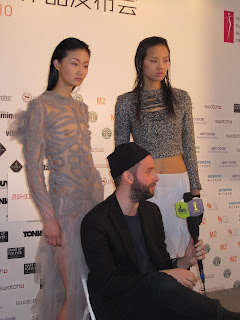 Daniel Glasman being interviewed in the press room after the successful show. What a night!
Posted by Jonna Wibelius at 10:30 AM

The two models don't look happy. Is it their job to look like that or that's the way they are?

Congratulations on a successful event! I have to agree that I have never understood why high fashion models have to look so pained as part of their job?! They are both pretty girls, I bet they'd look even better if they looked happy.

They are both very beautiful. And, as a guy, I am not going to complain about the dress either. heehee

it looks like a see through curtain in the brady bunch house.

Wow. They have no boobs whatsoever. That is crazy skinny.

oh!! the china had also fashion week!! last two weeks ago were there the fashion week in korea too !

Wow, well done on the event. I can't believe what a different life you have in China now. From learning Chinese in Suzhou to having input in a rather large scale fashion event. What an exciting time.

I agree with what others have said about the models, what's wrong with a "cheese" (or qiezi) for the camera, hehe.

I LOVE the finale dress! That is so amazing. Your life sounds so much cooler than mine. I live in NYC and have my own dating blog www.carlysdatingchronicles.com but I love that you are in Shanghai!

I want to congratulate you for that very success full event. The both girls are so beautiful. The outfits are stunning. I wish I am in that event.