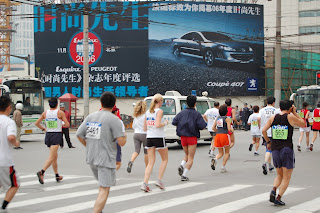 Forgive my absence. I’ve stared a new habit, and I still need to work out how to fit blogging into it. See, last week was so insanely busy at work, and with the Expo around the corner I am pretty sure that the following weeks will be quite similar. So, I’ve started a new morning routine: namely 5km on the treadmill before work.

It’s actually not as bad as it sounds. I’ve been a morning person for as long as I can remember, and if I pack my bag the night before it’s simply the “getting out of bed” part that’s slightly hard; the rest comes by itself. Anyway, with this new habit I’m at the gym at 6.30 and then run for at least 30 min, before showering and getting ready for work. It’s a pretty good routine (not as hard to run during the mornings as I thought) but I am still to figure out how to squeeze blogging in on a more frequent level than twice a week (planning to do the morning work out 3 times/week).

Otherwise, life’s pretty good. I’ve started to feel human again after last week’s fashion fever. Ann-Sofie Back won an award for “Most Natural Fashion” by Shanghai Fashion Week at the closing party of Fashion Week on Tuesdays night. Go Back! I hope it’s not the last time we see a Swedish fashion designer in Shanghai.

Shanghai’s cold as a fridge. Like, really cold. I bet it’ll be summer any second now, and it will hit us without a single warning. Winter came late last year (not until December I would say), and it seems as we are about to skip spring for 2010 and head straight into summer.
Posted by Jonna Wibelius at 6:41 AM

If you are going to the gym at 6:30, why not get up at 5:30 to blog...or, just sleep at your computer. That would be multitasking. hehehe

Keep up the great work Jonna. Blogging when you have such a busy and hectic schedule is not easy. But personally, I really enjoy your new posts.

Hi Jonna! I'm glad to hear you are making time for your running, even if it is only on a treadmill. I've started running again too after taking the winter off (and gaining 5 lbs!) So now have worked up to 3 times a week, 5km or more per run. Too many goodies and too little exercise... time for me to get back into shape! LOL. Have fun and thanks for blogging.