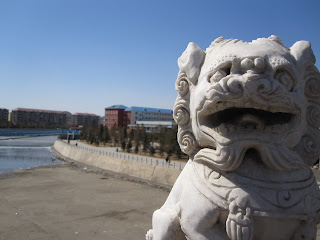 It kind of hit us when we lined up at the gate at Hongqiao airport last Thursday night, and received a mix of curious and surprised glances from our fellow passengers (all Chinese). What on earth were 2 laowais doing going to Hohhot (or 呼和浩特 -Huhehaote in Mandarin –try saying that 5 times fast!) over the weekend? When we, 2,5 hours later, landed in a freezing, and somewhat deserted city, we started asking ourselves the same question. We seemed to be the only couple staying at the hotel (Holiday Inn on Zhongshan Lu –excellent location), and it felt kind of odd, walking through empty corridors to locate our room.

Terribly scared of being caught in one of those notorious sandstorms that we’ve heard about, we were delighted when we woke up the next morning and were greeted with an amazing blue sky and sunshine. We curiously peeked out of our hotel window, observing that locals were neither wearing scarves nor hats, but rather some pretty thin spring jackets. Although we are supposed to be Vikings at hearts (and not scared of the cold) I shivered at the thought of stepping outside in a thin jacket, and put on pretty much every single piece of clothing I had with me before hitting the streets.

After a bit of walking, however, I realized one thing:

What might have felt like “being cold” for the first, tentative 5 minutes of walking, quickly changed into “being hot” and then “feeling as if I’m in the middle of a sauna.” The air was super fresh, and the sun was beaming down from a clear blue sky (sorry for repeating myself, but I simply cannot get over that sky, it was as if someone had painted it blue with pastel colours!?). It wasn’t actually that cold during daytime! To tell you the truth, the weather was some of the best spring weather I’ve every experienced in China (and very similar to a Scandinavian spring).

Another observation: There were no other laowais on the streets of Huhehaote –causing us to become a miniature version of a circus show. No kidding –and no exaggeration. I’ve had my deal of being “stared at” in China, but this was something out of the ordinary (I suppose tourists are rare at this time of the year). While young people giggled and pointed, older people actually stopped right in front of us, staring at us with their mouths wide open. Some 846982364 people secretly took our photo (only ONE young guy actually asked! Nice young fella!) and one group of young people (3 girls and 2 guys) got so excited (?) that they decided to PUSH one of their friends at us while walking?! Very odd way to greet strangers.

Best of all, however, were the children. They were not hiding their excitement, screaming LAOWAI!!!! From the top of their lunges when they saw us, and then giggling following us around town. This happened numerous times, and at one point (in a shopping mall) we had a group of 6 kids following us around, screaming with delight every time my boyfriend turned around and said “hello!” to them.

During our first day we felt kind of uncomfortable about the constant staring that seemed to have no end. Even having breakfast at our hotel turned into a freak show, as we were stupid enough to pick a window table and ended up facing the busy Zhongshan street outside our window. Two women almost fell, as they were so busy looking at us, that they didn’t noticed the speed bump on the ground.

The hotel staff was professional, not giving us any special attention, or well, at least not until the first morning at the breakfast buffet, when I asked one of the chefs (in Chinese) if they had some more yoghurts. The next morning, as I was making myself a cup of coffee, one of the waiters showed up next to me, smiling and saying 早上好！(zaoshang hao! –goodmorning!). I happily replied and went back to my table. It didn’t take long for her to come up to me again:

-So it’s true what the chef told us? You can speak Chinese?!

-Yes I can, I said, thinking to myself that "wow, for the first time of my life, I've become hotel gossip!"

-That’s amazing! After the usual, compliment-deny-ritual, she asked me:

-What are you doing in Huhehaote at this time of the year?!

-Ehh… We want to see the grasslands… and ride ponies… I said, realizing how stupid it sounded the moment the words were out.

-But the grasslands are not green yet! And it’s very cold up there.. much colder than in the city.

-Ah… we are from Scandinavia. We are not scared of the cold, I said, tying to add a convincing tone into my voice.

That night, we could not help asking ourselves if we had made a mistake travelling to Inner Mongolia during the beginning of April. My childish dream of galloping across the grasslands felt rather naïve when I said it out loud. However, I’ve never been known for listening to what other people say, and the next morning we got up at 6am in order to travel to the grasslands of Xilamuren…

More about that tomorrow! Some pix from Huhehaote: 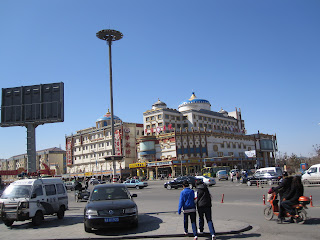 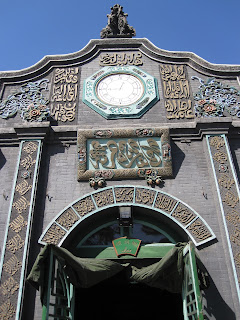 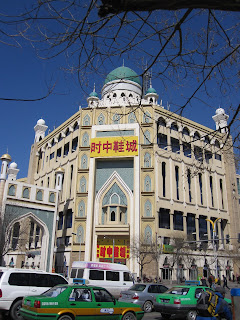 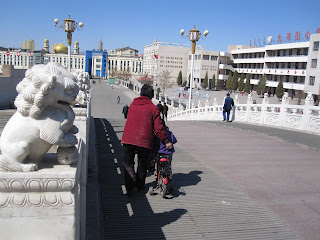 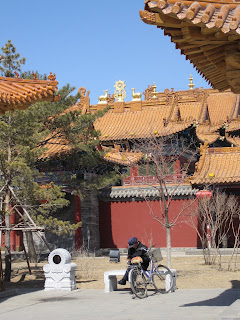 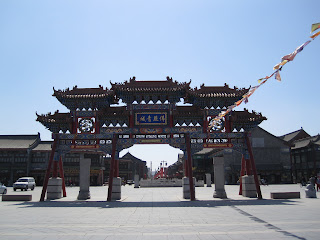 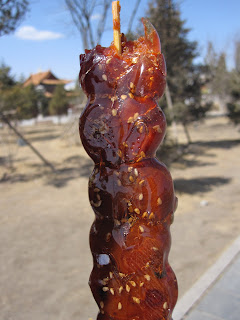 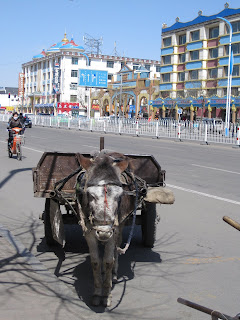 Posted by Jonna Wibelius at 7:26 AM

Great pictures, and great photos Jonna. Thanks for sharing the experience. I am looking forward to the next installment.

I know what you mean about the incredibly blue skies. In Harbin, before getting up I used to lay in bed looking out the window at the blue sky and incredibly bright sun. You could be fooled it was a summer's day with the sun splitting the rocks, until you opened the window and the minus silly degree wind hit you at the back of the nose.
Absolute best way to wake up in the morning :]

Looking forward to reading about the grasslands and part two of the freak show!

Some days I get some stares here in Taipei county, when I'm in more traditional parts and it can be a bit uncomfortable for me, if I have a bad day. I'd just wish nobody would look at me, but well, they do. But what you described is like thousand times worse. I'll remember this post, next time I have few people staring at me. If I was in your shoes, I'd probably be moody. That's just too much attention for me. Glad that you took it lightly. Kudos to you :)

Hi Jonna, I don't know if you remember me, I wrote the diary of a loawai in China blog. Since they blocked blogger almost a year ago I ended up stopping blogging altogether (using a proxy was just too slow for me).

I've just spent quite a long time catching up on your blog....think I'm almost up to date. It's great to see what progress you've made. I think the last time I read you were leaving Suzhou back to Sweeden for a job. What a surprise to see you now living in Shanghai, and the job you have sounds fantastic. What a brilliant opportunity you've found.

I've actually left China now...for good probably. I've come back to the UK to study....felt like the right time after almost 3 years.

Anyway, I'll keep my eyes posted on your blog again!

Enjoyed your post! I'm looking forward to more of your Inner Mongolia adventure! I have friends traveling there in a few months to adopt their daughter. It's definitely going to be a circus for them!

A thousand stares and you're still smiling! Ride on!! Your trip sounds exciting - thanks for the stories.

Martin -thanks! loved the experience -go if you get a chance!

Little Tiger -yeah, those skies were really something... :) Now I understand why you chose to live in Harbin. I wish the air was as fresh in Shanghai...e hum.

MKL -Yeah, I'm used to a bit of staring from living in SZ, but the way people looked in Hohhot was just... over the top. The "pushing a guy onto us while walking" was way too much. I also get annoyed on bad days, but not so much nowadays.

Chris -of course I remember u! I often checked your blog even after u quit blogging, just to see if you'd start it up again.. Ur blog was one of those China blogs I really enjoyed. I understand your reasons for not keeping the blog alive via a proxy server though, way too slow. I couldn't live wihtout my VPN!

I'm glad I stayed on in China, even though I had my moments of homesickness. I'm so glad to be back in Shanghai after 2 years in SZ, and working suits me much better than studying. How did you go with your gf, Kimi -righ? (I have an odd and selective memory, I'm good at names, faces and what people wore on special days -so don't get scared). Did she join you back to UK?

Bach mama -it sure will! Prepare them for the amount of attention they will get... :)

Keats -well... I cant really get mad at them for staring, they are not being rude... just curious. So better just to laugh about it (that's what I say on good days. On bad days I get mad, haha!)

Hi Jonna, good to hear from you again. Glad that you're doing something that's suiting you more, and Shanghai is certainly a brilliant city to be living in.

Things with me and Kimi are still great. She's not with me yet, it was just impossible for her to come with me right now. We're just starting the visa process....which is going to be difficult. We were actually quite shocked at how much there is involved -- crazy! I think I'll track the progress of it all on my blog. I'm actually sending some documents off tomorrow! Speak to you soon :)

amazing... I can't stop reading your blog, there is huge amount of interesting information... I'll go to take my favorite tea and will return to your website. Btw, I recommend to everybody this tea http://www.iherb.com/Yogi-Tea-Kava-Stress-Relief-Caffeine-Free-16-Tea-Bags-1-27-oz-36-g/5473?at=0
It helps to concentrate and gives me power. You can use this code YAB426 for discount.

yeap,u visited the old district in hohhot and saw the native and traditional thing. Hohhot is my hometown!! I love it!!

Great post! I'm looking forward to going to Hohhot this year. Always nice to read a fellow traveller's first hand experience. I'm sure they freaked out over your blond hair. They freak out here in Japan too when they see Scandinavians!

Hey thanks for your article on hohhot I have enjoyed my experience there and you described it very well. I would highlight that the city varies dramatically between winter as you described so well to when there is snow and or wind.. I have to say I am from South Italian extraction so maybe I am more comfortable with or at least used to hot weather. Dramatically my last time in Hohhot during the annual festival the city was beautiful with decoration and lights with the background explosions of fireworks. However most of the small businesses were closed and 90% of the population and traffic on the roads were absent. Amazing contrasts.....