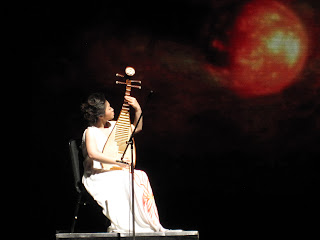 Last night after work I went to a Chinese concert at Shanghai Grand Theatre. Not as in a Chinese artist’s concert, but more like some sort of Chinese orchestra, lead by a Mr Xu Jianqiang. I must admit that I had a hard time grasping the concept and the idea of some of the songs. Not only are Chinese instruments (like pipa, erhu, guqin, guzheng and you name it) completely different when it comes to producing sounds, but the whole idea of composing melodies seems to have a different meaning in the East and the West. I have always loved classic music: Mozart, Beethoven, Sibelius, Bach, Vivaldi… as well as some less famous and established names (when I was in high school we often got free tickets to amateur symphony orchestra concerts and I went to most of them), but I am having a hard time to define what I heard last night. Meanwhile some of the songs were OK, most of them were extremely vague when it came to an actual melody. I think I had my worse moment when four young people got on stage and started hitting four different kinds of drums for 5 minutes straight. The slight headache I had immediately got worse.

One big exception, however, was a woman playing the guzheng. I had no idea what sounds that kind of instrument could produce. It was beautiful, but again, as soon as some kind of melody started to form, it came to an abrupt end.

I think I have some serious studying to do before I’ll be able to enjoy this kind of music to its fully (makes me wonder how Chinese people feel about western symphony orchestras), not sure if I ever will actually. However, it was fun to try and to get a glimpse into a new world of music that I am yet to understand. 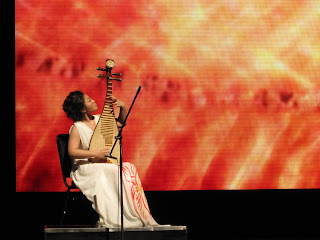 This girl played the pipa to a multimedia video. The performance was quite interesting, but I would have preferred if she would have played the guzheng. 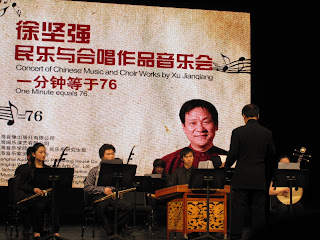 Whole orchestra + Xu Jianqiang on stage (we were the only 2 laowais in the audience)
Posted by Jonna Wibelius at 6:51 AM

Oh, I see how it goes now...you have time to go to world expositions, and Chinese concerts, but hardly any time for us people waiting for your next blog. hahahaha

Just kidding. Thank you for sharing.

you made me miss China more.. thanks for sharing.. china is really a place to be right now..

Jonna , Have you ever seen the 12Girls Band play ? They are the best of China has to offer . My opinion anyway . They play those Instrument's like Angel's . They are the reason what brought me to China and later fould my Wife there . I owe these Girl's big time . Never forget seeing them in Anaheim ( Calif. ) in '07 . Would not miss them for anything if near by again .

And why does one minute equal to 76 again?

to 胡崧：
must be hard time

What a great photo! I love the pipa! I used to play a little, but I was always terrible.

I love the way you suggest that the directions taken by Chinese melodic structures are really different from the way it is in Western music. It's funny how a lot of Chinese melodies do just seem to -- drift. You can tell they have a logic to them, but it's as if the logic doesn't operate in the same dimension as the one we're used to, so it's hard, or impossible, to catch.

I hope you have many opportunities to enjoy future concerts! 自弹不如听人弹！

I've read through your blogs and your life seems so interesting! I hope that I can one day travel to all these places that you have been to! Can't wait for your next blog. I would love it if you checked out mine!