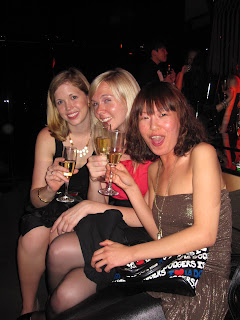 One of he things I love the most about living in Shanghai is that life here is so unpredictable –something that suits my restless soul perfectly!

Just take last Friday. I was at work feeling tired and not in the mood for doing anything, until a workmate convinced me to go for an after-work cocktail. We ended up having such a good time, that when another friend asked me if I was up for some dinner and a Dolce and Gabbana store opening party, I said yes, despite me being in office clothes: high waist pencil skirt, pumps, no make up and you name it. Not very high fashion or D&G-like.

We arrived at the D&G party around 10 pm. Surrounded by beautiful people, local celebs and champagne I knew it was going to be a good night.

I had so much fun with my friends, and sometime around 1am I found myself dancing around together with a Palestinian actor. I bumped into some other people I know (it’s pretty much always the same crowd at these parties. Shanghai’s not as big as one might think), and decided to join them to a Japanese bar that celebrated its 2-years anniversary.

I’d never been to the place, so imagine my surprise when we walked in and were greeted by 2 Chinese drag queens?! Hilarious!

While we were sipping our drinks the drag queens started dancing on the bar. The crowd went ballistic but it didn’t take long before the police came. (Can they smell people having fun in this city?!)

Somewhere between the drag queens and the police I decided to leave. But what a night! Love going out in Shanghai! It’s so simple and so unpretentious.
Posted by Jonna Wibelius at 9:00 AM

What I want to know is, what were the drag queens wearing?

Flyingfish -leather and lace... tight, short dresses in crazy colors. Everything tacky that u can imagine ---they wore! Haha! And wigs of course! Long, strawberry-blonde stuff!

Time to let your hair down . Only thing it's yours for real not like the drag queens'!!!

Keats -haha, true. But the drag queens were gorgeous! No, really, they were! :)