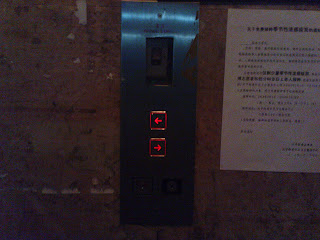 Since I moved into the building where I’m staying now, there’s been this elevator situation.

Our building has got 2 elevators. Two, non-synchronized elevators. Two elevators with two, strange looking buttons, that everybody who wants to go up or down needs to press in order to get somewhere in the building. However, step into the lift and you never know where it’s going to take you. As you see on the picture, there’s no button indicating if it’s going up or down.

The up/down thing was OK (or OK, I admit, it annoyed me, especially after spending numerous mornings going to the 24th floor to pick up people instead of down when I was late for work), until that day when one of the lifts stopped working. Yeah. Just like that. No warning sign. No nothing. Just a dead button that didn’t react when you pressed it. And one, poor, dead-slow elevator serving a building of 24 floors.

You see, if it was an efficient elevator it would be OK. But it’s not. It might actually be some kind of ancient elevator type, because it is not only slow, but extremely slow. When it stops and opens it does so for at least 45 seconds. And that’s a LONG time when you’re standing on the 9th floor waiting, and seeing the elevator slowly making its way from the 18th to the 19th floor, stopping for 45 seconds at each.

And no. Don’t even start telling me to take the stairs. I’d kill myself in an instance. I tried once, during the weekend when I was neither stressed nor wearing high heels, and it was a disaster. Dark (no lights at all at most floors), moist, stinky, uneven steps and nothing to grab onto. I was Bambi going on a suicide attempt. And I was wearing bloody sneakers!

So taking the stairs down during a weekday when I’m in my business attire (featuring sky-high pumps, yes, every day, and skirts-that-were-not-made-for-walking-or-moving) and feeling slightly stressed is a no-no. I simply have to wait for the elevator. Every single morning. Just like everyone else in my building.

I’ve been trying to keep a brave, cheerful face for one week now. One week, and it hasn’t been easy. I’ve been late for work most mornings. Even though I try to leave 10 min earlier than normally.

Last night I lost it, and jumped on the poor old man doing some sort of building maintenance (?) at the dirty lobby.

-When are they going to fiiiiiiix it?! I cried, pointing at the dead elevator button and the “under construction” sign on the non-working lift.

-One month? Hahaha! Maybe it will take them one month to decide. But to get it to work again? I will take more than three months!

At that very moment, a lot of strange thoughts flashed through my head:

From nowdaays onwards: always being late for work? Never again being able to wear heels to work? Not running down to the convenience store for a quick tub of ice cream at needed moments? Having to squeeze in with the residents of 24 floors every morning (after having waited for them for 10 min). Being Bambi in the stairs on a day when I simply cannot cope with this all? "Swedish woman, damaged for life as she tried to take on dangerous stairs in pumps."

I’m still coping with taking all of this in, so please, dear readers: Be kind.
Posted by Jonna Wibelius at 10:14 PM

Sounds horrible!
You should organise the entire building, send an official letter threatning that you will collectively stop paying rent if they don't clean up and properly light the staircase and decide on the type of elevator immediately.
That should speed things up a bit.

Are Apartments there that hard to come by ? Or are you now under a 10 year Contract to stay just where you're at (hope not for your sake)to just get the H*** out of there ?

I do feel for you Jonna , I have not been through it .. but have seen simuliar things on my Visit's to SH .

NOOOOOOOOO. This is such terrible news to my already terrible "China week!" Ugh. Months of no elevator? Wahhhh.

If I remember correctly, you mentioned that you are paying 5000/month for this apartment. It just boggles my mind that they are charging us that much without providing adequate services like a functional elevator.

WOW...that really sucks! Jonna, you have a great way of putting your life to words. I can feel how frustrated, and how annoying your situation is.

I'm with Wannes! I am sure you don't have much time, but you really should organize. It's ridiculous that you should have no efficient exit. (Also probably against fire code.)

Jonna, heres some of my(as an american) impression and thoughts of Sverige that I would looove for you to try and rationalize for me here :D

1.) Everyone in sweden has the same ringtone!..and they all use Sony Ericsson (with an occasional nokia in between)

2.) Every swede gets up and starts hurrying to the exit on a bus or on the train long before it get anywhere near the stop? Kan de bara ta det lugnt el?

4.) girls do not use nail polish on their toenails nor flip flops, and about 80% wears black or white tight leggings on a daily basis.

5.) Cooks kräftor with just salt and dill? (blir alla svenskar gallen?? :-O) come on, seriously, you gotta cook it right, like we do it in canjun country, with lots of spices, corn on the cob and potato!

and a few others osv, like the whole kronofogden and personnr system that I wont get into here :)

The mysteries of the Orient!

Wannes -Maybe I should... but it sounds like a lot of work. I think I'm simply too lazy for that!

ShanghaiMiFeng -no they are not. But I simply dont have time to move for the time being. I'm working pretty much every wknd.

Anonymous -Slowly getting used to it!

Flyingfish -one of the charms with living in China.. and u r right. I dont have time to do anything more than to complain about it.

Alex -Do u realize that u r asking the wrong Swede? I haven't lived in Swe for 10 years! I am not the most "typical" Swede anymore. Here are my answers:

1. Never had an Ericsson. Same ringtone? well no one in my family has the same ringtone that's for sure.

2. What? Nah, that's what it's like in China!! In Sweden everyone sits down until the very last min?!

3. Could not agree more.

4. No idea about the current fashion code. Leggings are universal though, no?

5. Crayfish with just salt and dill... yeah well.. we tend to love the natural flavor in Sweden. Call it boring if you like but it's actually quite healthy.

6. That's more Finns than Swedes. Ever been to Finland? Salmiaki is huge over there. I'm personally not a huge fan, but I don't mind it.

hmm..Jonna, are we are talking about two different swedens? or maybe you need a special visa just to go to Skåne? :P

I feel like outsiders get special treatments in sweden too. I dont know how many times I have gotten away with things that the locals wouldnt have.

and swedes love to practice their english with me too. Though its not as blatant as perhaps what you go through.

Have you ever tried pretending you were an american or aussie when you are back home? could be a fun little experiment for you to try.

* Use sneakers the get over these stairs, then change shoes to high heels while riding the metro.

* Let the fire department know the stairs are not sufficient as an emergency exit and that the house management is breaking the public safety law.