Kids with a heavy load 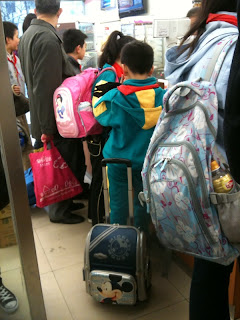 On Saturday, since our office does not follow the Qing Ming Jie holiday schedule, I was enjoying a day off and popped into All Days (convenience store) to get some ice creams for the pancakes that I was planning to make later (yeah, really made the “most” of my Saturday as you can hear. FYI: now on a no-pancake diet for the next 2 months –it went a bit overboard). As I was lining up to pay, I noticed the cute, Chinese kids that were milling about –some with huge backpacks and some dragging around mini suitcases with Mickey Mouse prints. Were they going on some kind of school trip?

Oh no they were not, I realized, when I 5 minutes later stepped out of the store and saw one of them being picked up by his grandpa on a scooter. They were just heading home after a normal day at school. Carrying such a load of heavy books, that they drag them around in mini suitcases rather than carrying them in backpacks. Just like me when I was a kid. Not.
These kids sure are carrying a heavy load around, not only mentally, but also physically. 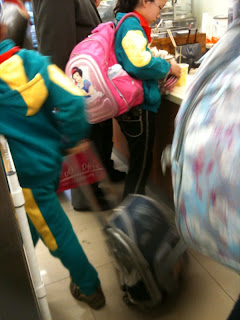 this was me in high school, not middle school. In Korea usually each academy gives kids a backpack (mostly for advertisement) but it means that for each school they go to they usually have a separate backpack. I guess it's better for their backs that way though!

I had that many books to carry in middle and high school. My parents always wanted me to carry around a rolling suitcase for my books, because it was better for my back. At the time, there was no way I was going to be so "uncool" as to use a roller suitcase for my books! Now that I'm only 23 and already have back pain, I wish I had just listened to them.

I really feel sorry for the kids that have to go through the education system in China. Pretty much misses out on their childhood. I know my cousin who was in grade 5 has to go to school from 7 to 5. Once they start junior high next year the hours go from 7 in the morning to 7 at night. I can pretty much that he does more school work everyday than I did in University. Its brutal what these kids have to go through but there little they can do.

Uhh I don't think this is cute at all! I remember when I was a kid.. it was heavy to go to school those days when you had to carry your gym bag... other days, no biggy. I cannot believe these kids are carrying so many books around. I feel like primary school was a big playground for me, and I still turned out OK.

Uhhh I meant the kids are cute. Not carrying all those books. xD

Do you think part of the problem has to do with provision of lockers? I used to carry all my books to school in a huge sports bag. But as soon as I got to school, I put them in my locker. Do schools in China provide lockers, in general?

In Hong Kong, a common complaint is the lack of space which is why, for instance, universities do not provide accommodation to all first-year students (even international students) and schools may not have much space to have lockers.

Funny thing is in Hong Kong, the maids (i.e. domestic helpers) usually carry the heavy backpacks for the kids ... even though some of the maids are typically smaller than the kids!! Lol.

I think this is normal they look like regular size bags to me, you should come to Ireland

黃愛玲 -yeah, the kids are gorgeous!

ewaffle -It was worth every calories... And made me hit the treadnmill the next day out of guilt.. haha!

hksarblog -maybe, I don't know if they even have lockers here?!

Sarah -it's not about the size, it's about the fact that they are so heavy they cannot carry them. But maybe it's just me who finds it strange. I've never seen kids roll their mini suitcases to school in Sweden. That's all.