How to master a squat toilet when you can’t squat 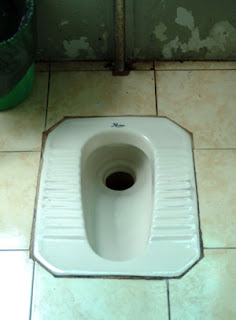 One of my biggest fears before my first trip to China was the toilets. I’d heard so many horror stories about them. Stories about toilets with no doors, toilets that didn’t flush, toilets that flushed so strongly that you were sucked into them… (no, not really, but almost!)

My fear wasn’t simply shallow. I actually had my good reasons. 6 months prior to my first China trip I had managed to slip on an ice spot and break my left foot. Although the foot was back to normal, my ankle was still stiff and I couldn’t really bend forward… or squat. So imagine my dilemma when I on day 2 in China, dressed in sky-high pumps was faced with my first squat hole toilet.

It wasn’t like I could just hold back and go later. I really HAD to go. After several cups of green tea my bladder was on the verge of bursting.

So I had no other choice, but to squat (mainly on one leg, while the other one went straight out in the air…) as much as I could and hope for the best. Of course it went terrible. I almost instantly fell backwards and managed to miss the hole with one inch. Desperately grasping onto everything in my reach I eventually found a position that I could stay in without falling (although I was swaying slightly). Getting up was torture and when I eventually emerged the toilet there was a bit of a line outside, and I tried to ignore people’s giggles when they saw my red and forced face.

How I survived the rest of my 3 weeks in China with my stiff ankle? Yeah well, that’s a mystery to me too! All I remember is that I never wore those pumps again.

But seriously. Don’t come here unless you can squat. Or at least do some squat training beforehand. It will help. Really.
Posted by Jonna Wibelius at 11:54 AM

haha there are those same "toilet holes" in peru and bolivia when i was traveling there. Loving your blog!!