My first (and hopefully last) car accident in China 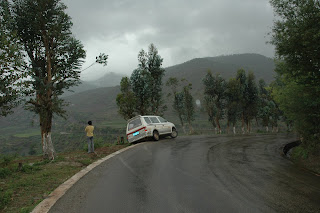 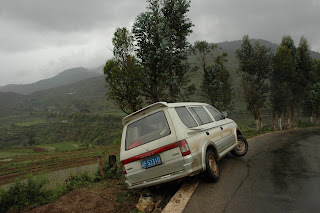 I was on a field trip in south China’s Yunnan province when I had my first car accident in China. We were driving from the town Yuxi to the mountain village Daxi, an isolated area in urgent need of development. With me I had the volonteer workers Vance (who also drove our car) and Lotta, as well as my friend and translator Panda (yes, this is her name!). We were a happy crew and if it wasn’t for the fact that it was raining quite heavily, I might have even enjoyed our five hour drive through the beautiful mountains.

But the heavy rain made the roads slippery, which made me… nervous. Much due to the fact that we were travelling at a very high speed. (Our driver, Vance, didn’t like to drive around the mountains at night, so obviously he was eager to reach the village asap).

After driving for maybe 2 hours (and already getting lost once) we were going down a curvy hill. I was in the middle of telling Lotta about my experiences of China so far, when I looked out the front window and saw the road disappear in front of me.

Although it happened very fast I still remember things so well, as if it went in slow motion. Vance was pulling the steering-wheel, while screaming in Chinese, and the next second I was thrown to the left, landing hard on Panda and getting a bag of litchis (that I had been holding) all over me. Of course there were no seatbelts in the back seat of this van. There seldom is in Chinese taxis or vans.

Now we were damn lucky due to 2 reasons:
1. This didn’t happen at a steep cliff, and
2. The car never flipped over.

It was a white-faced Vance and three shocked girls who climbed out the car. Panda was in obvious pain due to me almost crushing her, but except for that no one had suffered any wounds. Vance dialled some emergency number and then followed 2 hours of waiting (in the rain) for a maintenance car to arrive. During those two hours, two trucks that came from the same direction, and in the same speed as us, almost repeated our mistake. We soon decided to move away from the highly slippery curve that was far more dangerous than it looked. 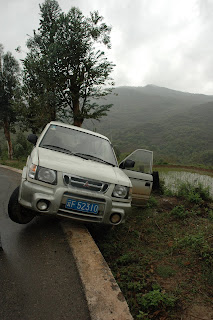 When the maintenance guys finally arrived they looked slightly amused. Within 15 minutes that had managed to get the car back on the road and we were asked to pay a hefty sum. Before leaving, one of the guys told us that during the last three days him and his crew had been back at the same spot to pull up cars that had had similar accidents. When Panda asked why they didn’t put up a warning sign he just smirked and walked away. Too lucrative for business, maybe? 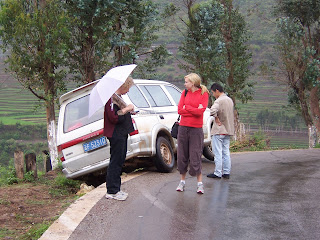 Posted by Jonna Wibelius at 9:31 AM