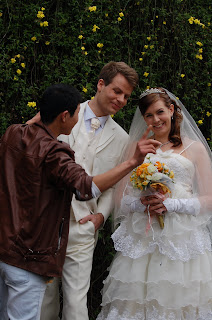 This blog is turning into a wedding blog, sorry, but I just have to tell you about yesterday’s experience as well and then I will lay low on the wedding stuff for a bit (hard not to be influenced when you have a sister who is soon to get married –and super excited about the fact- staying in your house).

My bf and I decided to give my sister and Michael (her hubby-to-be) a quite original wedding gift (compared to what you normally give at a wedding in Sweden), namely a all-Chinese-styled wedding shoot!

I am sure that anyone who lives/have lived in China knows what I am talking about: most Chinese cities are full of wedding photo agencies, that specialize in shooting wedding couples (in different outfits, except for the traditional wedding dress there are also several other outfits to chose from –you can dress up as a Japanese Geisha, a French knight or a fairytale princess –the cheesier the better seems to be the mantra) and then printing the best shots in a ‘wedding album.’

Since you cannot do anything like this in Sweden (at least not unless you are willing to spend a minor fortune) we figured it would be a different and fun experience for my sister and Michael, as well as a memory of a lifetime. So, we booked them a one-day wedding shoot with an agency called ‘Paris Love Photo’ (!). They sell specialized wedding-photo packages from 1,500 yuan to 6000 yuan… we chose one of the less extravagant ones, and negotiated the package a bit (for instance, we weren’t interested in any photo enlargements, so instead of that we asked for more photos on the additional CD that you get with your album, as well as one extra outfit for them during the shoot). 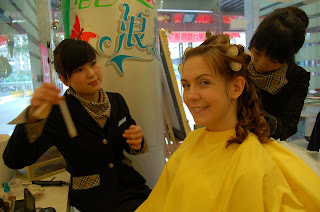 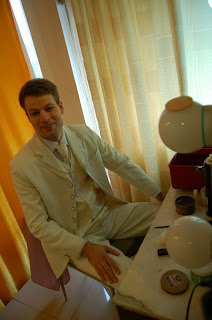 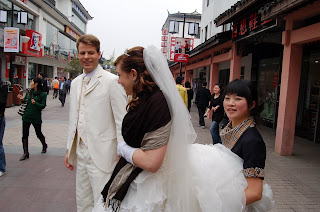 We didn’t tell my sister or Michael anything until they entered the shop, and their jaws dropped when they realized what they were up for. Then followed a fun day of choosing outfits, doing fittings, and make-up and hair fixing… My sister (whose name is Eleonor by the way) got her hair and make-up done 4 times, claiming that she felt like a total princess (because there were at least 3 girls fussing around her at the same time). 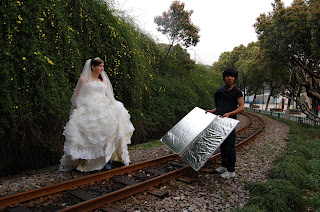 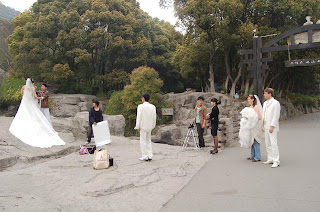 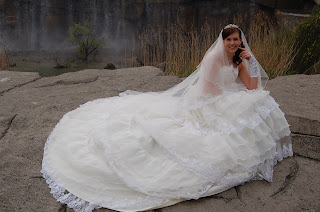 The first shoot (when they wore traditional wedding clothes –or, OK, not really traditional as in the west. Eleonor wore a white, over-the-top wedding gown and Michael was in a white, creamy suit) took place outside so we went with a mini van (together with 3 different couples) to Suzhou’s Amusement Park in Suzhou New District (SND). There we shot photos at 5 different locations. A large number of staff followed us around everywhere, making sure my sister’s make up was OK, and that Michael’s suit looked good. They also had a special ‘pose guy’ who simply worked with helping the couple nailing the right poses. This guy was hilarious: all tiny and flexible (bit like a jelly man), firing off cheesy pose after cheesy pose (it was the whole ‘finger on your chin and look aloof’ style going on most of the time). The young boys took a great liking to Michael and especially one of them (with this big, fluffy hair) wanted to follow Michael around everywhere and help him. Hilarious to watch. It looked like my sister and her boyfriend had a blast.

The outdoor shoot took ages… (5 different locations in one park). We left at around 12pm and came back around 4pm… then followed the indoor shoot… different outfits (they choose Geisha, traditional Chinese outfit, as well as some other, too-weird-to-describe-stuff). Another 2 hours of shooting followed until we finally were done. 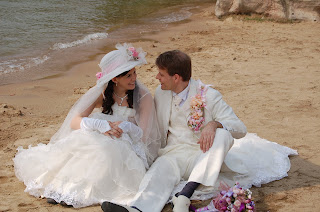 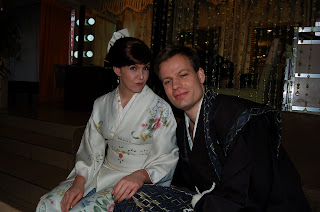 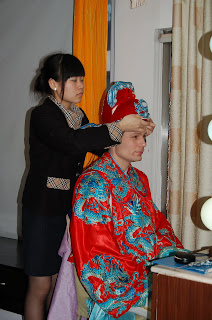 All in all –an interesting day. And a fun wedding gift. And I have to say that oh my G…. how much better it is to live in China now and do stuff like this when I can actually speak some Chinese. No one at the agency spoke English so I was translating all the time, and it worked quite well. When we left all the girls stood in the door and waved farewell (throughout the day we were treated as minor royalties seeing that Eleonor and Michael were the first laowai-laowai couple to have a shoot done at this agency… Michael’s height –some 190cm- also helped adding to the novelty) and I was asked to come back soon and ‘have my own photo shoot.’

-Not possible, I said. My boyfriend doesn’t want to get married.

-Well don’t worry about him. Come and do your own shoot! Your own photo album with shots only of you!!! They all gushed.

Hm… an ego photo album of only me-me-me? Yeah, not sure if I am there quite yet!! 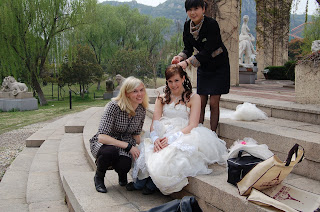 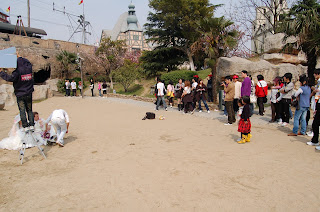 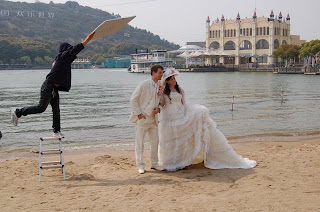 Posted by Jonna Wibelius at 8:39 AM

OMG, this is amazing!

good for your sister!

Jonna, that was a nice memorable gift, something they'll cherish forever. For the price you paid, how many photo shots did they get ?

Incognito -thanks, I'll pass that one on! :)

Chong Hum -I hope so! For the price we paid they will get 2 albums (one small and one big, normal album size) with 16 photos (they will pick the photos themself), then they will get a CD with... hm.. how many was it... 46 or 56 (?) photos (re-touched) that they can develop if they want to. They will also get some framed shots.

I am not sure how many photos the guys took during the shoot. Not an extensive amount. Although I was tagging along with my camera shooting too, so we have hundreds of photos already.. hihi!

What an interesting idea. I'm struggling to understand the connection between a wedding and the costumes, but regardless, it sounds like a fun time.

That is AWESOME! You only get to feel like a princess once, or twice in this case since I'm sure she'll get more princess treatment on the wedding day. What a great gift for you guys to give them. I'm sure it was a fun day!

What a great idea for a wedding gift!
I am very impressed Jonna!

that is so cool! what a fun experience for them. i wonder if they do that kind of thing here in america...

Its such a unique wedding gift :D!

They will cherish it forever.

Am I the only one who thinks that last photo with the guy on one leg is hilarious?

When I was at one of my Chinese friends birthday party, we got to see her wedding photo shoot. I was kind of disappointed that hers was fairly normal. I was all ready to see her dressed up in weird outfits. :(

Their CD was still pretty cheesy though. Heh heh.

Glad you all like the photos/the idea!! Maybe I'll do a wedding shot photo special this Sat where I add some more ones... ;)

Woai -hehe, I am with you here 100%.. I love that shot! In fact, I think most of my photos are much more interesting than 'their' photos coz I have all the 'behind the scenes' shots (like that leg shot, and also photos of how my sis is holding up her wedding dress and then you see the jeans she is wearing underneath! haha!)

Casual observer -yeah, the costumes makes no sense at all.. just a fun thing to add to your album if you wanna spice it up a bit (you can also make it an entirely wedding album)

Sounds like it was a lot of fun. I'll think about doing it next year when I go to China with my husband.

something about spring, I guess...

She looks so beautiful!

That's definitely one of the good things about living in Asia. You find so many things that seem crazy cheap compared to prices in the US, or in your case Europe.

There's still so much I have to take advantage of while I'm here!

I love the pictures. I think it's a great gift. Something you might not do for yourself but would totally enjoy if someone gave it to you. Your sister and her boyfriend look very happy.
When my husband and I got married 25 yrs ago, there was a baby grand piano near the altar in the church. I climbed on top of the piano with my chin in my hand and my husband pretended to be playing the piano. Our 'traditional' photographer thought we were nuts but it was one of our favorite pics.

Wow those pictures are amazing. I didn't know you could get stuff like that done. What a lovely gift!!

So fun! I love dressing up! aka... I think I should have been born in Asia...

wish your sister and her bf have a wonderful life~~

I did the wedding pictures in Shanghai before my actual wedding in Los Angeles. It was pouring and freezing but the shots came out great and I had a lot of fun. Husband on the other hand....was not liking the see through 70's inspired yellow shirt in one of his outfits.

We felt like celebrities because passerby's were taking pictures of us with their camera phone. And I posed for them too...LOL!

Thanks for all your nice comments... my sister is musing... :)

What a great idea!

The photos were lovely and it was funny to see how much your sister and her boyfriend really got into the spirit of it all.

Gosh,Did you realize you are doing a totally free advertisement for the photoshop? You should ask them for a discount or something!

anonymous -when something is good there is nothing wrong with spreading the word, right? I think what I paid was very decent considering how good service we got. And great service I am always happy to promote for free :)

I recently came accross your blog and have been reading along. I thought I would leave my first comment. I dont know what to say except that I have enjoyed reading. Nice blog. I will keep visiting this blog very often.

Your sister does look like you, especially in the first charming photo !!!
Who else is she supposed to look like ??
:-) :-)
SpaceAlien

Awesome pics!
you should take their idea and have a set of professional photo shoot of your own! it's also fairly common in the Chinese culture. most girls take it during their birthdays to keep their memories when they are still young. you can have your own style too: cute, sexy, conservative, mysterious, fashion magazine like
you'll love the pampering services!