I love love love having visitors here although it really turns your whole every-day life upside down. Farewell school, character writing, eating healthy (it's been 7 days of eating out straight now... ahhhhghhh!), and exercising. Obviously it is all worth it in the end, even though today's exam (in grammar) is going to go completely downhill...

However.... however tired I get I take my sleep-needs to my bed, and not like these guys: 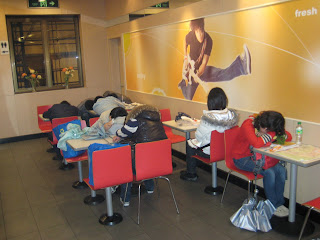 This photo is taken at 4am at McDonald's when we came in for an... ehum, 'early breakfast' after a night on town.

It is normally hard to find a table at a busy place like McDonald's in China, and this night it was extremely hard, because most tables were occupied by sleeping young people.

As usual, I cannot help but wondering WHY they are spending their night at Maccas rather than in their bed? They were all kind of well-dressed and stuff, so instead of thinking that they were homeless and actually didn't have any other place to go, we came up with different theories:

-Big night out, like us (although no one was in their party stash.... hmmmm)
-Early morning shift, probably taking place at some company close to McDonald’s, and to be able to sleep in they decided to crash somewhere close-by?
-It's trendy to sleep at McDonald's? (JUST a theory!)
-They wanted to be first in line at McDonald's the next morning?
-Kicked out from home?

Yeah, like I said, this is a tricky one. Feel free to present your own theory of the sleepers at McDonald's in the comment's field!
Posted by Jonna Wibelius at 7:09 AM

Maybe they went out on the town, clubbing or something, and didn't feel capable of making it home safely, or live far away and are planning on going home in the morning? Missed their train maybe?

That is kinda weird. In Singapore, people wouldn't be allowed to just sleep on the tables. They would be thrown out of the restaurants or the police would be called.

They worked at the night shift and are waiting for the first bus!!

@Brad F. It's not that weird, they do it as well in Japan and in South Korea. In Singapore just about everything is illegal, so that's probably why people can't do it. ;)

Kanmuri -any idea why??

Jonna...there's the same phenomenon in the Wudaokou neighborhood of Beijing. When I first saw it, I was really curious as to what was going on. After a little investigation, it seems that most of the sleeping beauties are students who come to McDonalds to study and then simply fall asleep from fatigue. Why McDonalds to study? Well, it's a warm, well-lit place that's open 24 hours, unlike student dorms which are often cold, cramped, and turn off the lights at a set time every evening, around 11 pm or 12 midnight. Not very conducive to the extreme studying that Chinese kids are known for...
This is just what I heard from a few friends, so not sure how true it is. I never did wake any of them up to get a real answer.

I've never understood this too. I thought of all the same reasons you mentioned but still couldn't be sure of the exact reason. I like le embrouille blogueur's possibility, they might just be waiting for the earliest bus to go home.

I have seen this kind of thing in the hallways and, believe it or not, bathrooms of a major university in the US, but not at 4 a.m.

I am almost positive that most of the young people stay there overnight are students. I have to say I am REALLY, REALLY impressed by the work-ethics of some of my countrymen. I mean they REALLY take studying seriously.

I remember I was in Beijing university at the beginning of September last year and the library was PACKED with people studying. That is the beginning of a semester, just imagine what it is going to look like during the exam time.

When I studied in China they warned the American students not to take their Chinese host students out too late, because once curfew sets in they aren't able to get back into the dorms. Maybe this is the case? It still sounds strange to be doing en masse...

If they're university students, they may be locked out of their dorm. Many of the dorms at my Uni lock the outside doors at 11:00PM, so a lot of the students go sleep at McDonald's if they're out past 11:00.

Students that have been locked out of their dorms?

Usually they're waiting for the first bus or subway that starts around 6am.

i support the idea that they waiting the first bus or metro. this is very common i think...... any place is better than MacDonald's as a cheap cafe or a pub that you can chat whole night there?

Alex, seanisbored, woai and the rest of ya all -thanks for clearing this one out for me. I should have known, I study at a university whose dorm closes at 11pm as well! (although I have heard that u can wake the dorm ayi to be let in -although it isn't a popular thing to do!)

Interesting phenomenon. It's kinda weird, but why not? I was going to use this idea (sleep anywhere mentality) for my China Car concept, to have the seats fold flat into a semi-bed. Looking at some pictures of public sleeping, one guy was sleeping full length, balanced on top his scooter on the side of the street.

It is common in USA to see the same thing usually in the department lounges. We used to meet to do homework together and stay all night in the ChE lounge till classes the next day.

When a local laundry place opened up that stayed open all night and served beer/food we moved to there ... you could do your wash,eat, drink, homework, and sleep all in one place!

I would assume they are students too.

well, just take a look at their stuff. Maybe they're all students to prepare for some exams and need a place to review their books.
When I was a student in the university, I sometimes stayed up late for the coming exams. ：）

@Anonymous Person: Well, you just made me think of something. In Asia there is strict control over students. Maybe that's why they go nuts and go on murderous rampages when they get to US Universities? Been a lot of that lately in the US, and always Asian guys.

@Brad F, your last comment on Asian students going postal in the U.S. is interesting. I am Asian living in the U.S. and was a student here once. Honestly, school was much easier in the U.S. for most students from Asia. There has not been "a lot of that lately" (i.e., Asians going postal) as you have described. Only two so far, but even one is way too many. I noticed that in both cases, the shooters had been picked on for years because of their poor English skill - at least that was how they had felt. I personally think the biggest problem for them was lack of true friends in this new country. Asians are usually very competitive and are more jealous of each other. The recent shooter Voong was obviously mad at fellow Asians since most of the victims were Asians or immigrants from other countries learning English at an immigrant service center. Asian Americans need to step up to help our fellow, newly arrived friends.

Ah, well I know it was only two teams really. There was the big one at Virginia Tech, and then the one with the girl in the cafe. Also, it's sort of unrelated but there was a 42 y/o Asian shooter at a US immigration office that killed 14 I think. It just seems to be popping up in the news a lot recently.

Probably studying overnight and taking a nap. It's not very uncommon to do so too in my country (Singapore) just before major exams. You can witness the same phenomenon in the airport too, haha!

There's free air-conditioning, easy access to food (unlike some libraries...) and the staff wouldn't really *kick you out* if it's the peak hours - probably just invite you to leave.

Otherwise they'll just leave you alone so long as you buy something from the restaurant and place it on your table to show you've been a customer.

I've noticed this phenomenon at the Shanghai McDonalds as early as 7 at night, and by people well beyond student age. Oddly, the restaurant doesn't seem to care, but to me it makes the atmosphere a little somber.