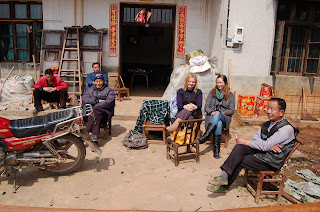 Better learning environment than the university...I should travel more!

It’s been an interesting, although somewhat boring semester at the university so far. My classmates are still all super-ambitious, and every time we are supposed to discuss something a minor war breaks out as everybody wants to TALK LOUDER AND MORE than the rest… I am still keeping my background position as I am not as aggressive as them by nature. Although I guess that's fine.

What are not so fine, however, are our teachers. The old woman who teaches us in grammar class probably has a good intention, but her constant nagging about us needing to use finer and better words in our essays is getting a bit tiring. Also, she keeps talking about ‘gao ji ban’ (high level Chinese class) as if it is some sort of unreachable, distant planet that not all of us might be able to get to. I don’t get her attitude at all? Shouldn’t she be supportive rather than trying to push us down? Then there’s the fact that she rarely lets anyone but her favorite students (A-student girl, of course) speak, which also wins few popular-points from me. We had her first exam the other week and 3 weeks prior to the test she started talking about how hard it was going to be, telling us that we all probably wouldn’t pass it. And sure, it was hard. But I have seen worse. Also, I don’t get the whole point of first ‘scaring’ the students saying ‘this exam is going to be so hard so hard for you!’ and then the day before the exam telling us ‘not to worry or take too much pressure from the exam. It’s just a test after all!’

Well hello, Miss Contradiction?! Also, isn’t she a little bit too old to go on like this?

Still, our grammar teacher is miles better than our spoken Chinese teacher. He’s still in love with his own voice. I think some of my classmates actually went and complained about him to the head office, because about one month ago another teacher came in to sit in and ‘observe the class.’ And what happened then? Well, of course we were asked to make sentences, read texts and be all involved in our teacher’s (normally one-way) discussion. Also, during the last 30 minutes of the class we got a chance to sit in groups and discuss certain topics! It as a total novelty. That lesson was probably the best (of his’) lesson I have had so far, but since that time it hasn’t happened again. And no other teacher has come to ‘sit in and observe.’

I would like to continue studying next semester, but I would love to change institution or maybe get a private tutor or go to a smaller private school (although most of those ones are insanely expensive!). Problem to go through with this plan, however, reads: visa. So as it looks now I will go on at the university next semester too. Fortunately I am still doing a lot of language exchange etc, so I still get to practice what I learn. I just wish all those hours I spend at the university all day would be a bit more... useful. And less lecture-like.
(Moving on to something different: today's morning run: 3 out of 21 days are done. Still not loving the actual running experience. Not sure if I am going to make this, but it would be a shame to give up already, although it was quite close that I stayed in bed this morning when my alarm rang. Anyways, I went out there, on an empty stomach, and the beginning felt a bit easier than yesterday... although again, the last 10 minutes were awful. Strange).
Posted by Jonna Wibelius at 7:43 AM

you are the silent type in the class? really????.... I always thought you'd be the feisty one by judging the way you talk on this blog.

incognito -sure am... :) Never been the aggressive kind. (Only when someone eats my chocolate)

Good luck with your plan Jonna! Everything comes down to the visa in the end doesn't it? I'm stuck in my job while I decide exactly what to do, because if I leave then I have no visa.

Thanks Chris. Yeah, in the end, it is all about the visa. Gotta miss the freedom of Europe where moving around and staying for as long as you want, doing whatever u want is actually possible... (within the Europen union or Scandinavia for me). I never even have to show any passport when travelling between Swe and Fi... ahhh love it.