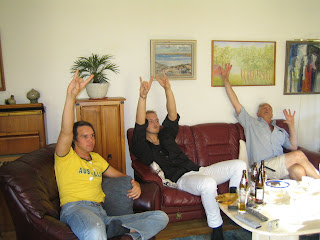 Yeeeey! sometimes things go your way! (this is how I am imagining my little brother, his friend, and my dad to react when they find out about my news... -I mean, if they could be so happy to watch Sweden score in some football game I am sure they can do the same for me.... right guys!?)

Oh what a week, this has been one of the craziest and busiest weeks of my life I believe… and it’s not over yet!!

Yesterday I had a ‘job interview.’ I won’t call it a real interview because it was more supposed to be a ‘talk/discussion’ about possible cooperation and it was going to take place at my local Starbucks. So yeah, a ‘job interview.’

We were supposed to meet at 5pm so obviously I planned my day around this. I was aching for a workout so at 2.30pm I went to the gym to do a pretty hard running session. I warmed up, did 30 minutes of intervals (with a high incline), lowered the speed and cooled down, then finished with a 15 minutes sprint. All in all it became something like 6,2 miles in 55 minutes. And I was SOAKED in sweat when I was done. I almost fell off the treadmill! But it felt so great I almost wanted to continue for an extra half an hour. And that’s just the best feeling….

I did a long stretching session and then went into the changing rooms… it was around 4pm when I looked at my mobile and saw a missed call from the people I was supposed to meet at 5pm. I called back and was told the following:

-Eh, hey Jonna, can you make it to Starbucks now already? We are already here waiting for you.

-Yeah, change of plans. Can you hurry up? The big boss doesn’t wanna wait…

Oh my lord! This is just SOOOOO CHINA! I was something between furious and mega stressed when I hung up. I broke all possible traffic-common-sense-rules when I rode my bike home (must have also been a new time record despite the fact that I had the wind against me), then threw myself into the shower. Although the things is… I was meeting with a ‘potential employer…’ So I didn’t want to look like pure shit! I still had to wash and blow try my hair, put on some nice clothes, some make-up etc… Sure, I am normally quite fast when it comes to this, bit still, it was a bit of a hassle.

I didn’t have time to eat and as a result of me stressing like an idiot, my post-running after-sweat session became a bit overwhelming. Although I made it to Starbucks by 4.40pm, I realized when I sat down that I was soaked in sweat… again! It was as if I had never taken a shower… Ahhhhhghhhhh!!!! Not the kind of first impression you’d like to make?!

Since I was sweating like a pig the boss thought I was nervous! Oh the pain! Because that’s one thing I wasn’t. More like, pissed-off. But I couldn’t really tell him that could I?

He knew about 2 words of English (hello and goodbye) so the interview (which, by the way, was more like an interview than a ‘casual talk’ –anyone surprised? I am not!) was entirely in Chinese. Interesting. So now I’ve tried that too. And now I know that there are definitely things I need to work on…. Most of the things I wanted to say I could say, but then there were other things that I believe got lost in the language jungle. Oh well….

All in all it went quite OK, because I am now going to do a test-job for them (it’s only part-time so I am going to continue studying as well –not giving up that one at the first place!) and then we are going to decide more. I bet you are all wondering what kind of job it is, but I’d rather not say too much before I know how it goes or until I get some more details… so bare with me. Although it is NOT the Suzhou TV station… haha, I am not THAT fast!

Only problem is that my lovely sister and her husband-to-be (getting married in October –guess who’s going to be the maid of honor!!!) are coming here TODAY and staying for a good 10 days. So the timing of this job isn’t that good. But then again –is it ever?! I’m still quite excited about it all. And, I am feeling happier than I have done for a long time: visitor from home (and not just any visitor, but my dearest sis!), running is going well, AND I have a potential job to look forward to! Life can’t get much better than that. Have a great weekend everyone!
Posted by Jonna Wibelius at 6:21 AM

Ha ha, in his defense, he DID try to contact you to re-arrange the meeting schedule. This is why I always bring my iPhone when I hit the gym. I can listen to music AND not miss any important phone calls.

I can't even imagine how frustrated/mad you were at that guy for moving the meeting up an hour! I would have a hard time being civil after that. Good job, I hope the job works out well!

And have fun with your sis! Mine is over there in China right now too.

First of all, congratulations of the test job. Well done! I really hope you enjoy it and feel that it goes well.

Second, your story about the time mix up even had ME pissed for a minute. But as you say, SOOOO China. We choose to live here, so I guess we have to take the bitter along with the sweet. :)

Please say "Hi" to your sister for me. I hope you all have a great time together.

Wow, Jonna, you are knowing better and better about China, it's China. Deep Red China, maybe, just……
“husband-to-be”, it is called "毛脚 女婿máojiǎo nǚxù" by girl's parents and other relatives in Shanghainese. Maybe the same in Suzhou Hua.
This weekend(tomorrow) is the Tomb Sweeping Day（清明节Qīngmíngjié）, sweeping and clearing dead family and ancestor's tomb. New tomb buring is forbidden now.

Do you know another girl from you country, whose chinese name is 李琳（I forget her real name）, there is a book "金发碧眼看中国" written by her, tell about her Chinese learning experience in Beijing and seeings and opinions about China. I suppose it's a good book from "Laowai's" view.

Good luck with the job! Can't believe they did that to you, I would have been a nervous wreck with everything that happened. Have fun with your sister!

I am so sorry for the stress! Sounds like Murphy's Law was in effect today. I hope you have a wonderful time with your sis, though. Tell her congratulations, I wish her all the best in this new stage in life!

You met at Starbucks! That's funny. Here in Changzhou, Starbucks is THE place to meet.

I hope you mentioned your punctuality in the "interview" lol time keeping seems to be an issue over their. Congrats on all the good stuff hope it keeps coming, love your blog btw gives me a break from work for 5 mins everyday

Everything sounds so exciting! Great job handling the entire interview in Chinese!!

WHAT!!??? no catfight? no quarreling? no fraying?

pssst... what happened to the feisty Jonna I've heard of? I guess you've finally gone soft and compliant like the meek girls in China! I am extremely disappointed, or maybe it's a good thing? hahaha

sounds like an eventful day. glad it worked out for you. good luck and hope you enjoy the part time gig in China. Have a great weekend.

Good luck for the job and I really can't imagine how frustrated when they said want to meet you now!!!!Anyway, you have make it :)

cheers guys! Im in shanghai so typin w my bf's iphone..too slow! But just wanted to say thanks for all ur comments! Still in a happy buzz! :)

I'm so happy for you!

I just recently got married and if you need any online resources for anything wedding related, let me know!

Ha, yep sounds *so* China, but glad it all went well. Hope you're having a great weekend.

I've been away for a few days and am just catching up with your blog. Sounds like a very hectic time! Not sticking to meet-up times is so typical here, it can be an hour or two before or later. It's happened to me a couple of times, but never for such a stressful thing like that.

Good luck with the test job.