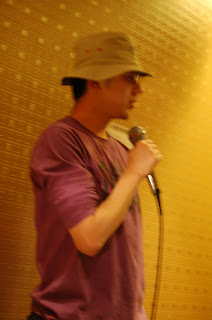 Singing is great, but surely it sounds better if the verse and the chorus are in the same language, no?

Yesterday we did the funniest radio show I have done this far. We did a music feature where I picked 6 bands/artists from China, played 15 seconds of their music, and then my 2 workmates (who know nothing about Chinese pop and rock) had to give a score/some feedback about the songs. In order to make it as natural-sounding as possible (we don’t broadcast live, unfortunately) none of the guys had heard the songs before they sat down in the studio. Hehe.

The funniest part was probably picking the songs. China sure has some interesting artists/bands. One thing that hit me when I was listening through an endless amount of young, bubbly girl-pop (some sounding like worse versions of Spice girls than others…) was that man, there’s a lot of Chinese artists/bands that sing a whole song in Chinese, only to throw in some English phrases/words during the chorus?! It sounds quite silly, and I have no idea what the idea of this is? To my workmates, who don’t understand a lick of Chinese it sounded even MORE silly, gosh, one guy laughed so much tears started running from his eyes when we listened to the song 一半女生 –I ban nv sheng- by the Hong Kong duo ‘Twins’ (one of my worse choices, but we needed to have a good mix of good and bad!) who sang their whole verse in Chinese (something about growing up and not being a woman yet but also not being a girl…) and then went: “Bye bye bye, bye bye happiness!” in the chorus and resulted in an instant laugh attack from my colleagues.

Anyways, in the end we had some high and some low scores. The highest score went to the Beijing punk band Recycle, followed by Taiwan male singer Xiao Gang (小刚 I think that’s his name??) The worse score (one 1 and one zero!) went to the band ZERO (零点), some rock band from Beijing who did not impress any of us with their song 从0开始 (begin from zero).

We’ll definitely be doing this sort of music feature again, so if anyone has any fave Chinese artists, or any examples of when rock/pop goes bad (unfortunately those are almost more fun than the ‘good ones’), please feel free to open up!
Posted by Jonna Wibelius at 11:46 AM

Japanese people love to put English in their song. Most of the time, they don't even bother looking up what they write. Even when it makes sense, their Englis pronunciation is so bad that you have to actually see the lyrics on paper to realize it was English all along. Sometimes tho, you get something good. Sometimes...

There's this one by Twins (don't know what it's called) that has some lyrics about strawberries, berries, apples, and oranges. I think they also mention fried rice and some other foods. Not sure what it's about, but my sister and I crack up everytime we hear it. Also, there is a funny song by Jin that's a rap about going to Dim Sum. He's an American though, so I don't know if that counts. (It's called Yum Dom Cha, drink some tea in Cantonese).

try this one, GALA是一支来自北京的年轻英式摇滚乐队, you have to read the lyrics(http://www.lrc123.com/lrc/282864-257055.html) to know what they are singing about(they sing in English) http://news.bjsjs.gov.cn/jxbbs/images/upload/2006/11/22/102259.mp3. And also this one, if you understand this one that means your Chinese is definely very good. www.youtube.com/watch?v=Y-oalJxAdOs

How about Xu Wei? This guy does not put English in his songs. He's good. http://bjbarefeet.blogspot.com/2009/04/whos-leading-figure-of-chinese-pop.html

as a hongkonger, i feel so embrassing that Canton-pop give this feeling to you... Twins....

I think the mix of different language is very common in Chinese pop, as influenced by HK-pop, the common practise of what HKG people talking. mix with Cantonese and English is just an examples.

i would introduce "Jay Chou" or old band "Beyond" to you.

hey people, thanks for advices!! :) We'll have plenty to choose from for our next music panel!

This is another topic to my interest. I would recommend Faye Wong(王菲), she is my all-time favorite female singer. I also recommend Jay Chou (周杰伦), the pop king in Mandarin music industry for almost a decade. His every album is a great hit! And he never put English into his lyrics.

How about listening to Qi Qin (Chyi Chin). I don't speak a word of Chinese, but I am a huge fan. He sings with such emotion that his beautiful voice certainly proves that music is universal. Some others I enjoy are (of course) Wu Bai and China Blue, Wang Feng, and Zheng Jun. I could go on........I am a big fan of Chinese artists.

PS: Don't forget to check out Qi Qin's sister-Qi Yu (Chyi Yu). She has the voice of an angel.

Really? they mix it up? Too funny, now I'm going to have to look some of this up! Thanks for the musical info!

I guess what's normal is weird to other cultures. Having to live aboard all our lives. Most asians speak half/half in our daily converastions mixing english and chinese into our conversation since we are so used to speaking both languages. Yes, alot of songs have mix together phrases of english into the songs and sounds quite normal to the asisn population. I agree with Mantse that it's a bit embarassing to see how others perceive as funny what we see as normal. No hard feelings though. Being made fun of in our dialect has been a normal ;D

MayDay
They are from Taiwan.

Don't forget S.H.E! It is the most popular girl group from Taiwan, TWIN's long-term rival but has a much better singing. The band's name S.H.E comes from the initial letter of names of the three members who are Selina, Hebe and Ella. It is funny that Jonna also chooses the name SHE for her blog:)
S.H.E started out by covering songs of a German pop group called Sweetbox and released some English albums covering many famous English songs in which S.H.E has a pretty sound pronunciation. They have many original Chinese hit songs too.

Your post makes me wonder where the trend of mixing English into pop music started from in Asia. I've noticed a lot of this not only in Chinese music but also in a lot of genres of Japanese and Korean music.

It may have started in the Philippines, where Taglish (Tagalog with English words) reigns, music as in everyday life.

I would like to recommend a young and talented Shanghai female singer 黄龄's song "痒", "high歌". Her songs are so sexy!