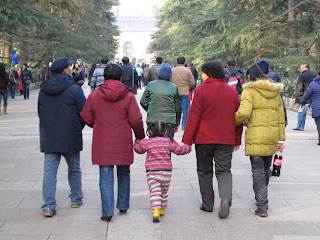 One of my Chinese teachers constantly expresses her worry about China’s youth being “too comfortable” and “too spoiled” nowadays. To draw on her example she showed me an article from sina.com last week, about a 14-year old city girl who had become sad and depressed when her parents told her they were thinking about having a second baby. Instead of being happy about getting a sibling, the girl went the complete opposite way: in school she became silent and withdrawn, and she then used her QQ (Chinese version of ICQ I suppose you could say) to write sad and depressing texts, posting them online.

Eventually she wrote her will and included some of her last wishes: “Dear mom and dad, please bury me in fashionable, beautiful clothes.”

That’s around when journalists found her and the whole story blew up. The young girl said she didn’t want a sibling because she was scared the attention she got from her parents, as well as grandparents, would be redirected to the new baby. An “expert” was asked to comment on the issue and he ended up advising the parents against getting a second baby, UNLESS the daughter came around (I guess we can all assume that she won’t).

Pretty serious stuff huh? Well at least according to my teacher who expressed her concerned about Chinese children of today more or less “rule” their parents. I could not agree more. Posting your “will” and your “last wishes” online isn’t really the normal reaction to your parents telling you that you’re about to get a sibling. It will be interesting to watch this generation grow up and see how they handle real life as grown ups.
Posted by Jonna Wibelius at 7:30 AM

The same thing is happening everywhere: kids are totally ruling their parents. In Japan the mothers live according to the wishes of their kids. There is no control. I see the results with my students: they want everything but do not wish to make any efforts.

That's pretty hardcore stuff.
I always get confused when a Chinese person talks about brothers or sisters and always have to check with them whether they mean biological brothers/sisters or cousins. Gets me every time.
It sounds like you're having some interesting discussions in your class. Your teacher seems to be bringing interesting discussion material into class. I'm envious..... ;)

Kanumur -really? You see this happening everywhere? I seriously cannot see the same thing happening in Sweden. Sure, I remember when my folks told me they were gonna get us all a little brother (at that time I was the youngest). My older sisters were thrilled but I wasn't. I was like... "naaah, we don't need one more"... but did I tell this to my folks? Oh no. And would they have listened anyways? Oh no! Then my little brother was born and I LOVED him from day one, I became his extra mom... haha! So funny how kids work. I don't really see this thing happening in Europe. But maybe in Asia it is becoming more and more common?

LittleTiger -yeah the "my sister" thing confuses me too, especially since no one here knows the word "cousin"... My teacher is great yeah! We discuss everything: Cultural revolution, one-child policy, pollution.. everything. She's not one bit biased. It is wonderful.

I've been hearing this sort of thing about the spoilt children of China for quite a few years now. Other countries like Singapore also moan about how spoilt and pampered the kids are these days, although none have gone so far as wanting to commit suicide for some attention.

I've probably met about 100 people under 30 who are from China (I met most of them all outside of China itself though) and I can only think of 1 who I'd called really pampered and spoilt. Quite a story with him, and I use it to hang over his head whenever he gets too snippy or arrogant :)

What have you noticed Jonna? You've met quite a few under 30yo ppl from China. Do you find they're attention seekers. spoilt and materialistic compared to under 30yo people from around the world you've met in your travels?

Maybe, just maybe this is an example of an extreme case? Because while I'm sure kids feel threatened by the idea of sharing their space and affection, I don't think they go around posting wills or funeral details.
And I also think the 'experts' need a refresher course on whatever it is that they are experts in, because instead of helping the girl (whose reaction clearly shows she's off-kilter), they're actually pandering to her insecurities!
AND, why blame the kids? They're products of their up-bringing. The parents pamper, spoil and pamper a little more, but when the kids finally get out of hand, they blame an entire generation.
Thank god I'm not a kid anymore, we're the biggest group of maligned people ever.

adrian (and Anadi)-Well, I would say I have met some Chinese people that are used to getting their way. Only girls though... But then again, I have met the same kind of people in Sweden, Australia, England.. so it's nothing unusual or unique. However, seeing that China's population is so big, it is obviously a bigger problem over here. Some people say that China's increased divorce rate can be connected to the fact that China's kids of today (obviously not all kids, mainly kids to folks with cash) are too used to getting things their way. When in a marriage, they cannot always get things their way, however... and as a result, the marriage fails (as no one gives in). I don't know what to believe. It personally bothers me when I see kids getting seats on the bus meanwhile old people have to stand up, but it's obviously not the kid's fault! The kids don't know anything, we teach them how to behave... So let's see how the generation grows up. I think we have to wait some years before we can see the total effect.

Anadi -I agree with you, thank god I am not a kid today! I also have to add that the kid's environment seems a lot "rougher" now than back to when I was a kid. I played with toys until I was 9! 9-year olds of today mainly play with their computers.

This happens in every single culture...I can imagine this was built into us. Think about it from an evolutionary perspective: when will your chance of survival be the greatest? When you are a single child or one of many?

Pingu -Well seeing that we have moved quite a bit forward from back then I only accept that point of view if you are coming from a real poor family. I come from a big family and I would not trade my siblings for anything! I'm so glad I have them, they mean everything to me.

Just the other day, one of my students ran up to me in class to tell me that her mom was going to have a baby. She seemed really excited. So happy to be a big sister.

Hmm I came from a big family and I know for a fact I wouldn't have mind being a single child.

10 years ago people were worrying about us as "collapsed generation". Although I myself hasn't grow as a successful person yet, I don't think I am going to collapse. I knew we are actually 坚定，善良，有修养。Most of these characters were gradually learned from life experience. For the next generation, I can see the hope and trouble, and I believe they can achieve our expects and solve the problem.

tripfriend -yup, fortunately not everybody sees a baby-sister as a threat :)

Cinnabon-Really?! I remember sometimes wishing I was the only kid when I was maybe...9 years old and when my older sister stole my candy. But now when I am older I am so happy that I have such a big family.

马麟 -I obviously hope that too.

I think being spoil or not really depends on each individual. Most of my Chinese friend are not spoiled at all. Girls tend to be more spoiled than boys, but this is the same case here in the US.

I am the only child in my family and my parents never spoil me, in fact they always give me tough love. My mother is well educated so she knows how to take care of her kid, and because of this I made it to a top university in the US :)

I have met many people from Taiwan actually admire China's one child policy, they think that since China is not that wealthy, people should only have one child, that way they can stay focus. Quality control, I guess.

i cant agree with you more! great insight. amen x

Coming from a Chinese-American family, I was born and raised in the US. The thing I noticed is that children coming from wealthy families in China are the spoiled ones. Mostly I think it is the culture in China that has made Chinese children who they are now. This girl who goes to school with me that was born in China and moved to the US about a year ago brought a two thousand dollar watch for her crush. Where does she get that money? Well of course it's her parents! As parents, they should teach their children to earn their own money and become independent so STOP SPOILING YOUR KIDS!!!!

These days we have many spoiled children, even i have in my class very spoiled teens, believe me a 13 or 14 year old student cry when a teacher yells at him!!! Dude, Grow up and stop crying, people must be men not spoiled! with my respect to Today's Parents " Stop spoiling your children, you must teach them how to be men!"

Old China and Japan they were not spoiled, they were men! We must be like them!!