Everything comes to an end 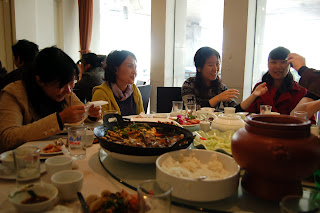 Yesterday I had my last lesson of Chinese at Xi’an Jiaotong Liverpool University in Suzhou. 2010 is going to be a very different year and one thing’s for sure, I won’t be taking any more Chinese lessons. Exactly what I will be doing is yet to be confirmed, so I’ll wait until I reveal the details. But it will be very different from what I’ve been doing in China so far, and it will most likely include a move to Shanghai (yeeeeeey!). Since Woai and Shopgirl revealed to (the ignorant) me Baskins and Robins is now in Shanghai (something I’ve been waiting for since I came here) I simply cannot stay in Suzhou any longer…

It’s been a quite dull autumn except for all the travelling. Too many flues and allergy reactions. None of that in 2010, please.

Studying solo at Xi’an Jiaotong Liverpool University was great at first, but after a while it felt a bit lonely and I started to miss having uber smart classmates that pushed me to study even harder (‘you don’t know what you’ve got ‘til it’s gone’). Getting private lessons has probably done a wonder for my spoken Chinese, but little good for my writing-Chinese-characters-ability. Oh well, can’t get it all. At least now I can proudly say that I have tried quite a few education options in China: 2 months at Shanghai University (very good), 1 semester at Shanghai Jiaotong University (not so good), 3 semester at Suzhou University (good in the beginning and then I sort of got over that) and 3 months of studying solo at Xi’an Jiaotong Liverpool University. With that in my luggage I suppose I am ready to take on the next challenge.

I still get tonnes of emails from people who wants to learn Chinese in China. It’s obvious that there is a huge interest for learning Chinese amongst foreigners. I wonder how long most people end up studying. When I look back at how much time I’ve put into studying the Chinese language I realize that it’s almost as long as it took for me to get my BA degree in Australia! Insane. Especially the fact that I’m still much better at writing articles in English than speaking Chinese…

Before I get on with the challenges of 2010 I’m going to Sweden (flying early tomorrow morning) to celebrate Christmas and NY with my near and dear ones. Can’t wait to see the newly weds, Charlotte’s baby-boy Sam, my brother and my parents! Ah, it doesn’t matter how many years I spend abroad: the best thing about it all is always going home!

This Christmas I won’t prioritize blogging, but there might be a post or two if I find something interesting to write about. Happy holidays, everyone!
Posted by Jonna Wibelius at 6:15 AM

I wish you happy holidays and a wonderful 2010 Jonna! I will be moving on from China to a new job that will mean spending 6 months in Australia and 6 months in Canada, so I look forward to getting my China fix through your blog! All the best!

Very happy holidays and a awesome 2010, Jonna! I hope everything will turn out OK with moving to Shanghai and such! Wish you all the best!

Enjoy your time in Sweden! :)

Have a Merry Chrismas and Have a good trip, Jonna.

I am used to check your post everyday. Hope I can see your new posts during the holiday.