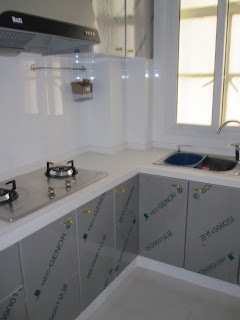 Another one bites the dust

Saturday morning. Jonna is not feeling well due to something that has to do with Absolut Rock vodka drinks. But there’s no such thing as lingering in bed on a Saturday in China, because rise and shine, at 9am it’s “knock on your door”-time.

Unsure of what I was thinking I opened the door wearing blue, men’s PJ pants, an oversized jumper and with my hair looking like a badly made bird’s nest on top of my head.

The young, perky looking Chinese guy outside my door, however, barely noticed my state of mess:

Gas meter… gas meter. Vague memories of me washing my face in ice-cold water the night before and sending angry text messages to my landlord suddenly started to play in my head. (Note to self: don’t text your landlord when you’ve had cocktails. On the other hand: nice work Jonna! You told him well after midnight and by 9am the next morning he’s already sent someone out to change the gas meter?! Not bad for being a landlord that took 4 days to get me an internet connection despite first promising to do it straight away).

-So did Mr Yang called you? I asked the young, perky Chinese guy who was already well underway with changing my gas meter.

-Mr who? No Mr Yang. I am just changing the meter for you.

Now, I’m definitely not kitchen-device-smart in any way, but as he was pulling and twisting that gas meter of mine, it suddenly hit me….

-Hang on a minute? Isn’t it the water heater that you should be changing?

For a short moment, the perky guy’s eyes went blank.

-I am changing the gas meter. Later someone else will come and change the stove.

-How about the water heater?

A terrible moment of complete confusion hit me. The perky guy went on meanwhile I, feeling rather perplexed, grabbed my phone and started to panic-type a sms to my landlord.

“They are changing the stove and the gas meter. The water heater is broken. What is going on?”

The perky guy left holding my “old” (I say “old” because it was practically new, hence my hesitation to him exchanging it) gas meter under his arm and slamming the door after him, leaving me with a:

-Don’t go anywhere! Someone will come and change your stove soon!

-Why? I managed to yell after him, suddenly feeling an instant urge to understand what on earth was going on. I ran up from the couch (where I had parked myself, oblivious to what else to do) and opened the door and there, straight in front of my eyes was a bunch of other perky looking young Chinese guys walking around, one of them with a gas meter under his arm and on his way into my… neighbour’s flat?!

-What are you doing? I demanded.

-We are changing the gas meter! One guy said.

-Because…. Miss, have you not seen the note downstairs?

-Yes, the note saying that we are changing all gas meters, stoves and water heaters in your building today? You should remain at home because people will come and visit you throughout the day. If you want to choose what kind of stove you want you can go downstairs to the yard and look at the different types on display….

Nah, I’m not even going to try that. I had not noticed any note. In fact, I had deliberately not paid attention to any notes when I had arrived home from the office, late every night, tired and hungry, wanting so much for the slow elevator to move faster and take me up and definitely not wanting to pay any attention to notes about gas meters or anything else for that matter.

I had completely ignored all kinds of notes.

(Well, how is it that it goes again? You learn from your mistakes?! Yeah, something like that!)

I ended up spending Saturday inside waiting around for people to come and change things in my kitchen (around 3pm they were done with everything. By then I was so hungry I was about to drink the expired milk in my fridge). The hot water arrived sometime around 2.30pm and my landlord came around 1pm.

-Jonna, did you work till midnight last night?! He said, looking as if he had seen a ghost at the sight of me.
-Working? Eh, yes. I lied, simply wimping out and refusing to admit that I had in fact been sending drunk-text messages to him.

The story ended somewhere after that, by the time my kitchen floor was close to black as a result of 8964982634 more or less perky (but all very dirty) guys being in there changing everything that they could change. Sometime around 3.30 I enjoyed a delayed breakfast/lunch and then Saturday started.
Posted by Jonna Wibelius at 6:00 AM

Not a nice morning call! Expecially after a night out... Do you have the hot water now?

lesson learned, for you and for me.

When i will arrive to Shanghai i will always look at the notes hahaha.

The stove is pretty nice btw :)

if your landlord is living nearby, he should give you a call or text you about the stove changing thing. But I am curious, why the hot water is so hard? You have water heater right? You can have hot water anytime.

Those overly perky contractors can be very irritating especially when you're hung over and desperately wanting a quiet Saturday to yourself. My sympathies.

hehehe... congrats on the move to Shanghai...

Are those your kitchen cabinets, with the fugly writing??

Coincidentally i just installed the same rod and basket in my own kitchen this weekend, made in china from IKEA! The parallels to your life are astounding :)

Tarja -yes, the hot water made a return on Sat afternoon, thank god!

Bere Tarde -Hehe, yeah, from now on I will also reado notes (in the elevator) religiously.

Neil -I'm a long-post-kind-of-person ;) Well the hot water had obviously been turned off the night before as they were changing all the heaters, stoves and gas meters in our building. Now it's back to normal!

momcat -they sure can. Hoping not to see them again this Sat.

Reluctant -that's my kitchen yes!!! :) I have now almost removed all the ugly plastic covers from the cabinets. Not as easy as it sounds.

Hi, Jonna,
My friend Daniel will soon go to Beijing for work. He asked me about the work visa stuff but I know nothing. Can you explain a little to him? I gave him your email.
Tack så mycket！

马麟 -u should tell your friend Daniel to 1. contact the Chinese embassy in Sweden (or the country where he resides) and get all the info from them. Then, 2. if he is going to BJ from work his office should help him with whatever necessary documents. I am def no visa expert so it is best to ask the people who know namely the embassy. They also have heaps of info on their page. He will find them if he just googles for a bit.

Wow. You have a real kitchen.

Cool article as for me. It would be great to read something more about this topic. Thnx for giving this info.