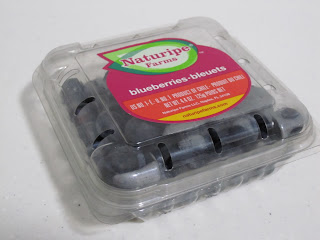 Mmmm, blueberries! Not that easy to find in a city like Shanghai. Oh-so-good but oh-so-expensive, especially if you buy them in a western food shop like Cityshop. One box, same size as the photo (not sure about the brand, didn't look any closer) was priced 48 rmb/box when I was there last wknd.
Then, you head to something mid-range, like the huge supermarket Carrefour (which has a rather modest "imported food section") where the same box sells for 32 rmb/box?!
Already here I could no longer resist the temptation and bought a box telling myself that "I was worth being spoiled for one day" (would not think twice if it was chocolate).
On the other hand, I found the price difference between Cityshop and Carrefour rather interesting. Is that the reward you get for being crammed together with hundreds of Chinese while shopping (=Carrefour) rather than being able to push your trolly in empty aisles (= Cityshop): Slightly cheaper blueberries?
Well if that's the case then it's not even worth it. Walked by a fruit stand at Ulumuqi Lu last night and saw, believe it or not, the very same blueberry box!
-How much, I asked the vendor.
-xxxx, he said.
I instantly bought 2 boxes feeling not the slightest of guilt.
Now the one million dollar question is: how much did the vendor charge for one box? (Remember that I'm a "stupid laowai" so I was probably overcharged -and still it was cheaper than in the supermarkets!).
Point to be made: it really DOES pay off to do your shopping on the streets rather than in the supermarkets. 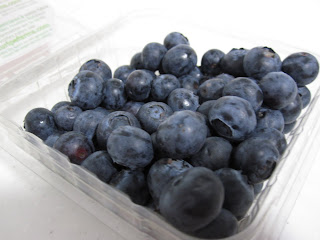 Posted by Jonna Wibelius at 6:00 AM

It's the same in Hong Kong. CitySuper (nose in the air kind of place)will sell an imported Australian mango for HK$45, ParknShop will sell it for HK$25, and on the street it's much less. But who wants to go comparing prices all across HK? Who has the time?

Richard -true, true. It is just funny I think how everybody keep saying that SH is "soooooo expensive": rent, food prices, restaurants. But I actually don't think it is. Not if you look for cheaper options that are obviously available. It was the same when I was house hunting. Most agents showed me 10,000 rmb/month flats even though I had specifically said that I would not go over 8000! In the end I found something for less than 5000! But yeah, it took some time and persistence and maybe u r right -who's got that sort of time on their hands? (well I did up until last week)

Yes I have noticed the same thing. Dowstairs we have Hua Lian a local shop. There you can find vegetables from "City Farm". Gues where the vegetables sold in City Shop are produced... allso "City Farm". But there is a huge price difference! It's the same product!

One of the reasons City Shop is so popular is that most of the nationalities get discounts. Not the fins (yet) but americans, germans... I don't know about the swedes. But the discount doesn't really cover that it's really expensive.

But there is a good side in City Shop. They have excellent baby food selection! And you can find cider =)

It's also the same in Singapore. Giant seems to carry a lot of imported goods and the prices are high. Cold Storage has less imported goods and more moderate prices. But, if you don't mind shopping with everyone else you can find good deals in the regular supermarkets.

Your story also reminded me of when I was in a town outside Manila, in the Philippines. A street vendor tried to sell me a pack of smokes for 37 PHP. I went into the 7-11 that was just a few buildings down and bought them for 34 PHP, and you know 7-11 has a high mark-up. The street guy is supposed to be cheaper, but he wouldn't budge on the price just because I'm a white guy.

The cost is different, Jonna. Fruit stand is surely much cheaper, they do not even pay the tax.

Never saw blueberries for sale on the streets in Shenzhen. But did see them for about 60 kuai or so in the stores.

It's nice to be back home where I can find blueberries growing wild in the summer.

If I have to pay 10k/mon, I'd rather live in hotel. The cost would be similar, and I got service.
Big cities provide diverse level of expense environment, targeting different people. I think it's normal. I told my friend in Beijing he can find restaurant cost from 5 to 10k, that may prove it.

Here in Toronto, Canada the same box of blueberries are around $2CAD/14RMB.

Tarja -Don't get me wrong -i'm a huge fan of city shop's range of products! They have the best chocolate in town + a lot of other good stuff. Just wish their soy milk was a bit cheaper. I had no idea that people from different nationalities get different prices?!? Huh?

Brad -I guess it's just how it is. Like Richard says, most people don't have time to compare prices anyways.

anonymous -oh, that's quite a difference from Perth?!

Matthew -yeah I also prefer when u can pick them by yourself... at no cost but time! :)

马麟 -yeah, I bet a looooot of people here are overpaying for their flats.

Anybody knows where to find wild blueberries in China?